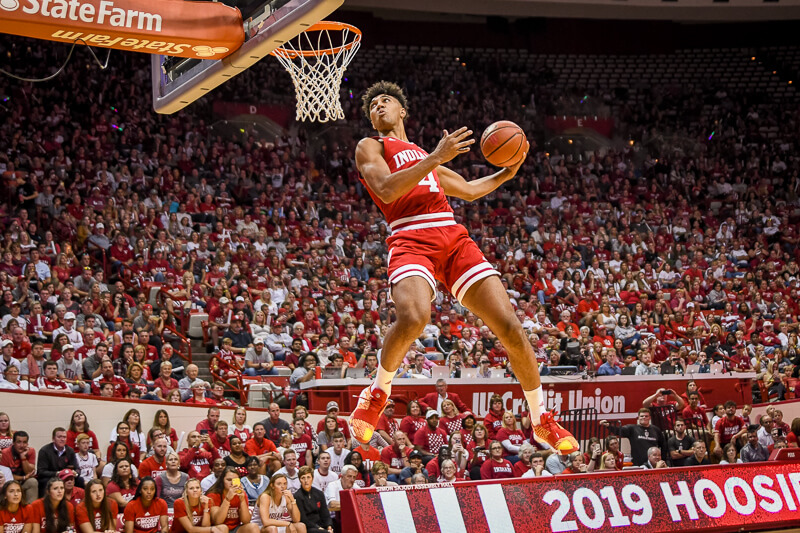 After the surplus of Indiana basketball news that came from the program’s media day, Big Ten media day, and Hoosier Hysteria all taking place in recent weeks, it was a bit of a calm period for Hoosier basketball news over the last few days.

It was a chance to take a breath and take stock of what happened at those events in relation to the coming season, while also looking at the recruiting impact of last weekend’s festivities in Bloomington.

With Indiana’s exhibition against Gannon University only a few weeks away, Inside The Hall has begun its player profile series, taking a look at all 11 Indiana scholarship players ahead of the 2019-20 season.

So far, the series has covered Armaan Franklin, Trayce Jackson-Davis, Jerome Hunter, Race Thompson and Damezi Anderson, with the remaining scholarship players to come in due course.

While Rob Phinisee hasn’t been featured yet in the Inside The Hall series, he was the topic of this week’s edition of Assembly Call Radio with Andy Bottoms, Jerod Morris, and Ryan Phillips.

The trio touched on the skill and production jump Phinisee could take from his freshman to sophomore season, and how dependent Indiana’s success will be on him.

While it’s only been a week since Indiana’s annual kickoff to the basketball season, Inside The Hall has already caught up with two recruits who were in attendance to get their immediate thoughts and takeaways from the event.

Class of 2021 power forward Caleb Furst from Fort Wayne, Indiana came away from Hoosier Hysteria with a sense for how “well equipped” the Indiana coaching staff is, while Class of 2020 point guard and IU commit Anthony Leal was struck by the scene and the fact that he will be a part of it in just a year’s time.

“I kind of got some butterflies seeing the guys get their names announced and stuff and just thinking that was actually going to be me next year,” Leal said. “So, I think it was really cool to actually picture myself being there and actually know it’s going to become a reality next year.”

Podcast on the Brink with ESPN’s John Gasaway

Like Indiana, the other 13 schools around the Big Ten are well into their preparations for the new college basketball season, including Illinois.

The Fighting Illini have high expectations this season, Brad Underwood’s third at the school, despite not making the NCAA Tournament since 2013.

ESPN’s John Gasaway joined Podcast on the Brink this week for a deep dive into Illinois, and he also shared his thoughts on the state of the entire Big Ten Conference.

Just like last season, Indiana will be awarding a “Gold Jersey” during the season to recognize players who are the most productive during practice.

The first recipient of a gold jersey this season is freshman forward Trayce Jackson-Davis, who now gets to wear the jersey in practice until another Hoosier proves himself worthy of taking it away.

While Hoosier Hysteria was a week ago, four-star Class of 2021 recruit Trey Patterson stopped in Bloomington this weekend for his official visit to Indiana. A 6-7, 170 lb. small forward from New Jersey, the trip marks Patterson’s first official visit, although the Hoosiers will still have to contend with the likes of Auburn, Maryland, and Villanova to land Patterson.

In news more relevant to the 2019-20 season, another Indiana tipoff time was revealed this week. The Nov. 16 matchup between Indiana and Troy will be an 8 p.m. start inside Assembly Hall. The game will be broadcast on the Big Ten Network.

After waiting nearly eight months, Romeo Langford returned to competitive basketball this past week, taking part in preseason action for the Boston Celtics.

Indiana’s newest NBA draft selection said, “It was a relief to finally just be back out there.” And as Jerod noted on Twitter, he wasted no time running the “Beat Wisconsin” play to notch a bucket.

He wasn’t the only former Hoosier playing in the NBA preseason though, as Cody Zeller (Charlotte Hornets) and Thomas Bryant (Washington Wizards) have also seen court time while preparing for another season of professional hoops.

Football came back from their bye with a dominant shutout win while other sports saw mixed results throughout the week. Assembly Call will continue to have coverage of Men’ Soccer and IU’s other Olympic sports this fall in the Assembly Call Community for those with a subscription under the ‘Men’s Soccer’ and “Other Sports” topic.

• Football raced out to a big lead and easily defeated Rutgers on homecoming. The team also formally opened the Terry Tallon Indiana Football Complex. Assembly Call took a tour of the complex and other behind the scenes spots of Memorial Stadium this week. See pictures of the new Athlete Cafeteria and Locker room.

• Men’s Soccer knocked off Penn State 3-0 to take the Big Ten lead before a scoreless tie against Kentucky. Away from the field the team got the United Soccer Coaches Team Academic award and freshmen Aidan Morris was recognized by both the Big Ten and Top Draw Soccer.

• Women’s Soccer got their second straight win over Minnesota before falling to Penn State. Also freshman Avery Lockwood was rewarded by Top Draw Soccer for her game winning goal against Illinois the previous week.

• Volleyball got their first Big Ten win over Northwestern before losing a close heart-breaker to rival Purdue.

• Field Hockey fell to Kent State before losing in the last minute to Rutgers.

• Women’s Basketball opened their season as part of Hoosier Hysteria.

• Women’s Golf competed at both the Butler and Medinah Invitational. The team is also participating in the Folds of Honor Program.

• Men’s Golf was in action at the Marquette Intercollegiate.

• Swimming and Diving opened the season against Notre Dame and Kentucky with dual meets.