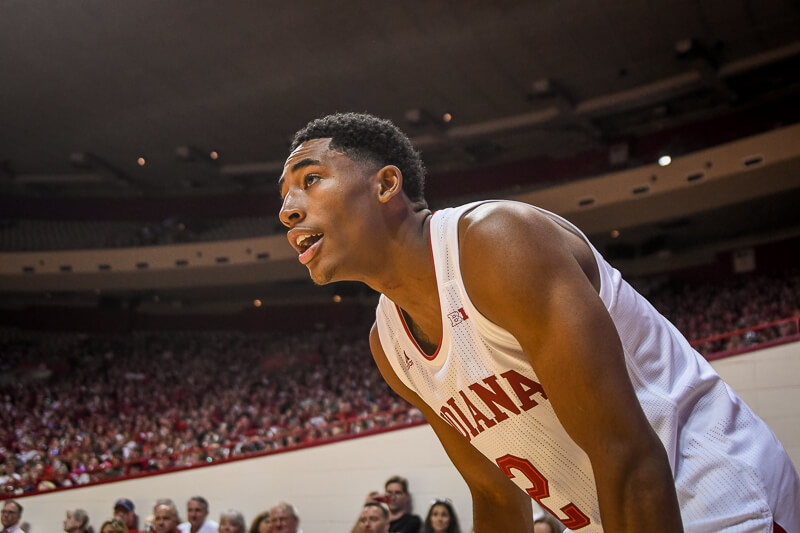 With the start of college basketball season on the horizon, we’ve transitioned from our look at other Big Ten programs to our player-by-player previews of the 2019-20 Indiana roster. Today, our player profiles begin with a look at Armaan Franklin.

The first player to commit in Indiana’s 2019 recruiting class, Armaan Franklin should have the opportunity to carve out a role in his first season as a Hoosier.

A product of one Indiana’s best high school programs at Cathedral, the 6-foot-4 Franklin was city player of the year in his final prep season under Jason Delaney. Franklin was also named to the Indiana All-Star team and was ranked the No. 128 prospect nationally in the final 247Sports rankings. He chose Indiana over offers from Purdue, Louisville, Xavier, Ohio State, Butler and several others.

On an Indiana roster that lacks depth in the backcourt, Franklin could crack the rotation early in his collegiate career. His shooting stroke from the perimeter is a definite strength of his game and his size should allow him to potentially guard multiple positions out on the perimeter.

“He is a self-made player who has gotten better every step of his progression, he’s got great size and competitiveness as a guard,” Archie Miller said shortly after Franklin inked his National Letter of Intent with the Hoosiers last fall. “He is shooting it right now as well as he ever has and brings positive energy to the locker room on day one.”

Since arriving on campus in early June, Franklin appears to have made significant gains in the weight room under the guidance of Clif Marshall, Indiana’s director for athletic performance.

The official Indiana roster lists him at 195 pounds and he won the team’s Iron Man award for his work in the preseason.

Effort. Attitude.@unkle44artty was chosen as the Iron-Man of #IUBB preseason. pic.twitter.com/Eyj09rFr8V

“Our two true freshmen, Trayce and his counterpart there, Armaan Franklin, both have been fantastic since they’ve stepped foot on campus in terms of their ability to do what we’ve asked them to do, fit in, and be productive,” Miller said last week at Big Ten media day in Chicago. “And I think through our first couple workouts here, looking at things, I think both guys have a chance to really impact our team.”

Beyond returnees Devonte Green, Al Durham Jr. and Rob Phinisee, who could all potentially start, Indiana doesn’t have another true scholarship guard on its roster besides Franklin.

While some may consider Jerome Hunter or Damezi Anderson guards, neither would be able to play point guard in a pinch like Franklin. For that reason, and because of his ability to knock down shots from the perimeter, Franklin could be in line to play a significant role as a freshman.

Bottom Line: Franklin didn’t show much in Saturday’s scrimmage at Hoosier Hysteria as he finished with just one assist, but he fits a true need on Indiana’s 2019-2020 roster. His game improved significantly over his high school career and by the summer of 2018, he was a legitimate recruiting target for several high major programs. If he can defend at an adequate level and also shoot with consistency from the perimeter, he looks like a strong candidate to crack Indiana’s rotation as a back-up in his first college season.

Quotable: “I think he can be really good, he loves the game and he’s got a great work ethic. So my job is to come challenge him to be great and to be a voice of reason. My perspective with Armaan is ‘You’re responsible for how good you’re going to be. So put in the work, don’t buy into all the hype. If you put in the work, the results will come. If you don’t put in the work, then you’ve got nobody to blame but yourself.'” – Franklin’s aunt and former WNBA player Coquese Washington to Inside the Hall earlier this year.