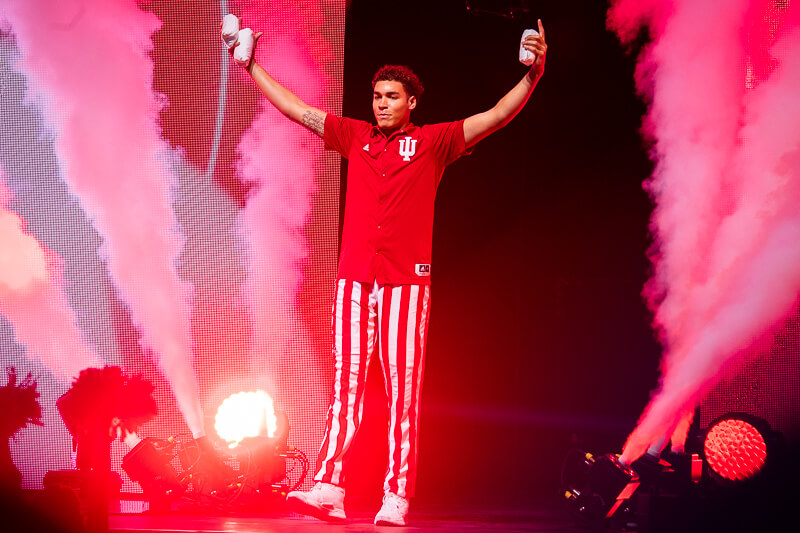 With the start of college basketball season on the horizon, we’ve transitioned from our look at other Big Ten programs to our player-by-player previews of the 2019-20 Indiana roster. Today, our player profiles continue with a look at Race Thompson.

Despite spending the past two seasons in Bloomington on scholarship, Race Thompson is in many ways still a newcomer to college basketball.

Thompson, a 6-foot-8 forward from Plymouth, Minnesota, committed to the Hoosiers in the summer of 2017 and opted to enroll in college a year early with plans to redshirt.

After sitting out the 2017-18 season to get healthy, hopes were high last season for Thompson. But after logging four minutes for the Hoosiers in an 80-35 win over Montana State on Nov. 9, Thompson didn’t appear in another game until an 84-63 loss at Minnesota on Feb. 16.

The reason for his absence? A severe concussion suffered in practice that kept him off the court for months.

“I didn’t know my concussion was that bad,” Thompson said last March. “I thought I’d be back in like two weeks, like whatever, it’s alright. But it ended up being two months, almost three months before I could even play again. So that was something that was really tough.”

Once he returned, Thompson showed flashes of being a player who could make an impact in the future for the Hoosiers.

In Indiana’s thrilling 75-73 double overtime win over Wisconsin on Feb. 26, Thompson played a career-high 22 minutes and grabbed seven rebounds. In that victory, his defense on Ethan Happ was a major reason the Hoosiers were able to best the Badgers.

“He’s got more physicality than we’re accustomed to,” Archie Miller said after that Wisconsin win. “He can bang. He can mix it up a little bit. The other thing is he’s a really good rebounder per minute. He’s rebounding the ball on both ends of the floor for us in his minutes that he’s given. He’s been able to do that.”

With a redshirt year and an injury plagued season behind him, Thompson now looks like a candidate to become a rotation regular for the Hoosiers as a sophomore.

Prior to enrolling at Indiana, Thompson showed a capable midrange game and the ability to step out on the perimeter and knock down the occasional 3-pointer. Those skills would serve him well if he’s going to play the four at times alongside true post players like De’Ron Davis and Joey Brunk.

“Coach (Miller) emphasizes that a lot,” Thompson said. “Coach tells me that it’s important for me to be able to knock down shots.”

After Hoosier Hysteria, Thompson acknowledged that he doesn’t know what his specific role will be this season, but explained he’s ready to fit in wherever he can to help the program.

Bottom Line: Thompson is a part of a crowded Indiana frontcourt rotation that also features Davis, Brunk, Trayce Jackson-Davis and Justin Smith. Realistically, he’s probably behind each of those guys in the rotation hierarchy entering the season. But if he can knock down shots, rebound at the rate he showed last season and play with physicality in the paint, it will be hard to keep him off the floor. While he may be overlooked when breaking down the roster in the preseason, it’s important to remember that Thompson was a four-star recruit for a reason and his presence should be a positive on the IU roster.

Quotable: “I learned a lot about myself (last season). I’m strong. I had to keep my mind in it. I was out for two months, so it was really just keeping my mind in it and just staying with it every single day rehabbing and going to therapy and stuff like that. It was tough.” – Thompson on what he learned about himself last season going through missing time and getting back from a concussion.