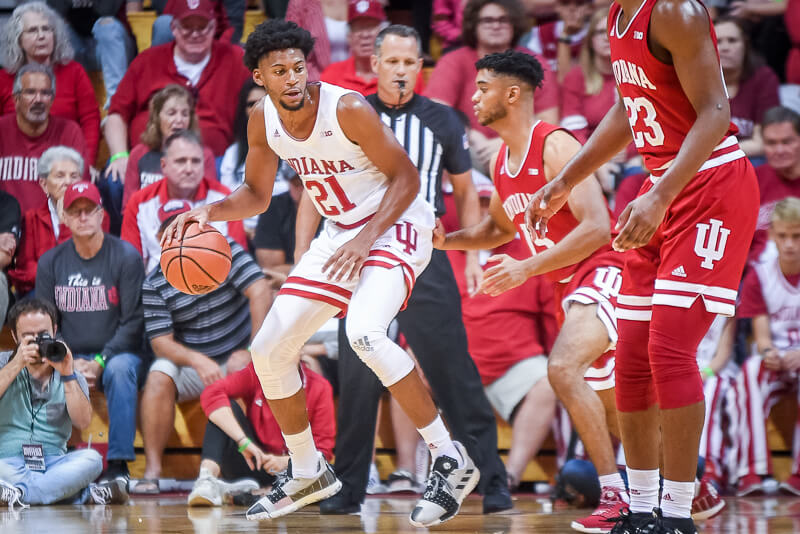 With the start of college basketball season on the horizon, we’ve transitioned from our look at other Big Ten programs to our player-by-player previews of the 2019-20 Indiana roster. Today, our player profiles continue with a look at Jerome Hunter.

The biggest storyline over the last month for Indiana basketball has been the health of Jerome Hunter.

After missing all of last season with a lower leg injury that required surgery, rumors swirled if Hunter would ever be healthy enough to play for the cream and crimson.

Hunter somewhat dismissed those rumors on Twitter in May, and Archie Miller constantly told the media over the summer Hunter was progressing well. It wasn’t until Indiana’s media day on Sept. 24 when the hope of Hunter’s return to the court came to fruition.

The program announced he was cleared for all basketball-related activities but would be still monitored by the medicine staff and managed accordingly. Hunter spoke to the media that same day, excited to be back.

“Last year really hurt, but as you keep getting through it you start thinking of other things and how you can get better off the court,” Hunter said. “That’s all I focused on, how next year I could be the best player I could be.”

Hoosier fans then saw him in action on Oct. 5 at Hoosier Hysteria, where he competed in the 3-point contest, skills competition and the five-on-five scrimmage.

So, what does Indiana get back this season from the four-star product out of Pickerington North?

In high school, Hunter finished with 1,314 career points and 729 rebounds. His senior year, he averaged 20.2 points and 10.2 rebounds per game while Pickerington North posted a record of 20-5. It earned him first team All-State honors, and he was a finalist for Ohio Mr. Basketball.

As a 6-foot-7 forward, one of Hunter’s strengths is the ability to knock down shots from the perimeter.

During last year’s offseason, Miller created a competition to push players through the stagnant month of October. He used a point system that weighed heavily on the team’s five-on-five scrimmages, and the winner would earn a gold jersey for the week. After the fourth week of practice, Hunter was awarded the gold jersey, which Miller credited to his ability to drain outside shots.

His shooting was also on display during the 3-point contest at Hoosier Hysteria, teaming up with women’s basketball’s Brenna Wise to hit a combined 18 threes in 60 seconds.

“He’s got some things that you can’t teach,” Miller said at Big Ten media day. “He can score the ball in a lot of different ways. He’s competitive. He’s got some toughness about him, he’s got an edge about him, and he’s very, very hungry to play after being sat out.”

Hunter put on six more pounds dating back to last fall, weighing in at 220 pounds now. He could either be used in a small-ball lineup and slot in at the 4 and stretch out opposing defenses, or he could play the 3 along with two guards and two bigs and serve as an athletic wing in that lineup.

During the team’s scrimmage on Saturday, Hunter was handling the ball at the perimeter and driving to the rim. He was shooting threes, and he posted up, hitting an impressive fadeaway jumper that he kissed off the glass.

“They recruited me for my versatility,” Hunter said. “I feel like I can just be anywhere on the court that he (Miller) wants me to be.”

Bottom line: With a lot of unknowns about the offense this season, Hunter has the potential to be a bright spot when it comes to scoring the ball. Obviously, guards like Devonte Green, Al Durham Jr. and Rob Phinisee, and forwards like De’Ron Davis, Joey Brunk and Trayce Jackson-Davis will be looked at to fulfill points in their respective positions. But Hunter provides the ability to do both — score in the paint, in the post and be the much-needed threat on the outside to stretch out the defense and keep opponents honest. If health isn’t an issue, Hunter can be the most important piece Indiana lacked a season ago and desperately needs this year.

Quotable: “Jerome’s a key guy to our team. It’s always hard for someone to come into college and then not be able to play their first year, especially with the things that he dealt with. So, we were all there for him, and now we’re glad that he’s back. He helps us get better, and we help him get better.” — De’Ron Davis at IU’s media day.