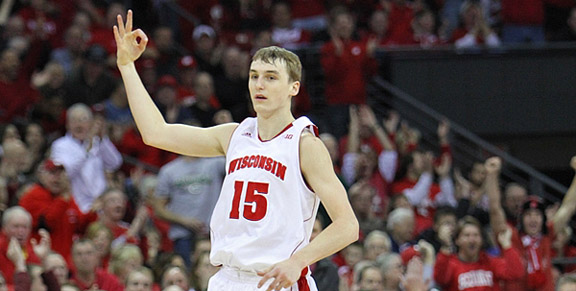 With the start of college basketball season on the horizon, we’ll be taking a long look at the conference at large as well as Indiana’s roster over the next month. Today, we continue our look at the Big Ten with the Wisconsin Badgers.

The brand of basketball in Madison may not always be easy on the eyes, but the results cannot be called into question. Over 12 seasons at Wisconsin, Bo Ryan has two Big Ten championships and the Badgers have never finished outside of the top four in the conference standings. That’s consistency.

Of course, that begs the question: Is this finally the year Wisconsin falls into the middle of the pack in the league? A quick survey of preseason prognostications says no. That optimism is centered largely around the upside of Sam Dekker, pictured above, and a solid nucleus of returning players in the backcourt.

Dekker, one of four true freshman to start under Ryan, appears poised for a huge year. Ryan Evans is no longer going to take minutes from Dekker and his elite athleticism, motor and ability to shoot from the perimeter make him one of the more exciting players to watch in the league. As a freshman, he shot nearly 40 percent on 3-pointers and posted an offensive rating of 116.7, the highest mark among regulars in Wisconsin’s rotation.

Also returning are Ben Brust and Josh Gasser, who missed last season with a torn ACL. Brust made a team-high 79 three-pointers last season, but rarely gets to the foul line. Gasser could start in the backcourt with Brust and Traevon Jackson as long as health isn’t an issue. Gasser played in Wisconsin’s trip to Canada, but will need some time to knock off the rust after missing an entire season. In his last full season, Gasser shot over 45 percent from distance, so he and Brust have the potential to form a potent perimeter combination for Ryan. George Marshall also figures to get a shot at backup minutes, assuming he can hold off freshman Bronson Koenig.

The frontcourt situation is far less certain as Evans, Mike Bruesewitz and Jared Berggren all graduated. Frank Kaminsky is the only returning player with any significant experience and he’s not a prototypical big man as nearly half of his field goal attempts came from behind the 3-point line.

Beyond Kaminsky, senior Zach Bohannon and freshmen Vitto Brown and Nigel Hayes will battle for the remainder of the minutes. Hayes, a top 150 recruit according to the 247Composite, appears ready to contribute right away. On the trip to Canada, Ryan started Kaminsky at the five and opted to go smaller at the four with Dekker.

Bottom line: Ryan’s teams consistently limit turnovers, hunt good shots and defend, which is why the Badgers are annually a good bet to finish near the top of the league. Wisconsin has exception guard depth and one of the more talented wings in the league in Dekker, so the lack of frontcourt experience is something the Badgers should be able to overcome and once again win plenty of Big Ten games.

Quotable: “I think right now all we’re focused on is getting better each day and it’s coming together. We lost a lot of guys who played a lot of minutes last year, so just getting guys acclimated is important. I think if we just keep progressing the way we’re progressing right now, as long as we keep getting better we can do some good things.” – Brust after Wisconsin’s trip to Canada.