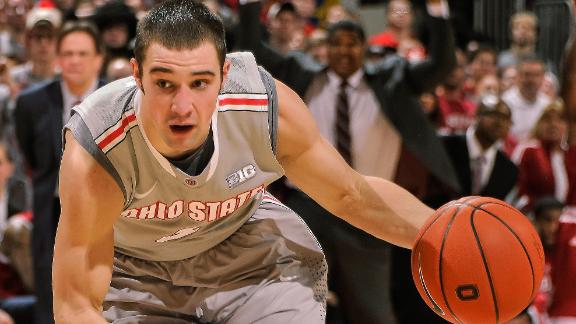 They were so close.

On March 30 in the Elite 8 of the NCAA tournament, No. 2 seed Ohio State had come back on No. 9 seed Wichita State in the West Regional final. Down 13 points at halftime, the pre-game favorites had cut the deficit to three with 2:49 to go in the game. 27 seconds later, Wichita State’s Tekele Cotton would drain a 3-pointer to make the score 65-59. The Buckeyes would never get that close again, that day.

Ohio State’s NCAA tournament run ended in heartbreak at Staples Center, but coming into 2013-2014, there’s plenty of reason for optimism that a return trip deep into March could happen.

Yes, the Buckeyes lost their leading scorer and rebounder, Deshaun Thomas, to the professional ranks. But with the pieces head coach Thad Matta has returning and the young talent he has brought in, it’s already been enough for his crew to earn multiple top 15 preseason rankings.

In fact, the Buckeyes return seven of their nine top scorers from last season, including full-time starters Lenzelle Smith Jr., Craft and Sam Thompson and full-time rotation members in LaQuinton Ross, Scott and Amir Williams. Thompson led the team in 3-point shooting percentage last season (40.4), Craft led the team in assists (4.6) and steals (2.1) per game and Williams led the team in field goal percentage (55.6) and blocks (50). In other words, the Buckeyes will have no problem with finding on-court production.

Looking at Ohio State’s roster, Matta’s team actually has only three underclassmen. Sophomore Amedeo Della Valle played in 15 games last year for 108 total minutes, and freshmen Marc Loving, a 6-foot-7 forward, and Kam Williams, a 6-foot-2 guard, were top 100 prospects in the 2013 high school class, according to the 247 Composite.

Though in some cases, losing a leading point-scorer would hurt a team, that should not be the case with Ohio State this year. With a favorable non-conference schedule and Big Ten slate that avoids multiple matchups against Indiana, Michigan and Wisconsin, the Buckeyes just have too many key, returning pieces to collapse.

Bottom line: This season’s outlook is bright in Columbus. As they attempt to shake off a heartbreaking exit in the 2013 NCAA tournament, Ohio State will have the pieces necessary to make a repeat run in 2014. Craft, who has led this Buckeye team for the past three seasons, returns for his senior year. Much of Ohio State’s contributing cast from last season is back with another year of experience under their belt. Yes, the Buckeyes will need players to step up offensively — Thomas led the team last season in points per game by a 9.8-point margin — but otherwise, the chemistry, talent and experience puts them in an immediate position for on-court success.

Quotable: “The makeup of our team this year gives us another opportunity to be successful in the Big Ten and nationally. Once again our league is extraordinarily talented across the board. We are fortunate to have a veteran group this year who have been through the rigors of the conference season and have been successful in postseason play.” — Matta on Ohio State’s prospects in 2013-2014.