After completing official visits to all four of his finalists and taking a couple of weeks to mull over his options, class of 2014 Christchurch (Va.) announced on Wednesday that he’s headed to the SEC. In a press conference in ... 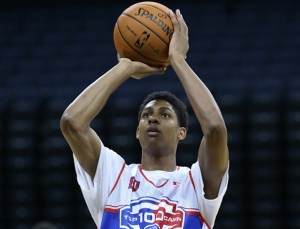 On Wednesday afternoon, Florida, Indiana, Notre Dame and Oklahoma State will learn where class of 2014 wing Devin Robinson will play in college. Johnson, a senior at the Christchurch School in Christchurch, Va., will announce his intentions at 3:30 p.m. ...

One of Indiana's top recruiting targets in the class of 2014 will soon make an announcement on where he'll play next season. According to Evan Daniels of Scout.com, Christchurch (Va.) forward Devin Robinson will announce his decision on Wednesday, Oct. 30 at 3:30 p.m. Robinson's AAU coach, Tony Squire, confirmed the announcement plans in a text message to Inside the Hall. Robinson, the No. 21 recruit nationally in the 247Composite, is considering four schools: Florida, Indiana, Notre Dame and Oklahoma State. Each of his his finalists received an official visit.

The Indiana coaching staff was on the road Tuesday, making stops at Huntington Prep in West Virginia and at Wilbraham and Monson Academy in Massachusetts. At Huntington Prep, the staff stopped in to see 2014 guard JaQuan Lyle, the former Evansville Bosse guard who will finish his high school career against an aggressive national schedule. Huntington Prep is also home to other top prospects like Miles Bridges (2016), Thomas Bryant (2015) and Montaque Gill-Caesar (2015). Lyle, the No. 22 prospect nationally in the 247Composite, told Inside the Hall recently that Indiana is a school he's considering in the aftermath of his decision to de-commit from Louisville. He's taken unofficial visits to Connecticut and Memphis this fall, but won't be able to take any official visits until taking the SAT next month. On his Twitter account, Lyle posted the following late Tuesday afternoon: "Shoutout to Coach Crean for coming in after school today."

Class of 2014 Christchurch (Va.) forward Devin Robinson is down to four schools. The 6-foot-8, 170 pound wing canceled his official visit to Connecticut that was to take place the weekend of Oct. 19. The Hartford Courant was the first to report the news. Robinson has already taken official visits to Oklahoma State, Notre Dame and Indiana and will take his final official visit this weekend to Florida.

Several class of 2014 prospects being recruited by Indiana will be making official visits this weekend and our latest recruiting notebook takes a look at those campus trips as well as other notes from the first week of the fall recruiting period: · Goodluck Okonoboh, one of IU's top targets in the 2014 class, will make his first official visit this weekend and Bloomington is the destination. The Hoosiers have long been considered one of the favorites to land Okonoboh and getting him on campus is the next logical step in making that happen. It's been well documented, but the relationship between Okonoboh and current IU freshman Noah Vonleh is a very good one and this weekend provides Okonoboh the opportunity for his first up close look at the Indiana campus. · Lourawls Nairn hosted Tom Crean for an in-home visit earlier in the weekend, but the major development for Nairn this week was the addition of Michigan State to his list of three finalists. Nairn had been considering a final three of Indiana, Minnesota and Oklahoma, but the Spartans are making a late push with Tyler Ulis seemingly headed to Kentucky. Nairn will be in East Lansing this weekend and then Indiana will host him for an official visit next weekend.

Devin Robinson’s rise from fringe top 100 to a five-star prospect nationally was one of the top recruiting stories of the spring and summer. Now, the Christchurch School (Va.) senior forward is ready to begin the next step of his ...

A look inside the rise of Devin Robinson

As a 25-year veteran of the grassroots basketball scene, Tony Squire has dedicated more than two decades of his life to helping young people achieve their goals both on and off the court. He’s coached future NBA Hall of Famers ...

Christchurch (Va.) forward Devin Robinson is the latest class of 2014 prospect to receive an Indiana offer and was one of the top players at last month’s NBPA Top 100 Camp in Charlottesville, Virginia. The 6-foot-8 forward, once an unranked ...

CHARLOTTESVILLE, Va. — Class of 2014 Christchurch, Va. forward Devin Robinson is one of the fastest rising players in the country and Indiana has taken an interest in his recruitment. Robinson, who has grown three inches over the last year ...