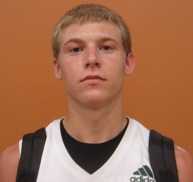 : 190
: 2011
: Guard-Forward
: Hamilton Heights (IN)
: Indiana Elite Team Indiana
: August 3, 2009
: November 10, 2010
: The first thing that stands out about Austin Etherington is his ability to shoot the basketball. He’s at his best as a shooter when he can come off a screen or double team and catch and shoot. At first glance Etherington may not look like an explosive athlete, but if he gets a full head of steam he can finish above the rim with ease. He plays sound defense and isn’t afraid to put his body into his man. The biggest areas of improvement for Etherington are ball handling and lateral quickness. He’s a little undervalued by most people and has a chance to be a great contributor and glue guy at the college level. – Joe Eberhardt, Indy HS Hoops