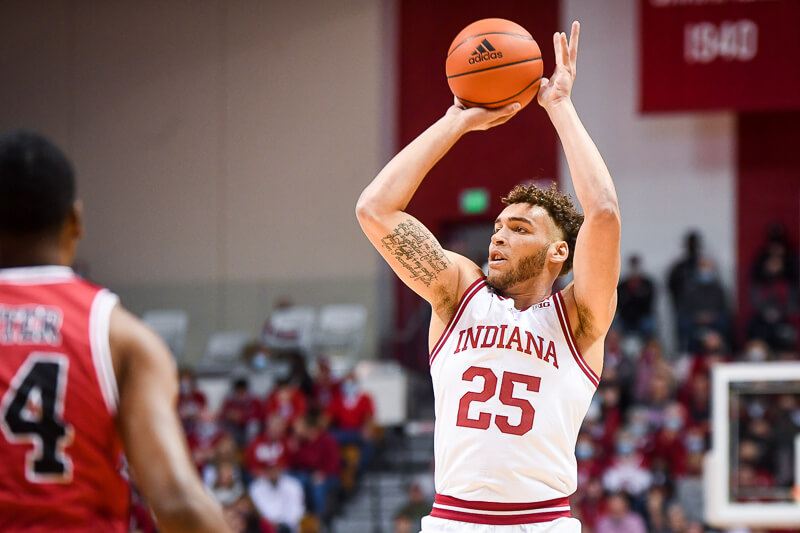 IU had its first challenging game of the season against the St. John’s Red Storm on Wednesday night and the contest turned into a thriller with the Hoosiers coming out on top. Off the court, IU got a big commitment from a 2023 recruit. We will also preview the Hoosier’s upcoming opponent in Louisiana and tip times were announced for a couple of upcoming games.

Unfortunately, a key contributor off the bench is on the shelf for a while after an injury. We will conclude our 6-Banner with a look at how other IU sports are doing.

• IU beats St. John’s in first big test of the season
• Gabe Cupps commits to Indiana
• A look ahead to Louisiana and tip times for Marshall and Nebraska
• Galloway out after wrist surgery
• Podcast on the Brink and AC Radio
• Hoosier Roundup

After beating two Mid-American Conference teams, IU had its first true challenge of the season as part of the Big Ten vs. Big East Gavitt Tipoff games when St. John’s came to Assembly Hall. The Red Storm features one of the top players in the nation in Julian Champagnie and the game was a thriller with the Hoosiers building a big lead and then responding to every St. John’s run in the second half for a 76-74 victory.

Some additional notes came from the contest as IU’s victory was the most-watched telecast of the Gavitt Games. Also, Trayce Jackson Davis scored his 1,000th career point and was named Big Ten Player of the Week.

IU got big news of the court this week when 2023 prospect Gabe Cupps committed to the Hoosiers. Inside The Hall’s Alex Bozich did a Q & A with Cupps after his announcement.

Cupps is from Centerville Ohio and a four-star recruit ranked number 88 in his class according to 247Sports’ rankings. He is also the number 16 point guard for 2023. He joins Jakai Newton in this class for IU which is top-ranked in the nation at the moment per 247Sports.

Tonight at 7:30 pm on Big Ten Network the Hoosiers will take on the Sun Belt Conference’s Louisiana Ragin’ Cajuns, who are ranked number 160 according to KenPom.  Bozich wrote about what can be expected from the opponent.

In other future game news, both the tipoff time for this coming Saturday’s game against Marshall and the following Saturday’s against Nebraska are now known. The contest against the Thundering Herd will be at 7 pm while the matchup against the Cornhuskers will be at noon or 3 pm. Both games will be televised on the Big Ten Network.

Banner #4 – Galloway out after wrist surgery

IU role player Trey Galloway who has had a solid start to the season will be on the shelf for an extended period after breaking his wrist in the first half of the St. John’s game. Red Storm guard Montez Mathis committed a flagrant two-foul when Galloway went up for a layup and he landed awkwardly.

The estimated time to be missed for the sophomore guard is anywhere from four to six weeks.

In this week’s Podcast on the Brink Bozich and Corazza discuss the big victory over St. Johns.

Assembly Call had a very busy week with shows as they had both a postgame following the victory over the Red Storm as well as their weekly radio show. The latest episodes of the Tamar Bates and Grace Berger series were also recorded this week.

Football continues to nosedive towards a winless Big Ten season. However, Women’s Basketball had a great week and is now a top 5 team, while Men’s Soccer begins NCAA Tournament play.

• Women’s Basketball is now the number four team in the nation and a perfect 4-0. They defeated a highly ranked Kentucky team as well as Norfolk State and Quinnipiac this week. As a result of her play in these games, star center Mackenzie Holmes was named Big Ten Player of the Week. Also, the Hoosiers added one additional player to the 2023 recruiting class.

• Men’s Soccer will take on Bowling Green today in Bloomington at noon as the number 15 seed in the NCAA Tournament. They fell to Penn State in the Big Ten Tournament Championship last Sunday.

• Football continued to have no answers offensively as they lost to Minnesota. They take on Purdue in the season finale next weekend in the Bucket Game.

• Swimming and Diving have the men’s side currently leading a seven-team field at the Ohio State Invitational.

• Volleyball lost to Nebraska and Illinois this week.

• Cross Country’s Arjun Jha competed as an individual at the national championships.

• Wrestling competed at the Mountaineer Invite. They also announced their recruiting class for next year.

• Track and Field released their schedule for the upcoming season.