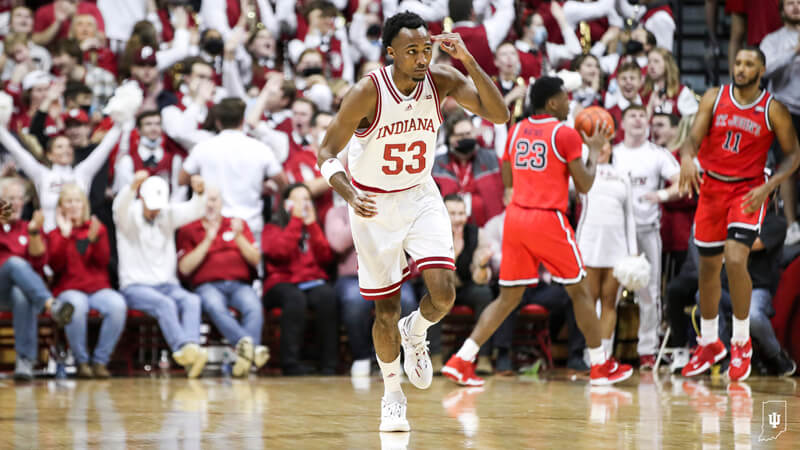 How it happened: It looked like Indiana might run St. John’s right off Branch McCracken Court on Wednesday night. The Hoosiers started strong defensively and built a double-figure lead by the 6:45 mark of the first half. As the Red Storm misses continued, however, Indiana’s offense stagnated and the Hoosiers missed an opportunity to build a bigger lead before intermission. After IU claimed its biggest lead of the half at 14, the Hoosiers settled for a 12-point cushion at the half. St. John’s managed just .79 points per possession in the first half on 33.3 percent shooting from the field.

But the Red Storm had an answer. As the Hoosiers failed to clean up the defensive glass, St. John’s seized the opportunity to second chance points. By the 8:49 mark, St. John’s tied the game at 56, but the Hoosiers got a quick five-point burst on a 3-pointer by Jordan Geronimo and a layup from Khristian Lander. The Red Storm tied it again at 65 on a 3-pointer by Julian Champagnie, but Indiana again answered with buckets from Trayce Jackson-Davis and Race Thompson to claim a 69-65 lead at the under four media timeout.

Standout performers: Jackson-Davis was once again Indiana’s best player, finishing with 18 points, 10 rebounds, four assists and two blocked shots in 37 minutes. But Jordan Geromino, who finished with seven points, was also important as was Miller Kopp, who had 12 points. Thompson’s 15 points were second on the team and he also grabbed five rebounds. Tamar Bates also had a big first half as the freshman scored all 11 of his points before intermission.