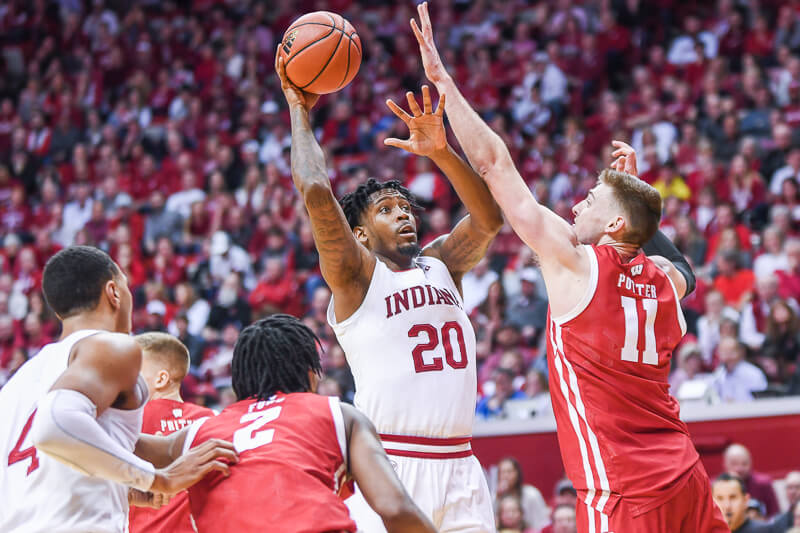 Through all the criticism Devonte Green and De’Ron Davis have received over their four year careers at Indiana, they were met with appreciation on Saturday afternoon in Simon Skjodt Assembly Hall.

They were met with standing ovations, both before the game when they were announced for the starting lineup and even afterward when an Indiana loss potentially pushed the narrative about the two seniors — no leadership, not bought in, just wait until Archie Miller gets “his guys.”

But that wasn’t the reason Indiana lost by four to Wisconsin. It’s just an easy fallback plan when scrambling for blame.

The Hoosiers hit just one field goal in the final 10:04 of the game, missing 13 of their final 14 shots. The game was shades of Arkansas in late December and Maryland at home, but not to Miller. Because this time there was no lack of effort or toughness, and it has been like that — win or lose — since the middle of February.

After losing to Wichita State last season in the quarterfinals of the NIT, both Green and Davis knew what was on the line in their final year. If the Hoosiers fail to make the NCAA tournament this year, Green and Davis would be the first class of four-year seniors since 1972 to never make the tournament.

“I definitely don’t want to be one of the only classes to not make the tournament in four years,” Davis said in March last year. “That just starts with us. I’m gonna stress that all year.”

The year started out good for Indiana, winning its first eight games. The Hoosiers easily handled their first seven non-conference opponents, then Devonte Green exploded for 30 points to knock off Florida State, who are currently ranked seventh in the country and just won the ACC regular season championship.

Then Indiana got blown out on the road at Wisconsin in early December, and Miller called out his team for lacking leadership and communication. The next three games — UConn, Nebraska and Notre Dame — were all victories, and Miller praised Davis for stepping up in the locker room.

But the aforementioned Arkansas loss came after that, followed by a rough start to conference play. Indiana picked up a much-needed home win over Ohio State in early January, a game in which Green and Davis came up huge.

The ebbs and flows of the season continued — big home victories, horrible road losses — but ever since Feb. 16, Indiana has found its footing, even in the losses.

The maturity of this team over the season has coincided with the maturity of Green and Davis and the seniors rewarded Miller inserting them into the starting lineup by scoring Indiana’s first 17 points.

But as exciting as the start was, it was perfect example of their careers at Indiana. Davis’ nine minutes in the first half was met with only four in the second. It was mainly because Indiana elected to play smaller in the second half, but also because of Davis’ past injuries, which have ruined his ability to move as swiftly as he once could and decreasing the minutes he’s able to play.

Green’s 16 first-half points were followed by zero in the second half, representing the hot-and-cold inconsistent play Green has dealt with all four years. The second half struggles against Wisconsin were also due in part to rolling his left ankle in the first half, making him visibly hobbled in the final 20 minutes as all seven shot attempts fell short.

But even with the loss, Indiana sits at 19-12 overall and 9-11 in the Big Ten, with a resume strong enough to reach the NCAA tournament.

When Miller came to Indiana in 2017, Green and Davis were in Bloomington the first day Miller walked on campus.

“They didn’t know me, and I didn’t know them,” Miller said during the Senior Day festivities. “At the end of the day, for them to be standing here right now as we continue to evolve as a program and we look back on it, number one, these two guys have given us stability. They were able to hang in there through a tough time through transition. It’s easy to run away. They didn’t.”

In the video package that played on the big screen before the senior speeches, Green’s advice to the underclassmen was to just stick with it even through the tough times.

Their speeches gave thanks to their family, friends and the fans, which was reciprocated back to them with rounds of applause.

Miller’s speech about them being part of the foundation to help build this program up mirrored similar sentiments he gave to players like Robert Johnson and Juwan Morgan in years past.

But this one was different. Because for the first time in Miller’s tenure as head coach, Indiana is on the verge of dancing in March.

Green and Davis set out a goal at the beginning of the season, and as the last players standing from the Crean era, they are close to reaching a huge step in the Miller era.

“I think this group has a chance to make a few runs in it, and that starts in Indianapolis next week,” Miller said. “In Indianapolis we’ll be ready to go, and then when they call our name on Selection Sunday, we’re going to find a way to advance in that one, too.”