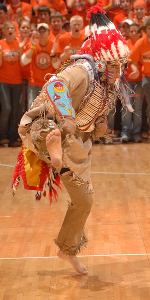 The Hoosiers are finished with their cupcakes and the New Year is nearly upon us, which can mean only one thing: It’s Big Ten Preview Time! Here’s a look at the teams that will challenge the Hoosiers for the conference crown … or fall under the weighty boot of crimson dominance. Probably the latter. Today: Illinois.

If anything can be said about the Illinois Illini — besides the weird obsession among its fans about a vaguely racist Indian minstrel mascot — it’s that these dudes defend. It’s the one immutable rule of Bruce Weber’s tenure: No matter how much talent Weber puts on the floor, his team will be one of the best in the Big Ten, and perhaps the country, at stopping opposing offenses. Unfortunately for chanters of I-L-L everywhere, the past two years, there is another immutable rule about the Illini: They are horrid offensively.

So far, their defensive acumen has not shown up as often as their offensive horribleishness. That equals bad basketball. The latest example: a 60-58 loss against the fighting Tennessee State Tigers, a 3-7 (now 4-7!) team that has no business beating the Illini in Champaign. Yet they did, as have the Miami (OH) Redhawks. The idea that those two teams would win in road-impossible Champaign is sort of unbelievable, and it doesn’t toll well for the Illini as the Big Ten schedule picks up.

A look down the lineup reveals one good player (Shaun Pruitt), one underachieving athletic freak (Brian Randle), and a series of mediocre-to-bad guardish players. Most interesting is Randle. Whether through injuries or fouls or his seemingly unadaptable and stubborn offensive game, Randle has never been able to turn all that athletic talent into the promise it held throughout his high school career and recruitment. Watching him play, one gets the feeling that, with just a few tweaks and a better outside shot, he could be so good. Instead, Randle is the second-best player on a team without a single good player.

The Bottom Line: The Illini will defend well. Bruce Weber will be slightly annoying in press conferences. And thanks to their unbelievably bad offense, the Illini will not only be painful to watch, they will be a bad basketball team. The big story from our angle is their newfound rivalry with IU, but if early season returns are any indication, this year, it won’t be much of a rivalry at all.

* For the record, I hate Illinois with a passion that burns deeply inside my most insulated loins. But I was pretty nice, wasn’t I?