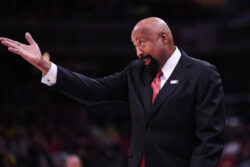 Two storied college basketball programs that sit just over 100 miles apart may be on the verge of a non-conference series. Speaking prior to an IU varsity club event on Wednesday at Huber’s Winery, Mike Woodson said that he’s in ...

In Indiana’s narrow victory over the Cardinals on Saturday afternoon, the Hoosiers were propelled to victory thanks to some late buckets from the likes of Romeo Langford, Robert Phinisee and Juwan Morgan. But the Hoosiers’ defense also came up with ... 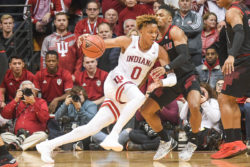 Indiana improved to 8-2 on Saturday afternoon with a 68-67 win over Louisville at Simon Skjodt Assembly Hall. It was the third straight win by two or fewer points for the Hoosiers. Here’s a look at five takeaways from the ...

Notebook: Smith a key in IU’s win over Louisville 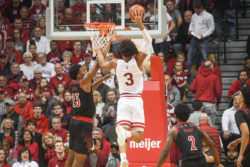 With his recent performance and his role in question, Justin Smith responded with a bounce-back game in IU’s 68-67 win over Louisville. The sophomore seemingly gained confidence as the game progressed, and he finished with nine points and nine rebounds. ... 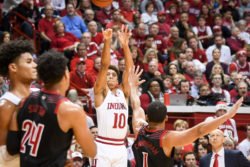 Thoughts on a 68-67 win against the Cardinals: The Cardinals showed no fear. Where others have entered Simon Skjodt Assembly Hall with trepidation, the intimidating environment holding them hostage, Louisville played free. Indiana had good looks early, but missed them. ... 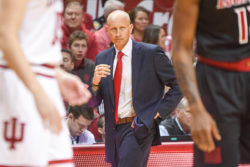 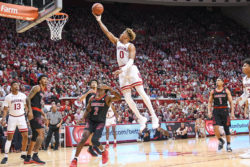 At the buzzer: Indiana 68, Louisville 67 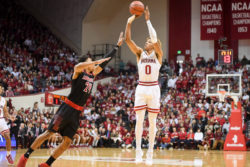 Quick thoughts on a 68-67 win over Louisville: How it happened: Things looked bleak early on for Indiana. The Cardinals opened up an eight-point lead in the first half and went into halftime leading by five based on a strong ...

IU set to host Louisville for Saturday matinee in Bloomington

Having crossed two Big Ten games off of its schedule, Indiana’s upcoming slate of opponents doesn’t get any easier as it winds down the calendar year. Saturday afternoon, Louisville – riding a three-game win streak – will enter Simon Skjodt ... 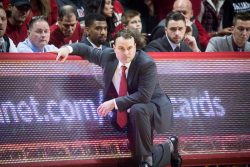 Archie Miller, Al Durham and Juwan Morgan met with the media on Friday to preview Indiana’s matchup on Saturday afternoon against Louisville at Simon Skjodt Assembly Hall. Watch both press conferences below:

Following a 64-62 win at Penn State, Indiana returns to Simon Skjodt Assembly Hall on Saturday afternoon to host Louisville. The Cardinals are 6-2, but have won three straight. The game will be broadcast at 2:30 p.m. ET on FOX ...