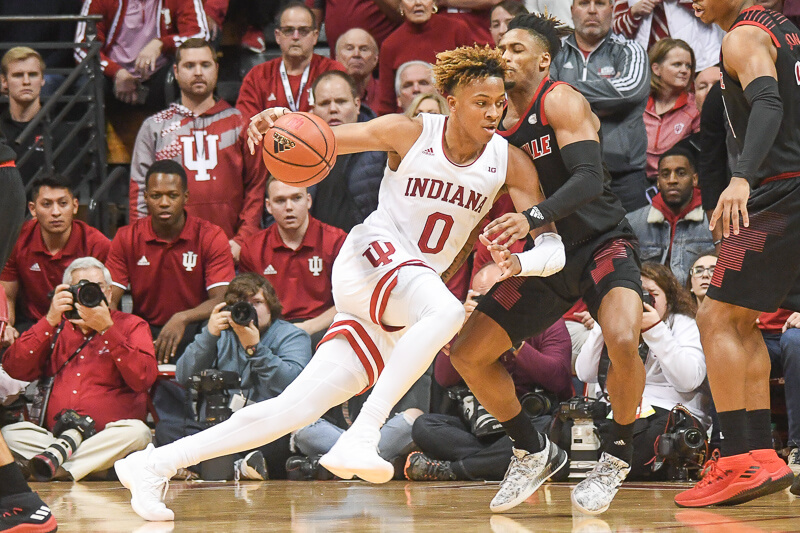 Indiana improved to 8-2 on Saturday afternoon with a 68-67 win over Louisville at Simon Skjodt Assembly Hall. It was the third straight win by two or fewer points for the Hoosiers.

Here’s a look at five takeaways from the win over the Cardinals:

• Defense propels IU to its third straight win: The Hoosiers are still very much a work in progress offensively, but Indiana is finding ways to win close games with its defense.

Saturday’s performance against Louisville was no different as Indiana limited the Cardinals to just one point per possession. From an efficiency standpoint, Saturday marked the worst offensive output for Louisville so far this season according to Ken Pomeroy’s numbers.

How did Indiana do it?

The Hoosiers kept Louisville off of the foul line and out of the paint. Over half of Louisville’s field goal attempts were 3-pointers and the Cardinals shot just 38.3 percent overall from the field.

Through 10 games, Langford has already established himself as one of the Big Ten’s best scorers. Saturday was another big day for the Indiana Mr. Basketball as he dropped 21 points on 6-for-11 shooting from the field and 9-for-14 shooting from the free throw line. Langford drew 10 fouls in the game.

Phinisee, meanwhile, was once again clutch down the stretch as he hit a pair of 3-pointers in the game’s final 10 minutes to finish with 10 points and six rebounds in 33 minutes.

How good were Langford and Phinisee? Good enough that Juwan Morgan no longer considers them freshmen.

“They’re becoming more like veterans,” Morgan said postgame. “We can’t call them freshmen any more because the plays they’re making down the stretch are big plays for us. They still have mistakes here or there, but they always make up for them.”

• Smith delivers strong performance on both ends: Sophomore forward Justin Smith has been inconsistent through the first month of the season, but it appears he is finally beginning to figure things out.

Most importantly, Indiana put Smith in good positions to make plays offensively. Rather than letting him regularly handle the ball on the wing and try to make plays, Smith was used more in this game as a cutter to the rim. And the approach was successful as IU’s big men found him multiple times for easy scores.

Credit Smith for playing a mistake free game offensively (zero turnovers) and also for delivering this rim rattling dunk that sent Simon Skjodt Assembly Hall into a frenzy in the second half:

UP, UP AND AWAY. @IndianaMBB's Justin Smith with the slam. ? pic.twitter.com/scmpR4LsS9

• Turnovers improve for an afternoon: As Ryan pointed out on Twitter, Indiana’s turnover percentage in the win was a season low (14.9).

The overall turnover numbers, however, are still a problem this team needs to correct. Indiana’s turnover percentage through 10 games is 20.7, which ranks just 257th nationally.

Given how well Indiana is shooting on 2s (58.2 percent) and its respectable 3-point shooting percentage (35.9), improving the turnovers is the key to unlocking a more efficient offense.

• Davis and Morgan outplay Louisville’s frontcourt: In Indiana’s previous two meetings with Louisville, the Hoosiers struggled with the length on the frontline of the Cardinals.

Saturday was a different story as De’Ron Davis (eight points, 3-for-4) and Juwan Morgan (15 points, 6-for-9) had no problem with Steven Enoch and Malik Williams.

The Hoosiers finished the game shooting 57.1 percent on 2s while Louisville managed just 42.9 percent inside the 3-point line.

Indiana isn’t a dominant shot blocking team, but the Hoosiers once again made it difficult for a high major opponent to shoot better than 50 percent on 2s. This was the third straight game that Indiana held its opponent to 50 percent or lower shooting inside the 3-point arc.