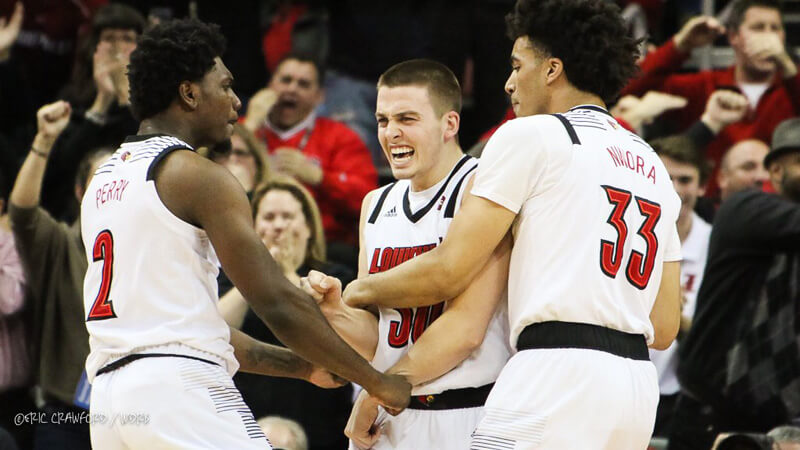 Following a 64-62 win at Penn State, Indiana returns to Simon Skjodt Assembly Hall on Saturday afternoon to host Louisville. The Cardinals are 6-2, but have won three straight.

The game will be broadcast at 2:30 p.m. ET on FOX with Joe Davis, Steve Lavin and Lisa Byington on the call:

Saturday marks the final contest in a 3-game series between Louisville and Indiana that previously included games at Bankers Life Fieldhouse and the KFC Yum! Center.

The Cardinals won the first two meetings convincingly and this may be the last time these two programs lock horns for the foreseeable future. The expansion of the Big Ten schedule and talk of a future series with Arizona makes it unlikely that Indiana will be interested in continuing the series beyond Saturday.

Louisville basketball has been on a roller coaster ride for the last five-plus years. From a now-vacated 2013 national championship to multiple NCAA scandals that put the program on probation, the Cardinals are on their third coach in three seasons. And with more fallout expected from the FBI college basketball trial, there are likely more twists and turns to come.

Louisville isn’t as talented as it was last season, but the Cardinals are a much better team thus far as they replaced a placeholder on the sidelines in David Padgett with a successful coach in Chris Mack.

The Cardinals played Tennessee tough for about 37 minutes in Brooklyn before the Vols pulled away late and then narrowly lost to Marquette two days later. Since then, Louisville has a home court win over Michigan State in the Big Ten-ACC Challenge and a road win at Seton Hall.

Through eight games, Louisville has just one player averaging in double figures in sophomore wing Jordan Nwora. The 6-foot-7 native of Buffalo has a solid shooting stroke, but is streaky from the perimeter.

He’s shooting 34.1 percent on 3s, but has been very good when he can get his feet set and spot up. According to Synergy Sports, Nwora is scoring 1.11 points per possession in spot-up situations. Nwora has also been very good inside the 3-point arc as he’s shooting 62.2 percent on 2s on 45 attempts. He committed eight turnovers in Louisville’s loss to Tennessee and had four turnovers against Michigan State, but has cleaned things up recently (just three turnovers over his last two games).

Perry is a talented playmaker who is off to a terrific start in his second collegiate season. He’s shooting 88 percent from the free throw line, 78.9 percent on 2s and 44.4 percent on 3s.

Cunningham, who grad transferred from Samford, has a team-high 25 assists, but is shooting just 27.8 percent on 3s. He’s one of seven players on the roster averaging between 6.4 and nine points per game.

Sutton is an undersized forward who can step out and make perimeter shots (42.3 percent on 3s) and is averaging just above 10 points over Louisville’s last three games.

King is coming off a season-high 17 points against Central Arkansas, but is shooting just 17.3 percent on 3s and has really struggled against top tier competition. In Louisville’s four games against high major competition, King is 5-of-16 on 2s and 1-of-9 on 3s.

McMahon, a junior, is a good shooter who has taken 36 of his 44 field goal attempts from distance. For his career, he’s shooting 39.3 percent on 3s. Fore is shooting 38.5 percent from the field and averages 3.8 points in 18.5 minutes per game.

Fort Wayne native and sophomore Malik Williams and journeyman Akoy Agau back up Enoch. A former top 40 recruit, the 6-foot-11 Williams has taken more 3s than 2s in his career. He’s shooting 28.6 percent on 3s this season, but really hurt Indiana from distance in last season’s game at the KFC Yum! Center.

Agau, who is 24 years old, began his career at Louisville before transferring to Georgetown, SMU and then back to Louisville. He’s averaging 5.2 points and 4.3 rebounds in just 10.8 minutes per game.

Pomeroy likes Indiana by 6 with a 72 percent chance for a win. The Sagarin ratings, adjusted for home court, favor Indiana by 4.5.

While the Hoosiers had a good crowd for the Marquette game, Saturday’s turnout should be the best of the season to date. This ticket has been one of the highest priced on the secondary market and this is Louisville’s first trip to Bloomington since 2002.

With three days to prepare and to get healthy, Indiana should be able to get more from Juwan Morgan as he was banged up in State College. The Hoosiers are also still trying to reintegrate Zach McRoberts and Devonte Green into the rotation. This will be the fourth game back for both players.

For Indiana, the primary key is keeping Louisville from getting into rhythm from the perimeter and also limiting the trips to the free throw line. Archie Miller has been emphasizing playing inside-out all season, so look for the Hoosiers to emphasize Morgan early in the post with the hope of freeing up Romeo Langford and IU’s other perimeter weapons.

Louisville passed its first road test of the season last weekend, but there are few venues in college basketball that produce the atmosphere of Assembly Hall. Mack is probably looking at this game as an opportunity to see how his team will respond in a hostile environment. Overall, this should be a fun ending to a three-game series that will be a feather in the cap on the March resume of the team that emerges victorious.