In its win against Jacksonville on Saturday evening, Indiana had one of its better offensive outputs of the season thanks to an unselfishness and an ability to find the open man. The standout in the passing department was Juwan Morgan. ... 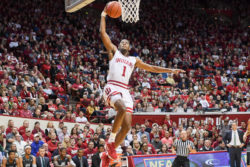 Indiana won its sixth straight game on Saturday evening as the Hoosiers cruised past Jacksonville, 94-64. It was the last non-conference game for Indiana and its final contest before Big Ten play resumes on Jan. 3 against Illinois. Here’s a ... 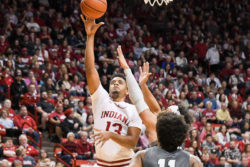 Thoughts on a 94-64 win against the Dolphins: In this season of giving, the Hoosiers were handing each other gifts all game tonight. Save for some outlier possessions, this was a balanced offensive attack, no one trying to do too ...

Archie Miller met with the media following Indiana’s 94-64 win over Jacksonville on Saturday at Simon Skjodt Assembly Hall. Watch his postgame comments below: 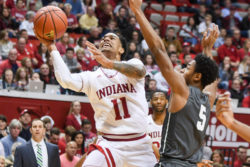 At the buzzer: Indiana 94, Jacksonville 64 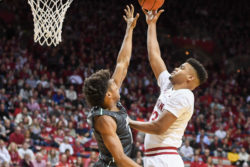 Quick thoughts on a 94-64 win over Jacksonville: How it happened: It was another slow start on Branch McCracken Court, but it didn’t take the Hoosiers long to find their footing. In its final non-conference contest of the season, Indiana ...

What to expect: Jacksonville

Indiana will conclude the non-conference portion of its schedule on Saturday night by hosting Jacksonville at Simon Skjodt Assembly Hall. The Dolphins are 7-6 and are coming off a 100-74 loss at Notre Dame on Thursday. The game will be ...

Jacksonville was hot from beyond the arc in the first half (5-of-9) in their loss to Indiana on Friday night, and it’s a theme that continued until the final buzzer (10-of-17, 58.8 percent). The Dolphins did hit a few of ... 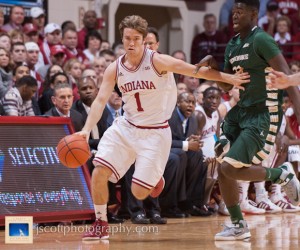 Check out 15 photos by Jamie Owens from Indiana’s 93-59 win over Jacksonville at Assembly Hall in the embedded photo gallery after the jump. Purchase prints from J. Scott Sports.

Thoughts on a 93-59 win against the Dolphins: I. Though Indiana eventually won this game by 34 points (Jacksonville actually covered the 36-point spread thanks to a late 3-pointer), it was a slow burn to get up to that mark. The ...