What to expect: Jacksonville 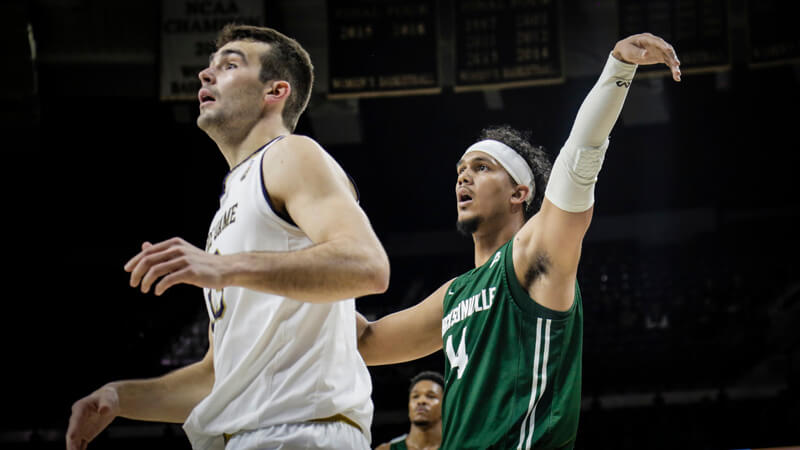 Indiana will conclude the non-conference portion of its schedule on Saturday night by hosting Jacksonville at Simon Skjodt Assembly Hall. The Dolphins are 7-6 and are coming off a 100-74 loss at Notre Dame on Thursday.

The game will be broadcast at 6 p.m. ET on Saturday on BTN with Sean Monaco and Jess Settles on the call:

Indiana’s final tuneup before Big Ten play resumes in the new year doesn’t figure to be much of a challenge.

Jacksonville, a member of the Atlantic Sun conference, hasn’t beaten a team ranked higher than No. 214 in KenPom’s ratings this season. The Dolphins also have three losses against teams ranked 305th or worse in Pomeroy’s ratings.

As was the case in Wednesday’s win over Central Arkansas, Saturday could mark an opportunity for the Hoosiers to get younger players like Damezi Anderson, Jake Forrester and Clifton Moore some minutes in advance of a 12-day break before Illinois comes to Bloomington.

Jacksonville coach Tony Jasick, a native of Whitehall, Michigan, was an assistant coach at IPFW (now Purdue Fort Wayne) under Dane Fife before taking over that program for three seasons (2011-2014). After a 25-win performance in 2013-14, Jasick was hired at Jacksonville.

Now in his fifth season at Jacksonville, Jasick has struggled to make the Dolphins anything more than a middling program in the Atlantic Sun. Jacksonville hasn’t finished a season ranked higher than 271 in KenPom under Jasick and hasn’t won more than 17 games in his tenure. Meanwhile, Purdue Fort Wayne has put together some solid seasons under Jon Coffman and has beaten Indiana twice in the last three seasons.

Notae is a high usage, low efficiency option who comes off the bench and is shooting 45.3 percent on 2s and 30.4 percent on 3s. His offensive rating (90.3) is among the lowest of the regulars on the roster.

Freshman Tyreese Davis has good size on the wing at 6-foot-6 and is averaging 9.2 points and 4.2 rebounds in 23.8 minutes per game. Sophomore Jalyn Hinton is finishing 56.9 percent of his 2s against Division I competition and is the team’s fourth leading scorer at 8.8 points per game.

Dave Bell, a 6-foot-9 junior, was strong off the bench in the loss at Notre Dame with 10 points in 22 minutes. Bell played his first two seasons at Ohio State before sitting out last season due to NCAA transfer rules. He was a top 200 recruit coming out of high school, according to 247Sports.

Non-conference teams that have come into Assembly Hall and had success against Indiana under Archie Miller have been able to make 3-pointers. It happened last year with Fort Wayne and Indiana State. Earlier this season, Louisville went toe-to-toe with the Hoosiers in large part due to strong shooting from the perimeter.

Jacksonville doesn’t look capable of putting up much of a fight because it is one of the nation’s worst perimeter shooting teams. The Dolphins rank just 343rd nationally in 3-point shooting percentage (25.8). Only 20.8 percent of Jacksonville’s points are being generated on 3s, which also ranks 343rd in the country.

Fans looking for an expedient game on Saturday night might get their wish as both programs currently rank in the top 41 in the country in terms of keeping their opponents off of the foul line.

Indiana is a 25-point favorite according to KenPom and the Sagarin ratings like the Hoosiers to win by 27.

The status of Rob Phinisee might be the most intriguing storyline heading into the game after the freshman logged just seven minutes against Central Arkansas after suffering a head injury.

Update: Phinisee will not be available on Saturday:

Archie Miller says that Rob Phinisee is still in concussion protocol and will not play on Saturday against Jacksonville. #iubb

Beyond Phinisee’s status, tracking Indiana’s turnover numbers and whether it musters up a stronger start than it did on Wednesday night are also worth watching. The win, if the Hoosiers can get it, would be their sixth in a row and push their overall record to 11-2 with 18 Big Ten games to go.