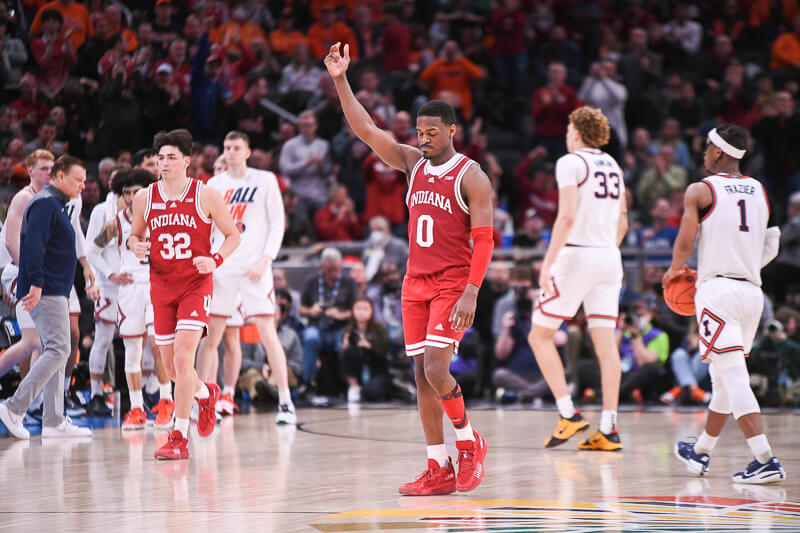 Today, our player profiles continue with a look at senior Xavier Johnson.

Talent has never been a question for Xavier Johnson.

Before arriving at Indiana in the summer of 2021, Johnson was a starter in the ACC at Pittsburgh for three seasons.

As a freshman for the Panthers in the 2018-19 season, he averaged 15.5 points, 4.5 assists, 3.9 rebounds and 1.3 steals. Those numbers landed him on the ACC’s all-freshman team. The other four freshmen on that team? Current NBA players Zion Williamson, RJ Barrett, Tre Jones and Coby White.

Johnson’s career at Pitt ultimately ended with him leaving the program in February of 2021 and entering the transfer portal before the season ended. In his second and third seasons for the Panthers, his numbers regressed from what he produced in his first year. His former coach, Jeff Capel, was irked with Johnson’s propensity to pick up unnecessary technical fouls.

The Indiana coaching staff, however, saw Johnson’s intensity and passion coupled with his talent as a potential upgrade for its roster.

While the Hoosiers were returning Rob Phinisee and Khristian Lander, it was clear Mike Woodson would need more out of the position to make the NCAA tournament in his first season.

Associate head coach Kenya Hunter recruited Johnson while in high school and maintained a strong relationship with him even after he opted to go to Pitt. That connection ultimately helped lead Johnson to Bloomington, where he was immediately inserted into the starting lineup last season.

There were ups and downs for Johnson in his first season in Bloomington, but ultimately Woodson and Hunter’s belief in him paid off. Down the stretch of the 2021-22 season, Johnson’s play helped lead Indiana back to the NCAA tournament for the first time in six years.

As Johnson enters his fifth and final season as IU’s point guard, the Hoosiers need him to take another step forward with his game and maturity to reach lofty expectations as a program.

Last season, Johnson was one of the best distributors in the Big Ten. His assist rate ranked fourth in the conference. He also showed off an improved perimeter shot, knocking down 38.3 percent of his attempts from deep. That was a career-best. He was also one of Indiana’s most reliable free throw shooters at 78.2 percent.

Defensively, he was one of the anchors of Indiana’s defense. He was disruptive on the ball and his steal percentage ranked 12th best in the Big Ten.

The next step for Johnson is consistency. His numbers don’t have to be spectacular, but Indiana needs a high floor out of him that it can rely on every game. That wasn’t the case last season until late in the year. With an ambitious non-conference schedule and a preseason top 15 ranking, Indiana needs Johnson to be a consistent leader on and off the floor.

“Watching him go through his summer work, because he did taste some success, it’s the first time he had experienced being in the big dance,” Woodson said. “He just came in with a totally different attitude, which was kind of nice to see. It means to me he’s growing up. It has displayed nicely on the basketball court, because out of all the summer play that I’ve watched and been a part of, he’s probably been the brightest of them all.”

Bottom line: Johnson is arguably the best point guard in the Big Ten and is a major key in Indiana’s Big Ten title hopes. After an offseason arrest, he’s said and done all of the right things leading into the season and owned up to his mistake. For Indiana to reach its ceiling as a team, it needs Johnson to be a steadying presence on the court and in the locker room. If that happens, the Hoosiers have legitimate Big Ten title aspirations.

Quotable: “Well, when you look at what happened to X, where we started with X and where he ended up, X probably caught more hell on this team than anybody from his head coach. There’s a reason why. I think when you’re building a basketball team, you expect a lot out of all of your players, but that position is a pivotal position in terms of how you play on both ends of the floor. X hung in there with me. He fought me at times, but it worked out well for him at the end and for our ballclub.” – Woodson at Indiana’s media day last month.