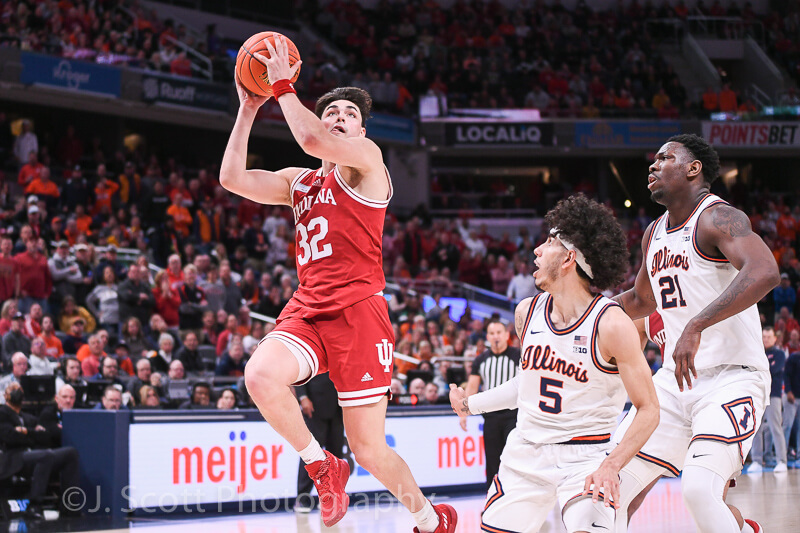 Today, our player profiles continue with a look at junior Trey Galloway.

Injuries derailed what was an otherwise productive 2021-22 season for Trey Galloway.

The Culver Academies product suffered a broken left wrist in Indiana’s narrow win over St. John’s in the Gavitt Tipoff Games. The wrist injury and subsequent surgery cost Galloway 10 games. It also robbed Galloway of the opportunity to gain experience during the non-conference portion of the schedule.

Galloway returned for Indiana’s 67-51 win over Ohio State on Jan. 6. It was one of his best performances of the season as he scored eight points, dished out four assists, grabbed three rebounds and had two steals in 19 minutes. A month and a half later,  “lower-body injury,” which turned out to be a groin issue, kept Galloway out for five straight Big Ten games in late February and early March.

Despite these setbacks, Galloway was highly effective when he was on the floor. His energy on both ends of the floor was palpable. Galloway ended his second season in Bloomington with averages of 5.5 points, 1.8 assists and 1.7 rebounds in 20.8 minutes per game.

In the offseason, Galloway underwent surgery on his groin that kept him out for a significant period over the summer. At Indiana’s media day last month, Galloway declared that he’s fully healthy and ready to go for the start of the 2022-23 campaign.

“It took a lot (to get healthy),” Galloway explained. “It took a lot of treatment, a lot of rehab stuff that I had to do with Timmy G (Tim Garl). It took time. I had to be patient. But I feel like I put myself to be in the position where I am now.”

The position where Galloway is now is firmly in the mix of the backcourt and wing rotation.

The strength of Galloway’s offensive game is his ability to get to the rim and into the lane and finish plays. Galloway can play some point guard if needed and is a more than adequate ball handler. Over his first two seasons at Indiana, he’s connected on 56.7 percent of his 2-point field goal attempts. Last season, he shot 58.3 percent at the rim. That was a higher percentage than Xavier Johnson, Rob Phinisee, Parker Stewart and Tamar Bates.

What hasn’t materialized for Galloway, however, is his perimeter shooting. Last season, he connected on just 6-of-28 from distance. For his career, he’s made just 12 of his 61 attempts from beyond the 3-point line, which is 19.7 percent.

“It’s a big emphasis,” Galloway told Inside the Hall. “I think doing all of the little things with my shot, taking the right amount of reps, doing the right things, making the right reads is the biggest thing for me. Just knowing when to shoot and when not to. I think just shooting the ball with confidence and keeping the reps up has been huge for me.”

Defensively, Galloway finished last season with 18 steals in 20 games and a steal percentage of 2.6, which tied Phinisee for the highest mark on the team.

With his size and athleticism, Galloway is a disruptive defender the coaching staff can trust to guard multiple positions.

Bottom line: The competition for wing and backcourt minutes is stiff. Indiana returns two starters in Johnson and Miller Kopp and adds a five-star guard in Jalen Hood-Schifino. That likely leaves Galloway in a reserve role where he’ll compete with Bates, Anthony Leal, CJ Gunn and perhaps Kaleb Banks for minutes on the wing. With his experience and productivity, Galloway should find himself in a role similar to last season. He’s a bonafide spark plug off the bench and a competitor on both ends of the floor. He’s the type of player that can get under the opposition’s skin and the Indiana faithful embrace for his willingness to make the hustle plays to win games.

Quotable: “You’d never know — he played, what, 18, 19 minutes. It was like he played 40 minutes the way he played. You never know how a guy, when he’s injured, how he’s going to respond coming back because practice is not the same as game speed. But I thought he was right in tune with what we were doing, and boy, he made a lot of great plays on both ends of the floor.” – Mike Woodson after Galloway’s performance against Ohio State on Jan. 6, 2022.