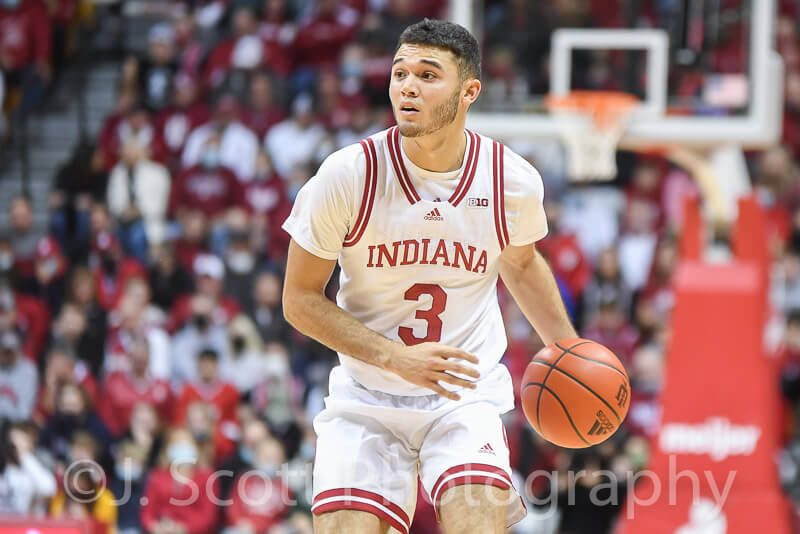 Today, our player profiles continue with a look at junior Anthony Leal.

As a Bloomington native, it feels like Anthony Leal was born to play in Assembly Hall.

The 2020 Indiana Mr. Basketball, Leal finished his sophomore year with the Hoosiers in a similar fashion as he did his freshman year. He got sparing playing time off the end of the bench in 17 games and totaled two starts for Mike Woodson. As a freshman, Leal played in 20 games for Archie Miller.

The 6-foot-5 guard started his first career game on Dec. 22 against Northern Kentucky, due to a Parker Stewart disciplinary issue which kept the usual starter on the bench for the first half. Then, in February, Leal started at Northwestern after five Indiana players were suspended — including guards Stewart and Xavier Johnson. At Northwestern, Leal tied his career-high of 34 minutes and scored five points.

Leal’s best game in an Indiana uniform came in January of his freshman year at Wisconsin. In Madison, Leal played 34 minutes and shot 3-of-6 from beyond the arc. Leal finished with nine points off those 3pointers, a career-high in both categories.

Heading into his junior year, Leal told Inside the Hall he’s emphasized getting rid of hesitancy and feeling more confident with the ball in his hands. When Leal saw the court the past couple of years, that timidness was noticeable. He just looked uncomfortable.

Leal also has room to improve on the defensive end. At times, Leal has struggled to defend without fouling. In both the Wisconsin and Northwestern games mentioned before, Leal ended those games with seven combined fouls. It’s an issue that will need to change if Leal wants to see more of the court. Under Mike Woodson, the emphasis on individual defense has been huge. We saw that last year with guys like Leal, Khristian Lander and Tamar Bates. When conference play started and they couldn’t keep up defensively, they simply didn’t play as much.

“I’ve got the most potential defensively… I think if I can continue to grow and develop and be a guy that can guard the other team’s best wing player, then I’m gonna have a great opportunity to play,” Leal said at Indiana’s media day.

Offensively, Leal came to Indiana as a knockdown shooter, but it hasn’t really worked out that way so far. In his first two years, Leal only shot 16-of-52 (31 percent) on 3-pointers. In two years, Leal has only attempted seven field goals that were not 3-pointers. If Leal can become a two-way player and shoot from outside at a high clip, he could see more time this year. It might be out of the realm of possibility to see Leal getting up and downhill at this point in his career.

It’s also important to note that Leal has been dealing with an injury. At Hoosier Hysteria on Oct. 7, Leal was wearing a walking boot on his right foot and did not participate in the scrimmage or any competitions. This is something to keep an eye on as we near closer to the exhibitions and the start of the regular season.

Last season, Leal’s impact was mainly seen on the bench energizing his team. You may have noticed the bench’s candy-striped leg kick free throw celebration in the Big Ten tournament or Leal asking Race Thompson who has the best beard on the team at media day.

Bottom line: Barring any injuries — Leal likely won’t see much of an increase in minutes this season. But his role on the bench doesn’t go unnoticed. If he can provide a spark of energy when he does see the court and continue being a supportive teammate, it will go a long way for his fellow Hoosiers on the court. Defense and confidence were the points of emphasis for Leal over the summer. If he can become a reliable 3-point shooter and compete on the defensive side, it’ll add some healthy depth to Indiana’s bench this season.

Quotable: “You’ll have your stats and all this stuff you earn on the court, but where you really impact people is what you do besides that. So I try to set a good example, be a great friend, be a great person and in terms of the way I am on the bench… I just imagine if I were out there playing I would want my bench to support me and cheer me on and support me no matter what happens. So I try to start that and kinda get a trend going where guys are all supporting each other and the energy’s contagious. So I try to invoke some passion and I think it has helped and will continue to help.” – Leal on the impact he has made on the bench and in the locker room.