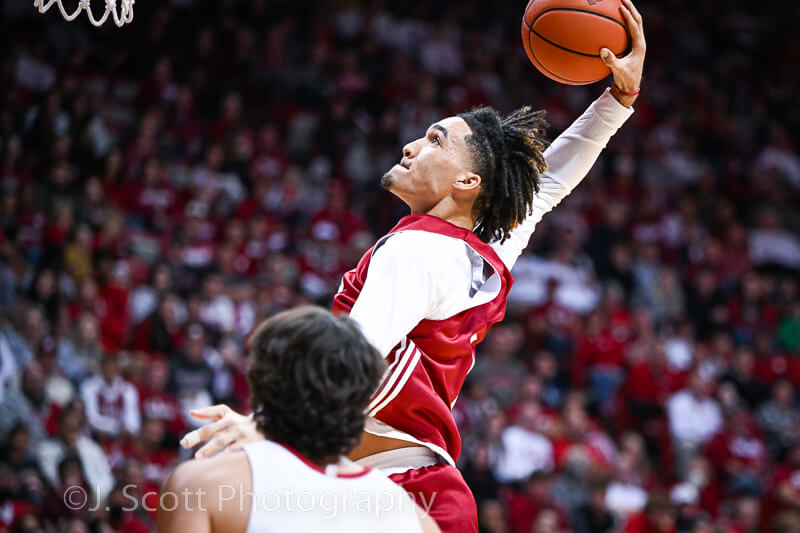 Today, our player profiles continue with a look at freshman Jalen Hood-Schifino.

Indiana basketball will enter the 2022-23 season with its highest KenPom ranking since the 2012-13 season.

Expectations are lofty for a program that barely made the NCAA tournament a season ago and is returning mostly the same cast of contributors.

While it is fair to expect improvement from IU’s returnees, an infusion of talent will be the primary difference from last winter.

The headliner for IU’s nationally-ranked 2022 recruiting class is Jalen Hood-Schifino. The 6-foot-6 guard is the highest-rated recruit to sign with the Hoosiers since Romeo Langford in 2018. Since 1998, Hood-Schifino is the 9th highest-ranked recruit for the program.

It’s no secret that Indiana’s play at the two-guard position last season was underwhelming. Parker Stewart occupied the majority of the minutes next to Xavier Johnson. Stewart shot it well from the perimeter but was one-dimensional offensively. He also had his share of struggles defensively.

The solutions on the bench for Mike Woodson had flaws, too. Tamar Bates shot poorly all season, Trey Galloway battled injuries and was only 6-of-28 on 3s and Anthony Leal also shot less than 32 percent on 3s.

In Hood-Schifino, Indiana has a freshman with a college-ready body and game. Standing 6-foot-6 tall and weighing 215 pounds, Hood-Schifino has the prototypical size for a combo guard. He should be able to take some of the ball-handling pressure off of Johnson. Hood-Schifino is also a capable scorer from all over the floor and is a threat to get to the rim off the dribble. Defensively, Hood-Schifino has the size and athleticism to be impactful right away.

Before his junior season, Hood-Schifino transferred to national powerhouse Monteverde Academy in Florida. Hood-Schifino also chose to reopen his recruitment. Indiana became heavily involved in Hood-Schifino’s recruitment in the summer of 2021, just months after Mike Woodson’s hiring in Bloomington. After landing his first five-star recruit in Bates in April of 2021, Woodson earned a commitment from Hood-Schifino in August of 2021.

At Montverde, Hood-Schifino won two GEICO High School Basketball National titles and was named a Jordan Brand All-Star. This past summer, he was selected to participate in Chris Paul’s point guard camp in Los Angeles. At the program’s recent pro day in Bloomington, Hood-Schifino showed off his game in front of numerous NBA personnel. One recent mock draft pegged him as a first-round pick after this season. A panel of Big Ten media named him the preseason freshman of the year in the league.

With the season just weeks away, we’ll soon learn if Hood-Schifino is ready to meet lofty expectations with the type of production that can lead to more wins for Indiana.

“Schifino has been a great addition to our ballclub because he can do a lot of things on the basketball floor,” Woodson said last month at IU’s media day in Bloomington. “But he’s got to be held accountable to play at a high level and help us win basketball games. I’m going to need him to do that.”

Bottom line: Hood-Schifino is one of the most talented newcomers entering the league and should slide right into Indiana’s starting lineup in the spot vacated by Stewart’s transfer. Offensively, his versatility should give Indiana a different look by adding a second capable ball handler and playmaker alongside Johnson. He’ll need to be able to knock down open 3-pointers to keep defenses honest. Defensively is often the biggest area where freshmen struggle. And it is a non-negotiable for Woodson, who built the league’s best defense last season in his first season. Hood-Schifino has all of the tools to defend at a high level.

Quotable: “His toughness. His willingness to work. His unbelievable work ethic. He really enjoys, you know, strength and conditioning. He enjoyed having to grow. He enjoyed the process that was required of him to become the player that he’s become. And, you know, he came in (to Montverde Academy), he was not a guy that was about himself, he was about the team. And that was really, really important.” – Montverde Academy assistant coach Rae Miller when asked what stands out about Hood-Schifino.