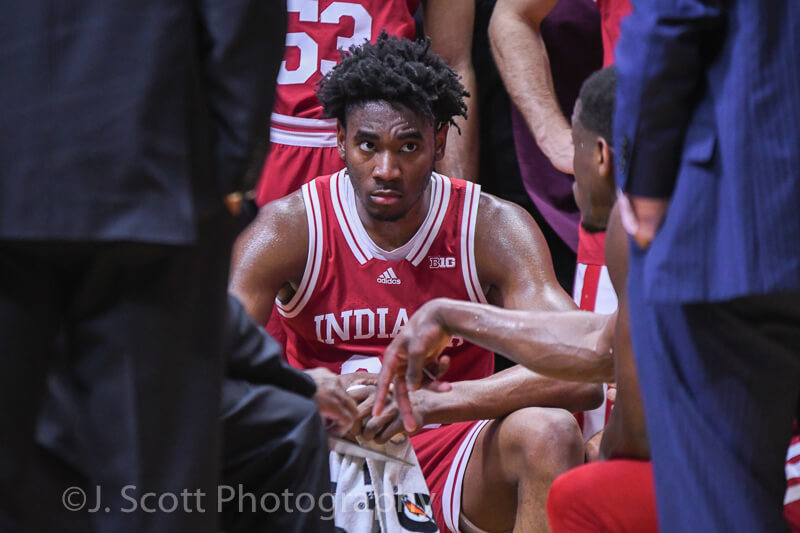 Today, our player profiles continue with a look at junior Jordan Geronimo.

Jordan Geronimo is ready for a bigger role in Bloomington.

He knows what he can bring to the team, and is dialed in on doing just that. He’s not worried about scoring the most points or showing up with the biggest, flashiest plays.

“I’m just going to stay in my role and be the best I can be at my role,” Geronimo said at Indiana basketball’s media day last month. “Play defense, rebound, bring energy, all of that kind of stuff.”

The forward is entering his junior year with essentially the same storyline surrounding him as last year — this could be his big year.

Last season, Geronimo averaged 4.4 points and 3.6 rebounds per game, coming off the bench for an average of 12.5 minutes per game. However, he seemed to break through in Indiana’s NCAA tournament games against Wyoming and Saint Mary’s.

Geronimo posted a career-high 15 points against the University of Wyoming and supplemented that offense with seven rebounds. During Indiana’s loss to Saint Mary’s College, he scored nine points and grabbed six rebounds. After those standout performances, the question is simple.

Can Geronimo carry that success over to this season, and will it be more consistent?

If he’s to earn more regular playing time, it will have to be. With Indiana’s depth of possibilities for playmakers, especially at the forward positions, there is no guarantee of consistent or lengthy minutes. But, like anyone else, Geronimo knows that, and he’s working to improve his game in any way he can.

Some necessary improvements will need to be made if Geronimo wants consistent playing time, like ball-handling and shooting. However, while he will need to be more successful offensively, he doesn’t need to become the team’s top scorer.

Instead of focusing on being a driving offensive force, it’s more likely Geronimo is going to be influential around the basket by rebounding and blocking shots.

“We’ve been trying to get him to understand: The NBA is paying guys that look like him,” Indiana’s associate head coach Yasir Rosemond said in an interview with The Athletic in August. “Even if you average two points, and just go out there and rebound, block shots, defend and make open 3s, you can have a big-time year.”

Over the summer Geronimo said he brought up the concept of playing as a small forward to Mike Woodson as a way to expand his game. In training for that role, Geronimo has had to learn how to defend on the perimeter and how different plays are run, growing his understanding for the game as a whole.

It’s difficult to find a downside to a versatile player who knows how to defend in different ways, and is comfortable in different situations. It’s been said before, and it will be said again: versatility is one of the most important things for Indiana to have this season.

With such high expectations on the individual players and the team, all eyes will be on everyone on the court. The good thing for Indiana is most of those players, including Geronimo, will have experience they have learned from.

For Geronimo, it seems like he has all of the natural capabilities. With a 7-foot wingspan and 40-inch vertical, Geronimo holds a great deal of potential that has revealed itself in small amounts throughout his career as a Hoosier.

Now, it seems the biggest things for him to work on are more mental. Confidence and a positive attitude can easily translate into improved skills, like better decision making and approaches to the game as a whole.

If Geronimo brings those improvements to the court and builds upon his success from the end of last season, he’s going to be difficult to keep off the court.

Bottom Line: One of the biggest things that will keep Geronimo from having a big season is himself. The natural athleticism is clearly there, and he has been a big contributor in key moments. Competition will be at an all time high, but Geronimo’s athleticism and previous displays of talent set him up well. He’ll be able to come off the bench with a burst of energy and could be instrumental in a multitude of ways.

Quotable: “I think the key is more of a mental kind of standpoint… I’m already athletic. I feel like if I was to always just be consistent and keep pushing myself and play hard every single time, the athleticism is going to shine. So, I feel like the next step into improving my game or showing my actual game is just being positive, always having like a battery, always just trying to make the extra play. I feel like that would really show my potential.” – Geronimo on a Zoom call over the summer.