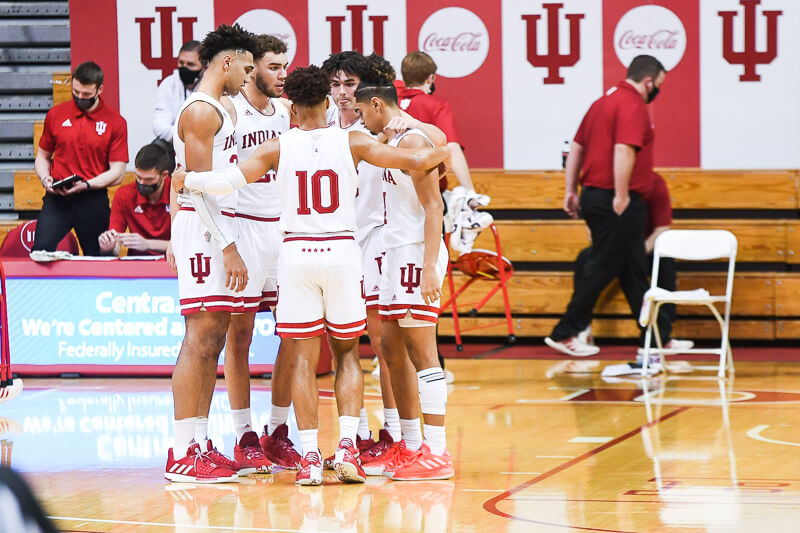 Indiana split its two games this week, winning against Maryland and falling in double-overtime against top-10 ranked Wisconsin. The Hoosiers now sit with a 7-5 overall record and 2-3 mark in the conference.

Sophomore guard Armaan Franklin missed the game against Wisconsin due to an ankle sprain that he suffered early on against Maryland. The timetable for his return is unclear, but he’s a piece that IU undoubtedly needs back in the near future.

The Hoosiers are getting ready to embark on an important stretch in the Big Ten. Indiana needs to take care of Nebraska and Purdue in its next two scheduled games before they play both Michigan State and Iowa on the road.

You can listen to this week’s Podcast on the Brink here and a replay of Assembly Call’s IU-Wisconsin postgame show here.

Hoosiers fall to Badgers in double-overtime

Indiana came up short on the road against Wisconsin on Thursday night, falling 80-73 in double-overtime. The Hoosiers had chances to win the game at the end of regulation and first overtime but were unable to convert.

“We didn’t execute out of the timeout to keep the spacing,” IU head coach Archie Miller said about IU’s final offensive play in overtime that resulted in a jump ball going back to the Badgers. “Not being able to get that shot was disappointing.”

In double-overtime, Indiana was outscored by seven thanks to Tyler Wahl’s two 3-pointers.

Trayce Jackson-Davis was stellar for the Hoosiers, scoring 23 points and collecting 12 rebounds. With the absence of Armaan Franklin, freshman Anthony Leal and sophomore Jerome Hunter both stepped up, combining for 21 points. Al Durham also contributed 15 points of his own.

In the end, though, the Hoosiers weren’t able to close out the game when it mattered most.

Indiana took down Maryland 63-55 on Monday behind Trayce Jackson-Davis’ 17-point second-half effort. He finished the game with his third double-double of the season, tallying 22 points and 15 rebounds.

“Trayce was big, he obviously flipped it around in the second half which is what good players do,” Archie Miller said. “I didn’t think he could have played any weaker around the rim in the first half. Then in the second half he was much more himself jumping, rebounding, offensive stick backs, got fouled and really had a great second half for us.”

The Hoosiers got off to another slow start and their offense was stagnant. Sophomore guard Armaan Franklin, who has been one of Indiana’s most consistent players, went down with an ankle injury early in the game. Indiana was down by six at halftime and had only scored 21 points.

But the Hoosiers flipped the switch in the second half, outscoring Maryland by 14 points and escaping with the victory. Race Thompson also provided a huge lift with 13 points and 11 rebounds while also making 5-of-5 shots from the free-throw line.

“I thought Race Thompson probably had one of his best games of the season for our team,” Miller said. “He had a double-double, but I thought his defense in particular in this game, guarding the dribble was really important. He did a really good job there.”

Indiana to take on Nebraska Sunday

The Hoosiers are scheduled to finish up their two-game road trip when they play Nebraska on Sunday at 6 p.m. The game will be broadcast on the Big Ten Network.

The Huskers will enter the contest with a 4-7 overall record and are amidst a four-game losing streak. All of those games, however, have been against top-25 Big Ten competition but were not particularly close. They were scheduled to play Purdue last week, but the game was postponed due to COVID-19 concerns.

This is a game that IU absolutely needs to win in order to stay relevant in the Big Ten standings.

NCAA Tournament to be held exclusively in Indiana

The 2021 men’s basketball championships will be held solely in the state of Indiana, the NCAA announced on Monday.

Sites for the games include Assembly Hall, Bankers Life Fieldhouse, Hinkle Fieldhouse, Lucas Oil Stadium, Indiana Farmers Coliseum and Mackey Arena. The Indiana Convention Center will be used as a practice facility for the teams.

“This is a historic moment for NCAA members and the state of Indiana,” NCAA President Mark Emmert said. “We have worked tirelessly to reimagine a tournament structure that maintains our unique championship opportunity for college athletes. The reality of today’s announcement was possible thanks to the tremendous leadership of our membership, local authorities and staff.”

Safety protocols were also released. Teams will eat in physically distanced dining rooms and have secure transportation to games. Before arriving at the event, all tier 1 staff must test negative for COVID-19 seven consecutive times.

Indiana sophomore forward Trayce Jackson-Davis was included in the midseason 25-man watchlist for the John R. Wooden Award, it was announced Wednesday.

Jackson-Davis has been been the centerpiece for IU this season, averaging 20.5 points, 9.2 rebounds and 1.8 blocks per game. He’s consistently been in the top-10 in KenPom’s Player of the Year rankings.

“He was a warrior for us,” Archie Miller said of Jackson-Davis earlier this season. “He’s showing why he’s one of best players in college basketball. He has to keep growing and be motivated to take the team to another level.”

The football season is in the books now, but several big player decisions in regards to whether they would return next year were made and mostly turned up gold for IU. Also, Women’s Basketball continues to be near the top of the Big Ten.

• Football got surprising but welcome news when star WR Ty Fryfogle announced on twitter that he will bypass the NFL draft and return for another year as a Hoosier. However, IU’s other big name WR Whop Philyor will leave and declare for the NFL draft. Other senior players to announce they are returning on twitter include Michael Ziemba, Raheem Layne, Marcelino Ball, and Mackenzie Nworah.  Also, head coach Tom Allen was named a finalist for the George Munger Coach of the Year Award and the team mourns the loss of former player Jamie O’Hara .

• Wrestling becomes the fourth Indiana athletic team to begin competition this year (following Football and Men’s and Women’s Basketball) during the COVID 19 pandemic when they face off against Illinois today at 12pm on BTN.

• Swimming and Diving announced their schedule for this upcoming winter. Also three Hoosiers were honored by SwimSwam.

• Track and Field and Cross Country also announced their schedule for this winter.