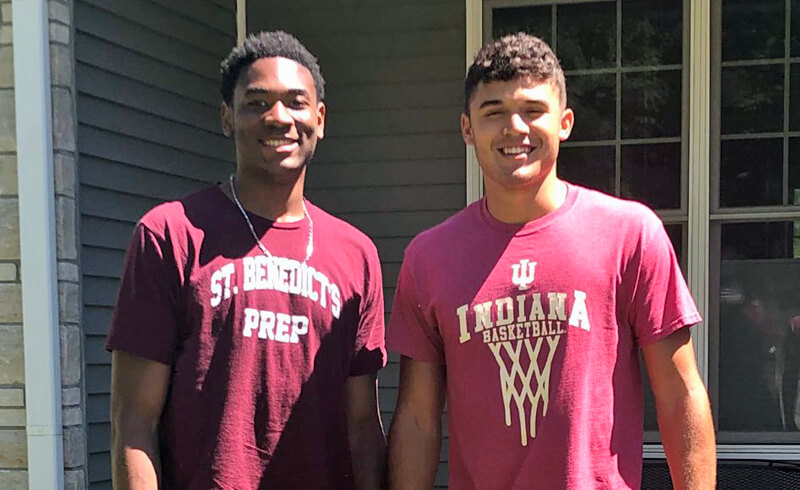 As sports slowly begin plans to start back up, Indiana’s athletes are returning to campus and beginning workouts.

With the anticipation to have the players back together and training, videos are surfacing of some Hoosiers on the hardwood.

This week also provided an updated look at where IU’s 2021 targets stand on a national scale, as well as an in-depth look at one specific prospect.

There was also a discussion about the Hoosiers’ perennial point guard, and IU made an important and inspiring decision regarding one of its buildings. All that and more in this week’s Six-Banner Sunday.

• IU renames Intramural Center after Bill Garrett
• Freshmen and players begin to return to campus
• An in-depth look at Trey Kaufman’s progression, as well as updates on class of 2021
• Can Rob Phinisee be a consistent force for IU?
• Indiana All-Stars react to cancellation of summer series
• Hoosier Sports Roundup

On Friday, a meeting of the Indiana University Board of Trustees resulted in a unanimous decision to rename IU’s Intramural Center after Bill Garrett, the first African American player to compete in the Big Ten.

The Intramural Center had been nameless for two years after IU decided to remove Ora Wildermuth’s name from the facility because there were concerns he had racist beliefs and views.

Rumor swirled on who it should be named after, with Garrett and George Taliaferro among the popular options.

Friday’s name change was approved after IU President Michael McRobbie delivered a report to the Board of Trustees that called for the change, which was then immediately approved.

“Appropriate signage will be placed on the building to honor this great alumnus of Indiana University and one of its true courageous leaders in the integration and acceptance of African Americans in basketball at both the collegiate and professional level,” McRobbie wrote after the measure was approved.

Freshmen and players begin to return to campus

On June 11, Anthony Leal’s mom tweeted out a picture of her son and Jordan Geronimo, signaling they are both on campus and in Bloomington.

This comes a week after IU announced its plan to have athletes return to campus and begin voluntary workouts. The football team began returning players this week, testing them for COVID-19 upon arrival and having them quarantine until the results are available. Once players are cleared, they can begin working out in groups of 10.

IU’s plan stated that “the second group will consist of the men’s and women’s basketball players, who will begin voluntary workouts on June 18. Like the first group, they will go through the same pre-participation process.”

So, the Hoosiers will begin working out this week as a team.

This past Friday, Jordan Basye, an assistant coach for Indiana Elite, posted videos on Twitter of Leal and Geronimo working out together. There were two videos, one involving only 3-pointers and one with only dunks.

It provided IU fans with a glimmer of hope, seeing the two freshmen put in work together as the team plans to all reunite soon.

An in-depth look at Trey Kaufman’s progression, as well as updates on class of 2021

Alex Bozich caught up with Silver Creek head coach Brandon Hoffman to talk about Trey Kaufman’s game as he heads into his senior season, one that could turn into a personal campaign for the 2021 Indiana Mr. Basketball honor.

Hoffman said Kaufman likes to point out things that could be seen as weaknesses and work to improve those, rather than just focusing on his strengths.

“He’s obviously done a lot of work on his body,” Hoffman said. “We’re going to find out here soon, when we’re able to get back into the gym together, the ones who invested their time and the ones who wasted it. And Trey definitely invested. He’s been working with a trainer and has gotten a lot more athletic.”

As for other 2021 targets, that was a major talking point on this week’s edition of Podcast on the Brink, when Bozich was joined by Corey Evans of Rivals.com. Here is also an updated list on where IU’s 2021 targets are in the current national rankings.

Aminu Mohammed is a big target, being a five-star wing who is currently ranked 13th nationally. Here are some highlights from his junior season.

Can Rob Phinisee be a consistent force for IU?

On this week’s edition of Assembly Call Radio, host Jerod Morris was joined by Andy Bottoms and CrimsonCast’s Scott Caulfield to discuss their thoughts on if they think rising junior guard Rob Phinisee can be a consistent force for the Hoosiers.

Phinisee’s first two years at IU have been promising, but he’s been riddled with injuries, which has caused a lot of inconsistency in his game over both his seasons. But there’s no denying, when Phinisee is at his best, Indiana is a completely different team.

He is Indiana’s best perimeter defender, and arguably now the best defender on team after Justin Smith transferred to Arkansas. Phinisee is also a calming presence with the ball in his hands and really personifies the true point guard role.

Indiana’s backcourt will have some depth this season, which is complete opposite from last season. The returning guards of Phinisee, senior Al Durham and sophomore Armaan Franklin will be joined by incoming freshman Khristian Lander to provide Archie Miller with a lot of options.

Phinisee, of course, could be the back bone of the backcourt. The only question is can he stay consistent and be more of a force for the Hoosiers? Take a listen to the in-depth conversation on ACR to find out their thoughts.

The Indiana All-Star series every summer is an experience where the top high school talent in the state of Indiana join forces and compete against the top talent in Kentucky.

The Indiana boys lead the series over Kentucky 99-44 and Indiana girls have a 50-38 advantage.

Unfortunately this summer, the series had to be cancelled due to COVID-19.

Dylan Wallace caught up with Indiana All-Star director Mike Broughton, as well as All-Stars Nijel Pack and Kristian Young to talk about what being on the team means to them and how disappointed they were when they couldn’t compete. The story was a testament to how much high school basketball means in Indiana.

Indiana All-Stars and IU commits Anthony Leal and Trey Galloway were not made available to be interviewed for the story.

• Golf announced the official opening of their brand new Pfau Course for June 15, but also is implementing procedures to limit the spread of Covid-19

• Football is returning with careful procedures as well to limit the spread of Coronavirus. Also, a round table discussion was done with recent former linebacker greats Chris Covington and Tegray Scales.

• Q and A’s were done with Water Polo’s Izzy Mandema and Katherine Hawkins.

• Swimming and Diving coach Ray Looze made an appearance on a podcast.

• Finally in another Covid-19 related story with a positive vibe this time, Men’s Tennis player Patrick Fletchall is teaming up with others to help raise money to fight the disease by playing Tennis.