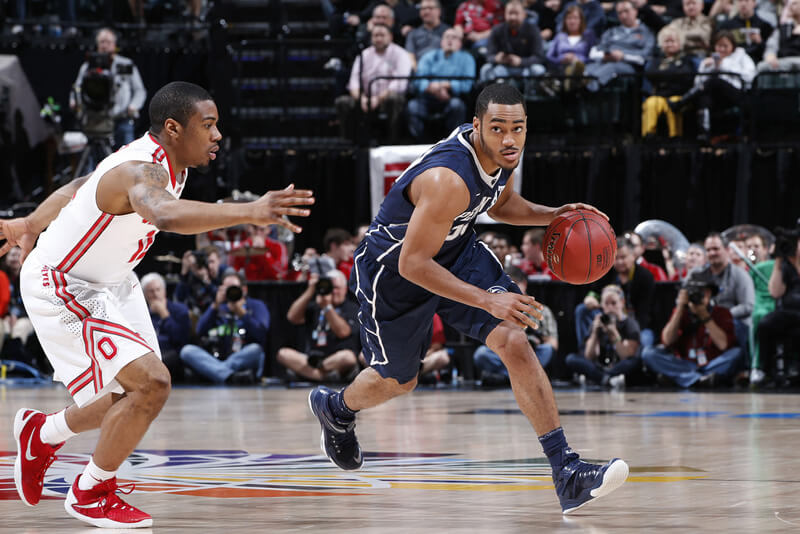 With the start of college basketball season on the horizon, we’ll be taking a long look at the conference at large as well as Indiana’s roster over the next month. Today, we continue our Big Ten team previews with the Penn State Nittany Lions.

As Pat Chambers enters his sixth season at the helm at State College, it appears he finally has the Penn State program on the rise.

The Nittany Lions have won 50 games over the previous three seasons, but finally look like a strong candidate to make a move up in the Big Ten standings.

Four core contributors are gone from last season’s 16 win team, but Chambers returns his best player in Shep Garner and also welcomes one of the league’s top recruiting classes. The 6-foot-2 Garner averaged 14.8 points and 3.4 assists as a sophomore and should be paired in the backcourt with freshman Tony Carr. The 6-foot-3 Carr was a top 10 point guard nationally in the class of 2016 and should allow Garner to play more off the ball.

Penn State should have plenty of depth in the backcourt as sophomore Josh Reaves, freshman Nazeer Bostick and junior Terrance Samuel, a UConn transfer, should all be a part of the rotation. Reaves is a terrific athlete who needs to shoot it better to earn more minutes while Samuel has NCAA tournament experience having played on UConn’s 2014 national championship team.

The frontcourt should have plenty of depth and options as well. Junior Payton Banks is the program’s leading returning rebounder. Julian Moore, a 6-foot-10 junior, will need to finish better (45.6 percent on 2s) to not be overtaken in the rotation by freshmen Mike Watkins and Joe Hampton. Watkins, a four-star recruit in the 2015 class, sat out last season as an academic redshirt. Hampton is 6-foot-8 and 290 pounds, who can score in the paint and also step out to the perimeter.

Freshman Lamar Stevens also figures to be a big part of the rotation. At 6-foot-7, Stevens can play both forward spots and was a high school and AAU teammate of Carr and Bostick.

Penn State will be young, but on paper, this is the most talented roster Chambers has assembled in his tenure.

Bottom Line: Chambers was given a vote of confidence with a contract extension in the spring of 2015 and he’s rewarded Penn State with significant progress on the recruiting trail. The next step for Penn State is translating the improved roster into wins and a postseason appearance of some kind.A challenging non-conference schedule, which includes Duke, Pittsburgh, Georgia Tech and St. John’s, should prepare Penn State for league play. Carr and Garner should be one of the best backcourts in the Big Ten and the improved talent on the wing and in the frontcourt should allow Penn State to inch closer to a 20-win team this season.

Quotable: “We are going to challenge ourselves. We are not going to hide. We want to give ourselves a chance. I just think it’s time. I really want to start to make some inroads in the Big Ten. Seven wins (in 2015-2016) is nice. I want to get 10. I want to get 11.” – Chambers to Blue Ribbon Yearbook.