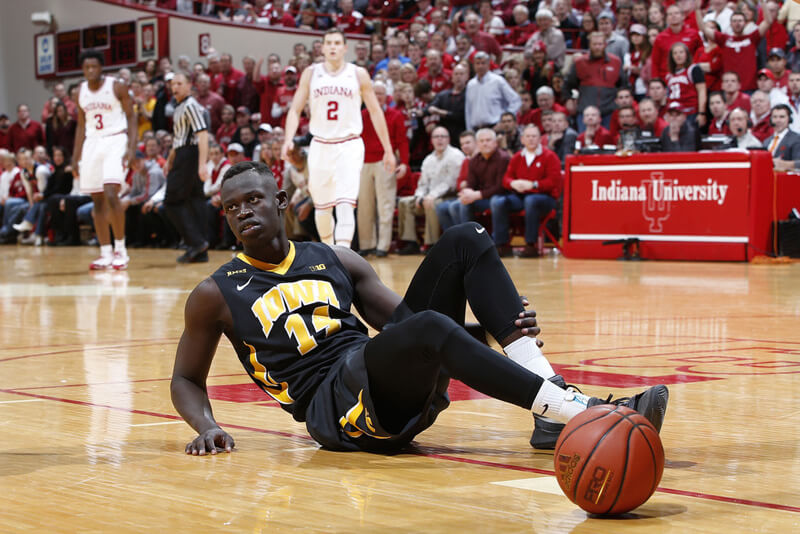 With the start of college basketball season on the horizon, we’ll be taking a long look at the conference at large as well as Indiana’s roster over the next month. Today, we continue our Big Ten team previews with the Iowa Hawkeyes.

It’s a new era for Iowa basketball. The graduation of four starters means that Fran McCaffery will be tasked with guiding the Hawkeyes through a transition season.

The headlining returnee for McCaffery is senior Peter Jok, who should be in the mix for All-Big Ten first team honors. Jok averaged 16.1 points last season season and shot 40.2 percent on 3s on 199 attempts. Jok needs to become a better distributor (10.6 percent assist rate) and more of a leader on the floor, but there’s no question that he’s Iowa’s best player.

The top candidate to replace Mike Gesell at point guard is freshman Jordan Bohannon, who was Iowa’s Mr. Basketball. The 6-foot Bohannon wasn’t highly ranked by the national recruiting services, but should get the opportunity to run the team right away.

Sophomores Christian Williams and Brady Ellingson will have the chance to earn more minutes after playing sparingly as freshmen. Ellingson was recruited for his shooting prowess, but hit just 27.3 percent of his 3s as a freshman. Williams is 6-foot-5, can play multiple positions and could also handle the ball at times.

On the wing, sophomore Ahmad Wagner should grow into a bigger role after a very solid freshman season. The 6-foot-7 forward made 71.1 percent of his 2s last season and was a solid rebounder on both ends. Redshirt sophomore Nicolas Baer scored 15 points against Villanova in the NCAA tournament and hit 39.4 percent of his 3s last season.

Our pick to break out on the roster is 6-foot-9 junior Dom Uhl. Uhl isn’t a traditional big man, but that is part of what makes him intriguing. He shot 45 percent on 3s as a sophomore and just 39.6 percent on 2s. He should be joined up front by freshman Tyler Cook, who should make an immediate impact. Listed at 6-foot-9 and 253 pounds, Cook is Iowa’s highest rated recruit at No. 72 in the final 247Composite for 2016.

Others to to keep an eye on are 6-foot-7 senior Dale Jones, who has battled injuries throughout his career and freshman Maishe Dailey, who is 6-foot-6 and had mostly mid-major offers but ultimately landed in Iowa City as a spring signee. Freshman Ryan Kriener should provide frontcourt depth at 6-foot-9 with the ability to stretch the floor.

Bottom Line: Iowa is a difficult team to project in the preseason and the early projections are indicative of that. The Hawkeyes have been picked to finish as high as eighth in the Big Ten and as low as 11th. It’ll be a challenge for this group to finish in the top half of the league and make the NCAA tournament, but Jok and Uhl should be a solid one-two punch. Beyond that, McCaffery is going to need his young talent to step up to help fill in the production lost from guys like Jarrod Uthoff, Mike Gesell, Adam Woodbury and Anthony Clemmons.

Quotable: “Fran McCaffery’s team was 19-4 and 10-1 in the Big Ten, had home-road sweeps of Purdue and Michigan State under its belt, was universally regarded as a a top-five team/national title contender and was led by a brilliant senior season from Wooden Award candidate Jarrod Uthoff. That, of course, all came crashing down, and no one remembers how good Uthoff or the Hawkeyes were for about the first 70 percent of the season. That’s a shame. The point is the Hawkeyes lost Uthoff, guard Anthony Clemmons, point guard Mike Gesell and center Adam Woodbury. All four were seniors; Gesell and Woodbury started as freshmen. In their wake stands Jok, whose scoring prowess often lifted Iowa’s attack to new heights last season. Can he be as effective without so many weapons — let alone that much entwined, almost-telepathic experience — surrounding him? What is Iowa if he can’t?” – ESPN.com’s Eamonn Brennan.