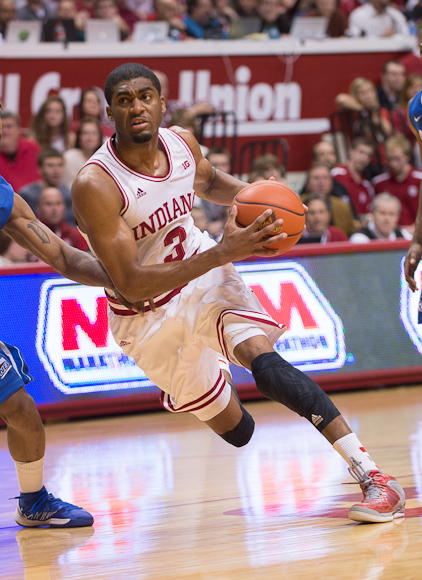 Welcome to “That’s A Wrap,” our player-by-player recap of the 2012-2013 Indiana Hoosiers. Today: Maurice Creek.

For the first time in his IU career, Maurice Creek played in more than 20 games and despite a brief midseason foot problem, the redshirt junior also finished the season healthy for the first time as a Hoosier.

For most players, neither feat would be something to write home about, but for Creek, this was progress after undergoing three major surgeries in 22 months.

The Oxon Hill, Maryland native was mostly used in a role as a shooter off the bench, but a spot in the regular rotation never materialized as he struggled to find his shot for a good part of the season.

The majority of his minutes came in the non-conference portion of IU’s schedule as he logged seven games of 10 or more minutes over the first nine games. By the time Big Ten played rolled around, Creek fell out of the rotation and had just one game (Purdue at home) where he registered more than one field goal.

But as we mentioned earlier, there are still positives to be gleaned from Creek’s 2012-2013 campaign. He finished the season healthy for the first time in his IU career. And there’s hope that with another offseason of work, he’ll continue to make progress and perhaps even increase his role on next year’s team. Indiana will be very young in its backcourt next fall and Creek, who will be entering his fifth year in the program, can fill a role as a leader and also a mentor to IU’s freshman class.

Bottom Line: Regardless of how Creek’s season finished up statistically, it’s hard to view it as anything short of a success. Not many players would be able to continue at the Big Ten level after going through three serious injuries, but it speaks to Creek’s will to get back on the court and also to the talent he possesses that he’s been able to persevere through it all.

His role going forward is uncertain as Indiana brings in versatile guys like Stanford Robinson and Troy Williams, but he could carve out a role as a shooter next season if he can regain his touch.