In its first and only exhibition game of the season, Indiana’s offense proved to be a work in progress. While it exhibited more movement and options than the worst of what we witnessed last season, a lack of familiarity also ... 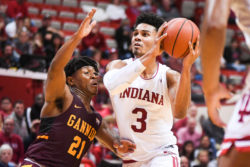 Indiana cruised to an 84-54 win in its final preseason tuneup on Tuesday night against Gannon. The Hoosiers, down a pair of guards in Al Durham Jr. and Devonte Green, led by just one late in the first half before ... 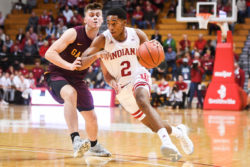 On a night where Indiana was without its captains, it was the freshmen that ignited the Hoosiers to an 84-54 victory over Gannon Tuesday night. Armaan Franklin got the start at point guard with Devonte Green and Al Durham sidelined. ...

The Minute After: Gannon University 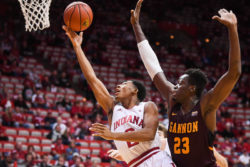 Thoughts on a 84-54 win against the Golden Knights:  With Al Durham and Devonte Green sidelined due to injury, and Rob Phinisee seeing limited time as he works back from his lower abdominal injury, Indiana’s backcourt was thin this evening. ... 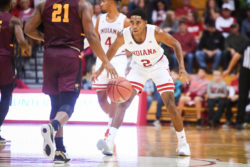 Damezi Anderson and Justin Smith met with the media following Indiana’s 84-54 exhibition win over Gannon University on Tuesday. Watch their postgame comments below: 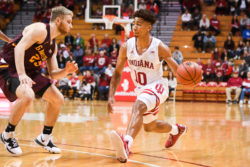 Quick thoughts on an 84-54 exhibition win over Gannon: How it happened: Aside from a brief stretch late in the first half when Gannon took a one-point lead on two occasions, Indiana had little trouble with the DII Golden Knights ... 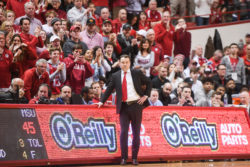 Archie Miller, De’Ron Davis and Joey Brunk met with the media on Monday afternoon to preview Tuesday’s exhibition against Gannon University. Watch both press conferences below:

What to watch for: Gannon University 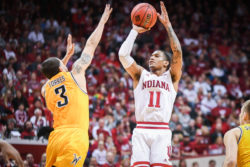 Indiana plays its lone exhibition on Tuesday night as the Hoosiers host Division II Gannon University from Erie, Pennsylvania at Simon Skjodt Assembly Hall. Tuesday’s exhibition will air live exclusively on BTN+, which is not included with a BTN subscription. ... 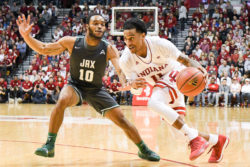 Indiana’s 2019-2020 basketball schedule is now complete. After news trickled out recently that the Hoosiers would play Marquette University in a closed exhibition, Indiana’s lone public exhibition was announced on Wednesday afternoon. The Hoosiers will host Gannon University at Simon ...