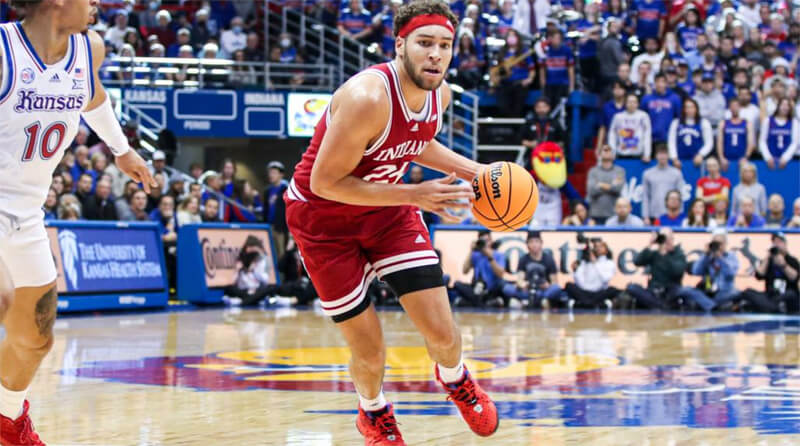 After a week off for finals, IU looked rusty and was easily handled by an elite squad for the second straight week. This time it was defending national champion Kansas who defeated the Hoosiers raising some questions about how good this team is.

Off the court, some better news came for Indiana’s potential NCAA tournament projection, especially on the women’s side. Also, Podcast on the Brink and Assembly Call had new shows this week as did head coach Mike Woodson. We will conclude with a look at how former IU basketball players are performing in their professional careers, as well as how the Hoosiers are currently doing in other sports.

Looking for tickets to upcoming Indiana home games? Vivid Seats has you covered. This week Indiana hosts Elon on Tuesday and Kennesaw State on Friday. With students on winter break, it’s a great opportunity to attend a game and get lower-level seats at an affordable price! Vivid Seats is a full-service provider – with an industry-leading customer service team, reachable by phone or online during extended business hours. (These links are Inside The Hall affiliate links, so a commission will be paid to ITH if you click and make a ticket purchase.)

Banner #1 – Hoosiers lose at Kansas and Xavier Johnson is injured

For the second straight week, many IU fans made the trip to a venue besides Assembly Hall. However, the result was similar both times, as the Hoosiers were manhandled by a much better Jayhawks team seven days after Arizona did much the same to Indiana. While IU was able to get back into the game last week against the Wildcats on a neutral court, they had no such luck in a true road environment in Lawrence on Saturday as they fell 84-62.

Also, while the Hoosiers saw the return of one of their point guards in Jalen Hood-Schifino, they may have lost another for an extended period as Xavier Johnson went down with a foot injury in the first half and did not return. Johnson did tweet after the game that he expects to be back soon despite being seen with crutches and a walking boot when returning to the bench. However, how quickly he returns to the court remains to be seen. IU’s next game against tough competition is not for almost three weeks when the team returns to Big Ten play for good against Iowa on Thursday, Jan. 5.

Afterward, Mike Woodson and Kansas coach Bill Self spoke, Ryan Corazza had his Minute After, William McDermott penned Five Takeaways, and Amanda Foster had a column about the defeat.

With IU’s major non-conference games now in the books, the question remains, how good is this team? In the aggregate, a couple of bracketologists in Joe Lunardi and Delphi have IU as a four-seed. Also, the all-important NET ranking which is the biggest metric the selection committee uses to determine seeding in March Madness is at 16 (these numbers are all from before the loss to the Jayhawks).

The Hoosiers have noteworthy wins over No. 38 Xavier on the road and No. 32 North Carolina at home, and both of those contests are aging well for the NCAA tournament resume. However, the blowout losses away from Assembly Hall to No. 45 Rutgers, as well as top 15 Arizona and Kansas, raises plenty of questions about this squad. The Hoosiers certainly have been tested before Big Ten play for the first time in several years, but the results are mixed and it still has not been answered if this will help Indiana be tougher for conference play.

Also, the squad now sits at No. 17 in the KenPom rankings and No. 27 in Bart Torvik (these rankings are current after the defeat to Kansas).

Meanwhile, on the women’s side, it is all roses so far as the Hoosiers remain undefeated at 10-0 and number four in the NET with noteworthy wins over No. 18 North Carolina, No. 23 Tennessee, No. 32 Illinois, and No. 49 Bowling Green. Bracketologist Charlie Creme has the Cream and Crimson as a No. 1 seed.

Banner #3 – Podcast on the Brink, AC Radio and Doing The Work

Podcast on the Brink and Assembly Call both had new episodes this week. POTB spoke with William McDermott about the season so far.

Meanwhile, Assembly Call had a Thursday radio show previewing the match with Kansas and a postgame episode recapping the defeat to the Jayhawks. Meanwhile, Doing The Work had a show last Wednesday recapping the December 8 win over Penn State by the IU women.

Mike Woodson had his normal radio show last Monday. The episode recapped the win over Nebraska and the loss to Arizona. Woodson also talked about a charity golf outing he hosted in Las Vegas the day after the Hoosiers were defeated by the Wildcats.

Banner #5 – Hoosiers in the pros

Several former Indiana basketball players continue to compete in careers professionally. Per the ProBallHoosiers Twitter account from last Sunday, Eric Gordon scored nine points in a game for the Rockets last week, while Bryant put up five points for the Lakers. Also, Yogi Ferrell had a terrific outing overseas with 18 points for his team in Slovenia. In separate tweets that day from the account, it was revealed Devonte Green has found a new team in Sweden and Romeo Langford had a career-high 19 points for the Spurs, while Victor Oladipo chipped in 11 for the Heat.

A tweet from ProBallHoosiers on Tuesday had scoring stats for Langford, Oladipo, and a couple of others. Also, Green was not the only one to latch onto a squad overseas as Freddie McSwain Jr. has signed to play in Australia.

More results for current Hoosiers playing professionally in basketball and other sports can be found regularly on this account.

• Men’s Soccer suffered a heartbreaking loss in penalty kicks for the national championship against Syracuse. Assembly Call was one of only two non-student independent IU media outlets to be on-site with coverage in North Carolina. A detailed recap of the match for subscribers is available in the Assembly Call Community.

• Jaylin Lucas was one of the few bright spots as a freshman for IU football this season and earned All-American honors.

• Softball announced its schedule for the upcoming spring season.