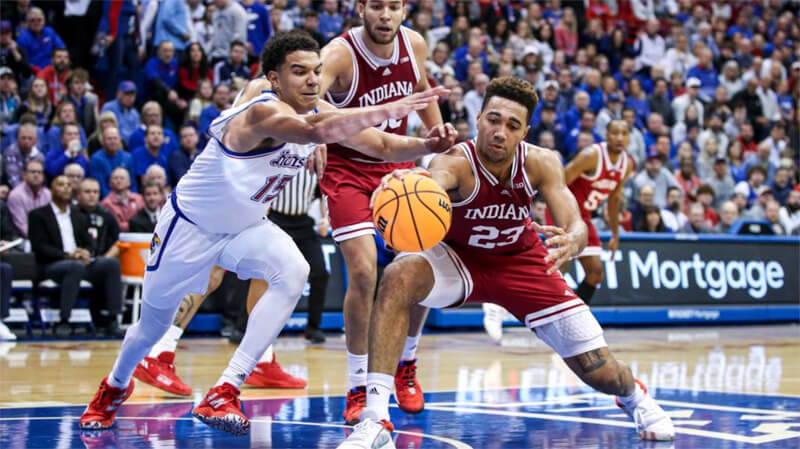 LAWRENCE, Kan. — Indiana lost its third game of the season, 84-62 at Kansas on Saturday afternoon.

Indiana’s two best players, Trayce Jackson-Davis and Xavier Johnson (who left the game in the first half with a foot injury), shot a  combined 2-for-6 from the field with four turnovers.

The production of Jackson-Davis over the last two games is concerning. Against Arizona, the All-American only scored 11 points and fouled out. Against Kansas, he only attempted eight field goals.

Against the better competition, Jackson-Davis (along with the rest of Indiana’s offense) seems one-dimensional. Teams are throwing quick double and triple teams at him when he gets the ball on the block and he’s having trouble dealing with it.

“We gotta be more assertive,” Jackson-Davis said. “That doesn’t go on coach Woodson. He prepared us. We had a great game plan going into the game, but we didn’t execute.”

Johnson’s injury didn’t look good. He never returned to the game after departing in the first half and came back to the Hoosiers’ bench for the second half wearing a walking boot on his right foot and using crutches.

“It doesn’t look good. He couldn’t play the second half. We’ve got to get him back and evaluate him,” Mike Woodson said post-game.

Without Johnson and the defense making life difficult for Jackson-Davis, the weight of Indiana’s offense was put on the shoulders of Jalen Hood-Schifino and Tamar Bates. The lack of driving ability from either of them forced Indiana to become a jump-shooting team, which is far from the Hoosiers’ identity.

In the first nine minutes of the game, the Hoosiers had six turnovers, had given up nine points in transition and only had two defensive rebounds.

“I thought this weeks practice was very competitive,” Mike Woodson said postgame. “The damage was already done early…we just weren’t in the game and that ain’t how I want to play.”

In Indiana’s three losses to Rutgers, Arizona and now Kansas, Indiana started slow and got down early. Falling behind early on the road or against top 10 teams isn’t a recipe for success for the Hoosiers.

After digging an early hole, the hill was too high for the Hoosiers to climb. Another slow, unenergized start resulted in another loss.

Indiana didn’t appear ready to play early at Phog Allen Fieldhouse. There was no grit, toughness or urgency. At least after the loss to Arizona, Woodson felt good about his team’s effort. They came back and cut the lead to three in Vegas, but in Lawrence, Indiana never seriously challenged the Jayhawks. The closest Indiana got was 10 early in the second half. But after a Kansas timeout, IU missed a couple of chances to cut the lead to single digits and the Jayhawks put the game out of reach.

Indiana’s season-high 23 turnovers were the ultimate difference maker. As a team, Indiana only made 20 field goals. The Jayhawks attempted 15 more shots than the Hoosiers and scored 28 points off IU’s turnovers.

The turnovers led to 18 Kansas layups and dunks.

“Guys, you can’t turn the ball over 23 times against a good team. That’s 23 times we don’t get an opportunity to score the ball. And they came in bunches,” Woodson said.

The Hoosiers have been “comfortable” handling the ball this season, but in their three losses, they’re averaging 15.6 giveaways a contest.

Turnovers are indicative of a team that lacked attention to detail and cohesiveness offensively. Indiana lacked the ability to execute on Saturday afternoon.

“Beware of the Phog” is reality

Phog Allen Fieldhouse looks like a rec center or even IU’s Bill Garrett Fieldhouse, as Indiana students might be familiar with. The aged yellow brick exterior with bright red roofing gives it a true gymnasium feel. And it feels that way even more so when you walk in.

With bleachers around the stage-lit court, the Phog will leave your back sore. But that doesn’t stop it from being raucous, loud and exhilarating. No, the jumbotron, speakers and graphics might not be considered “nice” or “sensory pleasing” but the feel and aura make up for it. Just imagine 16,000 people jammed into an uncomfortable high school gym.

Before tip and after the final buzzer, church-like chants echoed throughout the stands.

Based on the way it was sung, it felt like a religious service. But then again, that’s likely how Kansas basketball is treated by people in Lawrence.

The environment made a difference for Indiana. Rattled from the start, the moment appeared to be too big for the Hoosiers.

The four big non-conference games are done, what’s next?

In the preseason, most would have agreed that Indiana would go 2-2 in their four big non-conference games this season against Xavier, North Carolina, Arizona and Kansas. And that’s exactly what transpired. But the last two performances have raised significant questions about this team.

The Xavier win was a good and hard-fought victory. The North Carolina win doesn’t hold as much value as it may have entering the season. The Arizona game was a disaster from the tip where Indiana fell behind big early. And against Kansas, the Hoosiers looked the worst, lacking urgency and fight.

Indiana will have a pair of get-right games next week and then take a long break before conference play, but with Johnson’s uncertainty and the last two performances, the Hoosiers have a lot to work on the next few weeks.

What’s most frustrating is that Indiana has the talent and ability to make these games competitive. They just haven’t shown up with consistent effort. The preseason Big Ten favorite’s road ahead will be a challenging one. There will be peaks and valleys. Right now it feels like Indiana is faced with more questions than answers. Ultimately, what kind of team will the Hoosiers be? Will they reach their lofty preseason expectations or give up and surrender as they did against Kansas?