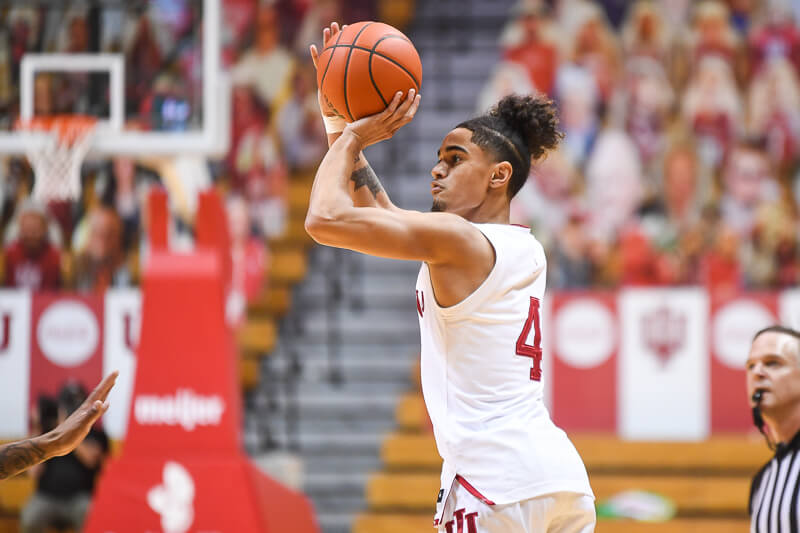 They weren’t on the floor when Armaan Franklin shimmied in front of his defender. They weren’t in the lineup when Franklin’s shot cut through the net to win the game. Or when he skipped across the hardwood, pointing up to his family.

For the last three minutes of the game, they sat on the bench.

But those last three minutes squatting on foam seats, aren’t where Indiana’s four freshmen were defined.

Over the course of the game, they set up the opportunity for Franklin’s shot with their energy and intensity. They kept the Hoosiers in the game after falling in a double-digit hole in the first half. Then they sparked Indiana again in the second half, finishing with a combined 19 points.

All four have taken different paths in their careers with varying roles this season. But on Sunday, Indiana needed not just one, but all four to pull off the 67-65 upset over No. 8 Iowa.

“They changed the game,” Indiana head coach Archie Miller said after the game. “They’ve done it a number of times.”

It was late July of 2019, the summer before their senior years of high school, when this recruiting class began to take form.

It started with Trey Galloway, who was the first to pledge a commitment to Indiana. A hard-nosed guard from Culver Academies with a pit bull-like mentality. He was, though, an under-the-radar prospect with just three-stars next to his name.

Galloway was eager to start a domino of commitments. Less than a month later, the next piece fell into place. Galloway’s friend Anthony Leal announced his commitment to Indiana over Stanford. The two had played together on Indiana Elite, a grassroots AAU program, the prior spring and summer.

Leal was the hometown kid, watching Indiana as he grew up and playing for the local Bloomington South High School. He was also a sharpshooter, the No. 1 player in the state and eventual Indiana Mr. Basketball winner.

In September, the duo became a trio when New Hampshire forward Jordan Geronimo committed to the Hoosiers. Like Galloway, Geronimo was overlooked for much of his prep career.

At that point, it appeared that Indiana’s 2020 class was finished.

But months later, in May, five-star Khristian Lander became the star-studded gem to close out the group. Lander was originally the No. 1 point guard in the 2021 class and committed to Indiana in February, but decided to reclassify and enroll for the 2020-21 season. He’d played on that same Indiana Elite team with Galloway and Leal and was friends with them.

“The combination of all of those guys, IU will have an extremely competitive group that I think will fit Archie more and more,” Jordan Basye, a Bloomington-based trainer, told Inside the Hall before the season. “And kind of the culture will fade more and more in that way over the next couple of years.”

Over the summer, all four became roommates when they moved onto campus. Geronimo, Leal said, fit in seamlessly with the group and they’ve continued to grow their relationship.

As the season began, each one had its highlights and lowlights.

Somewhat surprisingly to some, Galloway was the first to make a significant impact with his playmaking. He earned a spot in the starting lineup in late-December. But recently, a back injury sidelined him for two games.

Leal struggled in the opening months of the season and at times looked timid to shoot. He shined, though, in Indiana’s double overtime loss at Wisconsin, hitting three 3-pointers.

Geronimo’s role was similar to Leal, not seeing much time on the floor early in the season. But in the first matchup against Iowa, he put up a huge defensive effort against Luka Garza.

Lastly, Lander was the one that many believed could immediately be a dynamic star. Instead, he often looked out of sorts. Bad passes and wild shots. Miller often placed his hands on his head in frustration. Lately, though, Lander has looked closer to the five-star recruit.

“Usually every freshman that comes to Indiana is going to be a very highly-regarded player that’s had a lot go right for them and the minute that they step on campus is really the first time in their young adult lives that things get really hard,” Miller said.

And that brings us to Sunday where Indiana’s starting guards combined to shoot 4-of-26 from the field. If Indiana had any chance, they needed major help off of the bench.

Indiana trailed by 13 at one point in the first half. But in the last three and a half minutes of the half, Leal knocked down two 3-pointers. Lander put in another. The Hoosiers went on a 12-2 run to take a two-point lead at the break. Geronimo added four points. Galloway chipped in one point and two assists.

In the second half, Indiana fell into another hole. Not long after, the freshmen returned.

Lander didn’t score, but dished out two assists. Galloway hit a 3-pointer. Leal had a steal. Geronimo contributed two points, one assist and one rebound while continuing to bother Garza. Overall, the ball movement and offensive flow was much crisper with them in the game.

“To watch those guys come in, get hit around, get knocked down, it’s not easy,” Miller said. “Some guys just get up and leave. Some guys never get back up. These four guys have hung with it and made us better.”

By the end, they all played double-digit minutes. Three of the four had positive plus-minute numbers with Geronimo registering a zero. Leal ended with three steals. Their play put Franklin in the position to hit the game-winning shot and Indiana in the position to win.

“I mean if you look at Khristian Lander right now, I mean he’s saving us in a couple of games this week,” Miller said. “To his credit, as a young person, to be able to come to practice every day, to be able to lift weights extra to get in the gym extra with the coaches, to care that much about staying with it, you see those rewards that you want to have happen for them so much.”

“In particular, if you’re talking about the freshmen, you see them at their worst, really at the youngest part of their young lives,” Miller said. “And when they’re able to see some good out of the work that they’ve put in, that’s really rewarding.”

Rewarding it was. For the freshmen. For Miller. And for Indiana.

On an imperfect Indiana team, the freshman are a perfectly imperfect group, just doing everything they can.