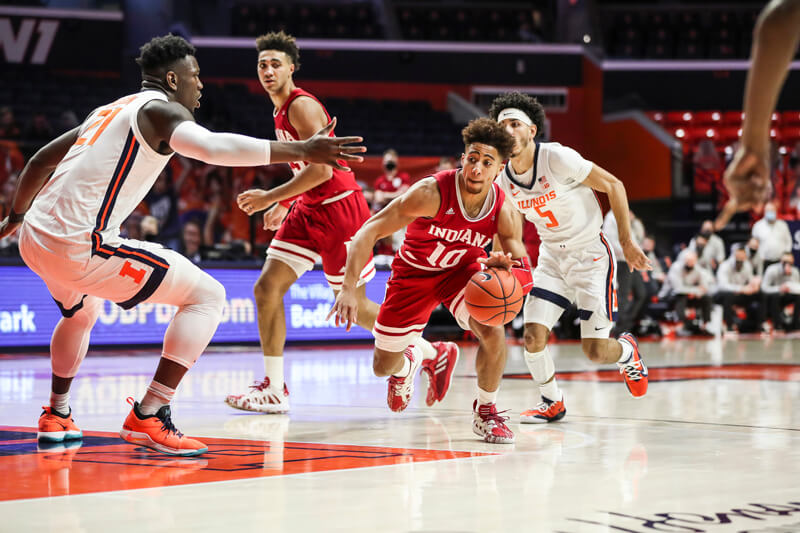 Indiana dropped both of its conference games this week, falling to 0-2 in the Big Ten for the first time since the 2016-17 season. On Saturday, Indiana came up short against No. 18 Illinois in Champaign 69-60. Illinois’ Ayo Dosunmu and Kofi Cockburn combined for 45 points and controlled the game down the stretch for the Illini.

Last Wednesday, the Hoosiers dropped their Big Ten opener to Northwestern 74-67. They struggled to consistently perform on the offensive end and were confounded by a zone that Northwestern occasionally threw at them. Senior forward Joey Brunk, who has been dealing with back soreness, still has yet to play this season.

Indiana will now turn its focus to a struggling Penn State, who they will host in Assembly Hall on Wednesday at 8:30pm on Big Ten Network.

You can listen to this week’s edition of Podcast on the Brink here.

Indiana comes up short against Illinois

Illinois surged ahead of Indiana in the final minutes despite Armaan Franklin’s 23-point performance Saturday. Illinois was led by guard Ayo Dosunmu, who dropped 30 points, and forward Kofi Cockburn, who scored 15.

“He made every big shot,” Indiana head coach Archie Miller said postgame about Dosunmu. “Ayo was the difference in the last 12 minutes.”

Indiana’s defense was phenomenal just like it’s been all season. Illinois was held to just 44 percent from the field and, at one point in the game, were only shooting 2-for-14 from beyond the arc. Down the stretch, though, Illinois turned on another gear behind Dosunmu and finished the game making 35 percent of its 3-pointers.

Indiana’s offense sputtered again, shooting just 40 percent from the field. The Hoosiers did, however, convert on 39 percent of their 3-point attempts, but it wasn’t enough in the end. Trayce Jackson-Davis also struggled for the Hoosiers, scoring 11 points on just 3-13 from the floor.

Less than one week after Northwestern defeated No. 4 Michigan State, the Wildcats traveled to Assembly Hall and took down Indiana 74-67.

“I thought we stunk on both ends of the floor,” Miller said postgame. “There were a lot of breakdowns, a lot of sloppiness and it got us beat.”

It was a continuation of the struggles that have plagued Indiana so much of this young season. The Hoosiers got off to a dismal start with a lack of energy and focus. With around 5:30 remaining in the first half, Indiana trailed by 15 points. The Hoosiers clawed their way back into the game early in the second half, but the Wildcats pulled out a win in the final minutes thanks to late clutch shooting from William and Mary transfer Chase Audige.

Indiana got outplayed in nearly every statistical category. The Hoosiers coughed the ball up a total of 16 times and Indiana’s defense was also uncharacteristically porous.

Trayce Jackson-Davis and Armaan Franklin were, again, the best players on the court for the Hoosiers. Jackson-Davis scored 22 and Franklin added 16. The experienced backcourt of Rob Phinisee and Al Durham was nearly silent, combining for just six points on 0-for-5 from beyond the 3-point arc.

“Both guys are much better players than they played tonight,” Miller said. “We’re going to need them to be better and I know that they will be. Both guys care and they work hard.”

Penn State up next for Indiana

Indiana is back at home in Assembly Hall this week after traveling to Illinois. Indiana hosts Penn State on Wednesday, Dec. 30 and then Maryland on Monday, Jan. 4.

Penn State will enter the matchup with a 3-3 record, but upset No. 15 Virginia Tech in the Big Ten/ACC Challenge earlier in the season. The Nittany Lions dropped their first two conference games to Michigan and Illinois. They have four players that average double-digit scoring numbers and are led by guard Izaiah Brockington, who puts in better than 15 points per game.

In the preseason, Penn State and Maryland were teams picked to finish near the bottom of the conference, so it’s imperative that Indiana takes care of business. It is worth noting, though, that Northwestern was picked as a bottom-dweller in the Big Ten before beating Michigan State, Indiana and now Ohio State. However, the Terps and Nittany Lions seem to be living up to their lowly preseason status, unlike the Wildcats who are surging.

Following the game against Maryland, Indiana will be faced with a big challenge as they head to Madison to take on the highly-touted Wisconsin Badgers.

Anunoby spent two seasons in Bloomington from 2015-17. As a sophomore, he was averaging 11.1 points, 5.4 rebounds and 1.3 blocks per game before suffering a season-ending injury in January of that year.

Anunoby was then selected as the 23rd pick of the 2017 NBA Draft by the Raptors. In 2019, he won an NBA championship along with Kawhi Leonard. Last season was his best statistical performance of his career as he averaged 10.6 points, 5.3 rebounds and 1.4 steals per game.

“OG is the epitome of the skilled, powerful, determined player we want in our organization long term. Remember, he doesn’t shoot to miss,” general manager Bobby Webster said. “We’re really pleased that OG will be with us for seasons to come.”

Class of 2021 five-star shooting guard and Indiana target Aminu Mohammed announced his commitment to Georgetown Monday evening. Over the last two months, Indiana has missed out on three big time recruits in the 2021 class in Trey Kaufman, Mason Miller and now Mohammed.

Mohammed picked Georgetown over IU, DePaul, Kansas State and Georgia. The 6-foot 5-inch wing is ranked as the No. 16 player in the nation and averaged 34.8 points, 15.7 rebounds and 3.6 assists last season.

“For the basketball part, it’s just how they’re going to be able to use me and their style of play: in transition, if they can trust me to lead a team, to be able to coach me up,” Mohammed told Inside the Hall this fall. “Tell me my mistakes, teach me stuff, work on my mental part of the game, break down film.”

Indiana recently earned the commitment from UT-Martin graduate transfer Parker Stewart. However, it’s still uncertain whether he will play this season or wait until next year. The Hoosiers will also bring in center Logan Duncomb in the 2021 class. As of right now, there aren’t any other major recruiting targets for Miller in the upcoming class.

As expected, Indiana Football was shut out of the New Year’s Six much to the consternation of Hoosier fans. Also, Women’s basketball is off to a strong start in Big Ten play, after struggling in the preseason.

• After not being selected to a New Year’s Six Bowl or even the Citrus Bowl, IU Football has to settle for the Outback Bowl against a 4-5 Ole Miss team who thrives on offense, but struggles mightily on defense. With a win, the Hoosiers would end a long bowl losing streak that dates back to 1991.