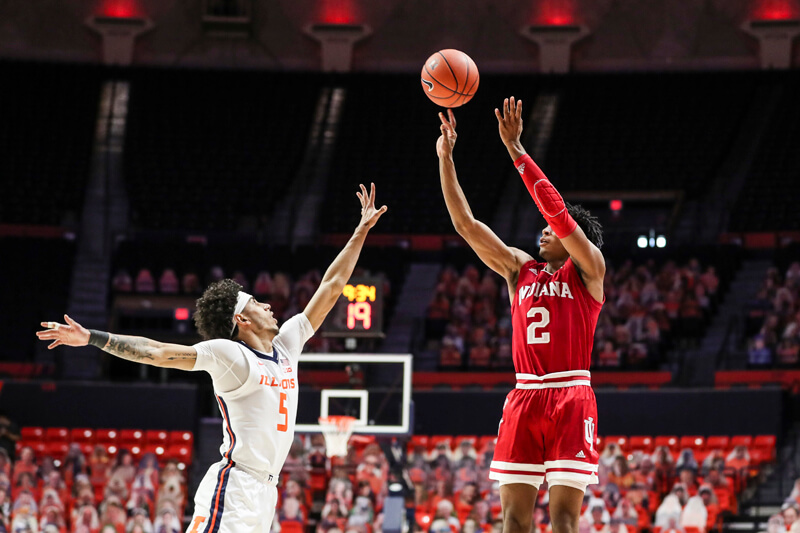 How it happened: Wednesday’s disappointing home loss to Northwestern put pressure on Indiana to respond on Saturday afternoon in Champaign. And while Indiana fell to 0-2 in Big Ten play for the first time since the 2013-14 season, it did put up a fight in hard fought loss. After a poor first half offensively for both teams that saw Illinois take a 29-27 lead into the locker room, both teams were much more sharp after intermission. The difference in this one, however, was a pair of runs led by Ayo Dosumu (30 points) that Indiana simply couldn’t match. A 14-0 spurt, which happened in part with Trayce Jackson-Davis tethered to the bench with three fouls, saw Illinois flip a 49-44 deficit to a 58-49 lead. The Hoosiers answered with a 8-2 run to draw within 60-57 with 4:10 to play. Illinois responded with the next five points to get the lead to eight with 1:46 to play and Indiana didn’t get closer than five the rest of the way.

Standout performer: Armaan Franklin was terrific for Indiana once again as the sophomore poured in 23 points on 8-of-12 shooting in 31 minutes.

Statistics that stands out: Indiana was much better in terms of taking care of the ball with just eight turnovers (12 TO%), but grabbed only three offensive rebounds and only had five second-chance points.