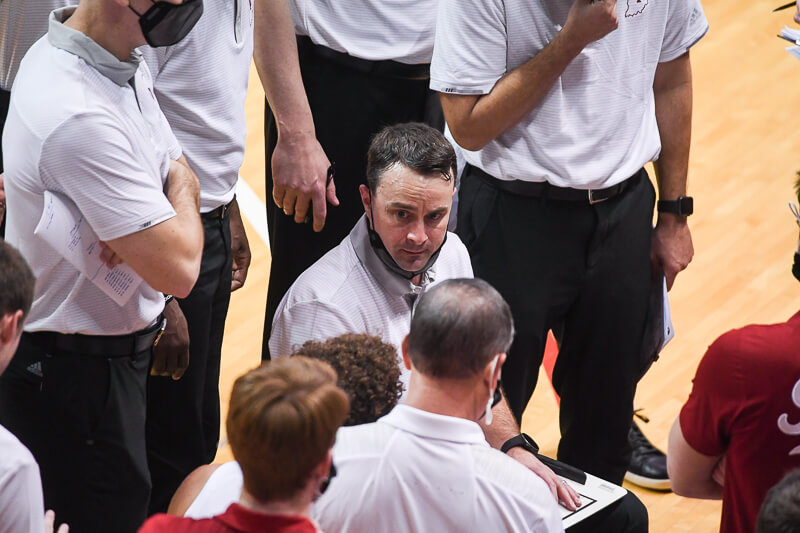 Indiana dropped its Big Ten opener 74-67 on Wednesday night to Northwestern at Assembly Hall. The Hoosiers struggled to defend Chase Audige down the stretch, had too many long scoring droughts and fell to 5-3 overall as a result.

• Another uninspired start: Indiana was able to overcome a slow start on Saturday against Butler with a second half run to put the undermanned Bulldogs away. The Hoosiers didn’t have that luxury on Wednesday against Northwestern, which was full of confidence following its 14-point win against Michigan State on Sunday.

Indiana’s start was so bad that it trailed by 15 points at the 5:31 mark of the first half in a game that Northwestern ultimately led for more than 29 minutes. This was no fluke loss as the Hoosiers were beaten thoroughly at both ends for most of the game.

“I thought we stunk on both ends of the floor,” Archie Miller said postgame. “There were a lot of breakdowns, a lot of sloppiness and it got us beat.”

Ultimately the blame begins and ends with Miller, who took full responsibility in the postgame press conference. The challenge for Miller is figuring out the slow starts and preventing them from continuing to happen. Against a Big Ten schedule that is unrelenting, the Hoosiers can’t afford to dig big holes early and expect to find success.

• Indiana provides little resistance defensively: The Hoosiers entered Wednesday’s game ranked in the top 10 nationally defensively in KenPom’s adjusted defensive efficiency. No opponent had scored more than a point per possession against IU through its first seven games.

Northwestern, however, torched Indiana inside the 3-point line by making 67.7 percent of its 2s. The Wildcats were 12-of-16 (75 percent) on dunks and layups and 9-of-15 (60 percent) on their other 2-point attempts. Indiana blocked only two shots, could not stop dribble penetration and Northwestern backup big man Ryan Young scored 13 points and grabbed four offensive rebounds in 21 minutes.

Indiana is clearly missing the depth Joey Brunk would have provided in the post if for no other reason than his absence is forcing Trayce Jackson-Davis to play huge minutes every game. Jackson-Davis logged close to 36 minutes on Wednesday and has played 34 or more minutes in four of the last five games.

• Long scoring droughts persist: Indiana’s development on offense has lagged behind the defense for the entirety of Miller’s era in Bloomington. Poor free throw and 3-point shooting have been persistent throughout Miller’s tenure and while Indiana did make close to 39 percent of its 3s on Wednesday, it shot just 62.5 percent on free throws on 16 attempts.

Wednesday’s offensive performance was familiar in that it featured several long scoring droughts. The Hoosiers had four different instances in which they went more than 2:12 of game time without a point. Two of those instances saw Indiana go scoreless for more than 3:36.

The most damaging drought came after Indiana led by four at 54-50 with 8:56 on a pair of Race Thompson free throws. Indiana didn’t score again until the 4:49 mark. By that time, Northwestern had opened an eight-point lead that it would not relinquish.

• Turnovers remain a major issue: In Miller’s first three years, he often cited 12 turnovers or fewer as a goal for his teams.

In the Northwestern loss, Jackson-Davis struggled with some of the reads he needed to make defensively and had five turnovers. Trey Galloway had four turnovers in 22 minutes off the bench. Armaan Franklin, for all of the improvement he’s shown, had three turnovers in the loss and has 16 turnovers over the last five games. The mistakes are a team-wide issue that left Miller pondering changes when he spoke about the turnover issue late Wednesday night.

“We have too many plays that are not going to work for us moving forward in this league,” Miller said. “We cannot turn the ball over 16 times at home. We cannot turn the ball over 16 times, we’re not that good. There are five or six a game right now that have to get trimmed back. Maybe we need to slow it down. We are not playing that many guys anyway and if we keep turning the ball over in transition with numbers then maybe we just have to slow it down a little bit to make sure we do not turn it over.”

• Audige, after an invisible first half, carries Northwestern down the stretch: It was a tale of two halves for Northwestern guard Chase Audige in his first Big Ten road game.

After playing just three minutes in the first half due to fouls, Audige went off in the second half at Assembly Hall. In 15 second half minutes, the William & Mary transfer shot 6-of-8 from the field and scored 17 points. It was a surprising performance from a player who totaled just 16 points in Northwestern’s previous two games against high major competition.

“I give Audige a lot of credit,” Miller explained. “In the first half he was taken out with fouls, but in the second half he was a confident guy. He came in a made some really big plays for them and some big shots.”

Indiana’s two upperclassmen guards, meanwhile, were nearly invisible offensively. Al Durham Jr. scored just two points in 36 minutes and Rob Phinisee had only four points in 23 minutes. The duo combined to shoot 1-of-9 from the floor.