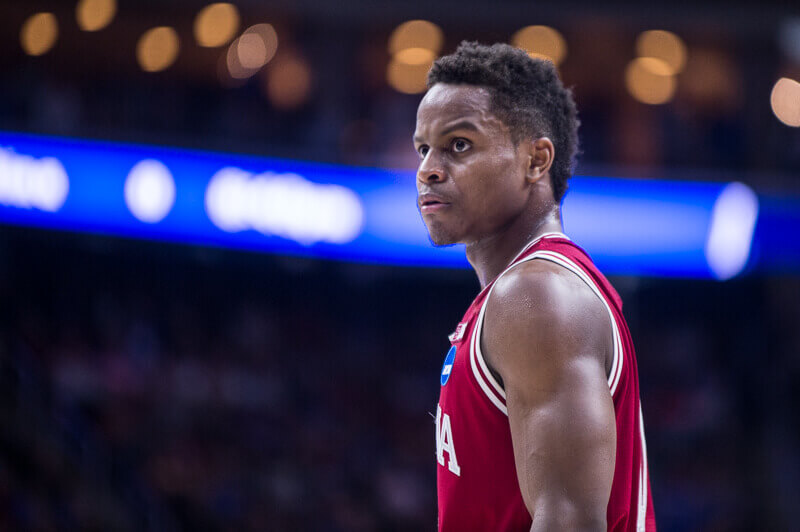 We have now reached the Elite Eight stage of the bracket for all four regions: The Pre-Knight, Knight Pre-’85, Knight Post-’85 and Post-Knight regions, representing the four periods of IU basketball history.

Earlier this week, the Sweet Sixteen matchups in each region were decided, as Monday’s voting determined the Elite Eight participants in the Pre-Knight and Knight Pre-’85 era regions, while Tuesday’s did the same in the Knight Post-’85 and Post-Knight era regions.

Voting in the Final Four will take place Friday.

No. 1 Calbert Cheaney vs. No. 2 Steve Alford

Cheaney defeated Michael Lewis in the Round of 64, AJ Guyton in the round of 32 and Alan Henderson in the Sweet 16. Cheaney’s legacy precedes him. He’s still the Big Ten’s all-time leading scorer, and therefore the leading scorer in IU history, with 2,613 career points and was a three-time All-American under Bob Knight. Postseason accolades flooded Cheaney during his IU career, as he won the Wooden and Naismith awards for national player of the year and was the Big Ten player of the year in 1993. The small forward from Evansville, Indiana, was also named to IU’s All-Century first team and was inducted last year into the National Collegiate Basketball Hall of Fame. A career 56 percent shooter from the field, Cheaney also shot 44 percent from 3-point range and scored 30 or more points an astounding 13 times. Indiana won 105 games during Cheaney’s four years as a Hoosier.

Alford defeated Andrae Patterson in the round of 64, Keith Smart in the round of 32 and Damon Bailey in the Sweet 16. A 6-2 guard, Alford’s 2,438 career points set an Indiana school record at his time of graduation. While he now must settle for second all-time on the IU scoring charts, there’s little Alford didn’t accomplish during his college career. He was part of Indiana’s last NCAA title team in 1987, the same season in which he was named a consensus first-team All-American (for the second time), a first-team All-Big Ten member (for the third time), the Big Ten player of the year (for the second time) and the Big Ten MVP. This all came after a prestigious high school career at New Castle in Indiana (Alford was the 1983 Indiana Mr. Basketball) and after he won the gold medal with the United States in the 1984 Olympics. Alford also has the IU record for career steals in Big Ten games (99).

Ferrell defeated Troy Williams in the tound of 64, Christian Watford in the round of 32 and Jared Jeffries in the Sweet 16. A top recruit at point guard for the Hoosiers, Ferrell was a first-team All-Big Ten player in 2015 and 2016. A member of the 2013 Big Ten all-freshman team, then 2016 Big Ten all-defensive team and an All-American selection, Ferrell started and ended his IU career by winning the Big Ten regular season title twice and reaching the Sweet Sixteen of the NCAA tournament twice. He started all 137 games of his Indiana career, averaged 14.5 points and 4.6 assists per game for his career and had 114 career steals. Ferrell is sixth all-time in scoring at IU with 1,986 points and is the program’s all-time assists leader with 633. He also has the most made 3-pointers in Big Ten play (159) among all Hoosiers.

Oladipo defeated Dane Fife in the round of 64, Jordan Hulls in the round of 32 and Cody Zeller in the Sweet 16. A terrific ball handler and tenacious defender while playing at shooting guard, Oladipo rose from a bench player to a superstar with the Hoosiers, closing his college career by being named a first-team All-Big Ten selection, the Big Ten defensive player of the year, first-team All-American and the Sporting News national player of the year. Oladipo scored 1,235 points in his IU career, one that culminated with a Big Ten title and consecutive appearances in the Sweet Sixteen of the NCAA Tournament. Oladipo, third in IU history with 161 steals and a player shot 53.8 percent for his college career, is one of the most popular IU players in recent history and now plays for the Indiana Pacers after being selected second overall by the Orlando Magic in the 2013 NBA draft.