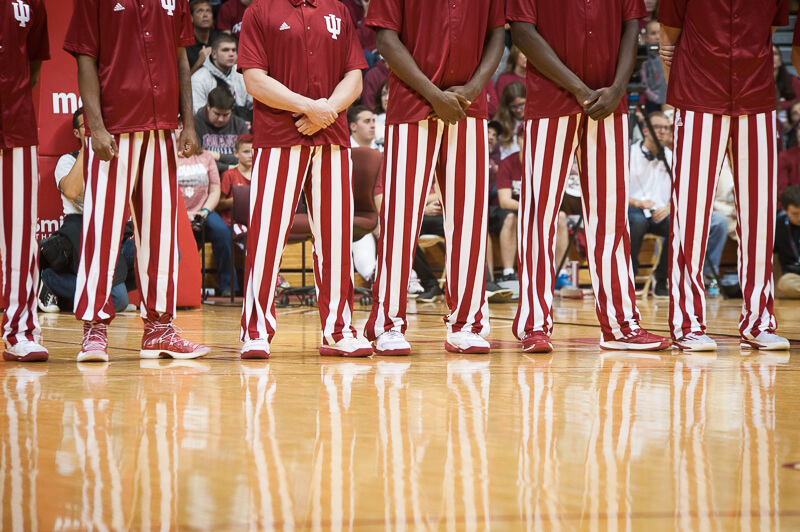 Welcome everybody to the “Greatest IU Basketball Player of All-Time” tournament bracket, where Inside the Hall and Assembly Call teamed up to put together a field of 68 former Hoosiers who have left a tremendous impact on the Indiana basketball program.

Just like an NCAA tournament bracket, the field is split up into four different regions. We divided the four “regions” into time periods to keep things organized. The time periods are as follows:

There are 17 players from each time period, with each 16 seed being determined via a play-in game. Players will advance in the bracket based on votes from all of you, the Hoosier fans.

We will release a Twitter poll on Inside the Hall’s Twitter account with the matchups, and you will have 24 hours to vote for whoever you think should advance, bringing them one step closer to being crowned The Greatest IU Basketball Player of All-Time.

It should be noted that we decided not to include any current players in this bracket because their careers have not yet concluded.

Each day there are matchups, a post will appear on Inside the Hall, providing brief backgrounds on the individuals, just in case you need a refresher on some of the great things they did in their careers.

So, let’s get started. Today will feature all four play-in games from each region. Below you will find the aforementioned descriptions of the individuals competing today, as well as the time their respective matchups will be posted on Twitter for voting to begin. Again, you have 24 hours from the time the poll is created (the time listed) to vote for the winner.

One more thing, the full bracket is shown at the bottom of this page. It will be updated as the tournament progresses. After today’s play-in games, we will continue with the first day of the Round of 64 on Monday.

Today’s play-in matchups are below:

Watson was a two-sport athlete who played both baseball and basketball at Indiana, before later going on to coach basketball at the school. A native of Jeffersonville, Indiana, he was IU’s Most Valuable Player in basketball in both 1949 and 1950, and earned first team All-Big Ten and All-American honors in 1950. When Watson finished his collegiate career, he was Indiana’s all-time leading scorer with 757 points. He was inducted into the Indiana University Athletics Hall of Fame in 1990.

A three-sport athlete who played baseball, basketball and football at Indiana, Huffman served as captain of the 1937 IU basketball team. Huffman was part of the 1936 team which finished the regular season as Big Ten co-champions, and he earned first team All-Big Ten and All-American honors for basketball that season. Huffman was a recipient of the Big Ten Medal of Honor and he was inducted into the Indiana University Athletics Hall of Fame in 1982.

Thomas served as the sixth man on Indiana’s 1981 National Championship team. Thomas’ role became pivotal in the title game against North Carolina after Ted Kitchel got into foul trouble. So, Thomas entered the game and snatched nine rebounds, which helped Indiana secure the 63-50 victory. His performance also made him a member of the 1981 Final Four All-tournament team. Thomas played at Indiana from 1979-83, then he played seven years in the NBA before taking up coaching, where he served briefly as an assistant at Indiana.

Ritter, a native of Goshen, Indiana, stayed home for college to play for the Hoosiers from 1970-73. Over the course of his three years he saw his point production increase, averaging 6.8 points per game his first year, 14 in year two and 14.7 in his final year. After a first-round exit in the NIT in 1972, Ritter and the Hoosiers bounced back the following year and won the Big Ten, then advanced to the Final Four of the NCAA tournament in 1973. Unfortunately, they lost to UCLA in the Final Four as the Bruins went on to win their seventh straight national title.

Lewis was one of the final point guards to play for Bob Knight at Indiana, and closed his IU career by topping the Big Ten during the 1999-2000 season in average assists per game (5.3) and true shooting percentage (63.5 percent). The Jasper, Indiana, native led the Hoosiers in assists for three consecutive seasons from 1998 to 2000, and at the end of his career he owned the IU record for career assists with 545 (he has since been passed by Yogi Ferrell). Lewis is tied with Keith Smart for the most assists in a single game for IU (15) and he remains the program leader in career assists in Big Ten games (325).

From Floyd Knobs, Indiana, Graham was named the state’s Mr. Basketball in 1989 before arriving in Bloomington. Injuries, in particular a recurring broken foot that forced him to redshirt a season, slowed his IU career, but he still appeared in 104 collegiate games and averaged almost 12 points per game for the 1993-94 team that reached the Sweet Sixteen. A valued swingman for the Hoosiers, Graham was a career 48 percent 3-point shooter (the third-best percentage in program history) who helped contribute to a pair of regular season Big Ten titles in 1991 and 1993. Graham shot 56.9 percent from 3-point range during the 1993-94 season, still the IU record for single-season 3-point field goal percentage. During the 1990-91 season, Graham made 38 consecutive free throws.

Williams came to Indiana and was instantly thrown into the fire, starting all 32 games his freshman year in 2013. He averaged 7.3 points and 4.4 rebounds and was named Big Ten freshman of the week at one point in the season. In his sophomore season his points raised to 13 per game and rebounds to 7.4 while he was named Big Ten and national player of the week in December. Williams almost left for the NBA after his second season at Indiana, but he came back for one more ride his junior year. His athletic ability helped Indiana win the Big Ten outright and advance to the Sweet Sixteen of the NCAA tournament, knocking off Kentucky in the round of 32. Williams earned third team All-Big Ten that year. He then moved on to the NBA for three years until moving to Italy to continue his professional career.

Langford’s arrival to Indiana was met with unparalleled anticipation and excitement. Coming from New Albany High School and being named 2018 Indiana Mr. Basketball, Langford was one of, if not the biggest step for Archie Miller since arriving at IU in 2017. Langford finished his freshman season averaging 16.5 points per game and 5.4 rebounds. He led all Big Ten freshmen in scoring and was fifth nationally in freshmen scoring. Although the team just missed the NCAA tournament, Langford’s role in rebuilding the program after the Tom Crean era is second to none. Langford moved on after his freshman year and got drafted 14th overall by the Boston Celtics in the 2019 NBA Draft.

(Note: A higher resolution version of the bracket is available here.) 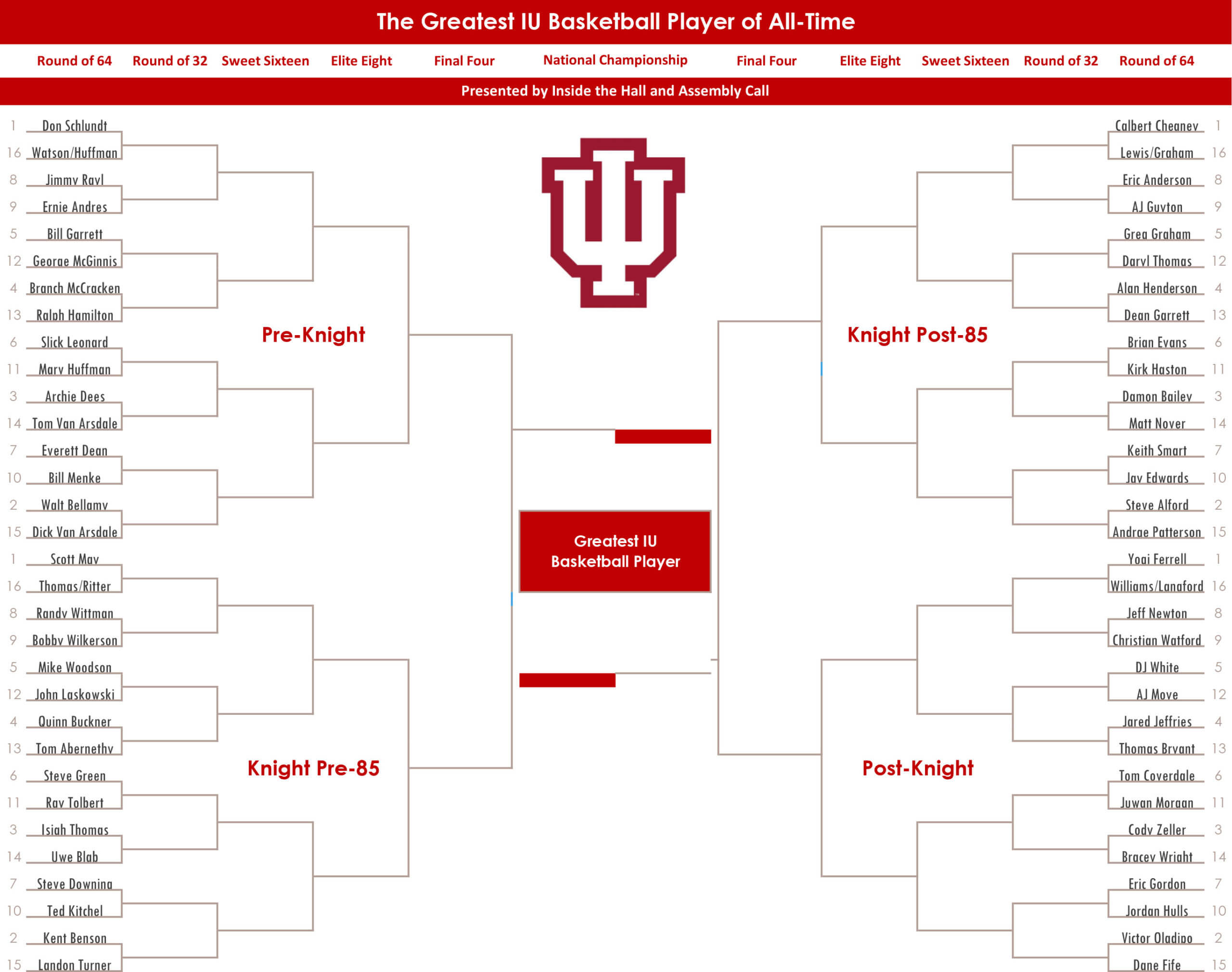