The Greatest IU Basketball Player of All-Time Bracket: Knight Pre-’85 Round of 32 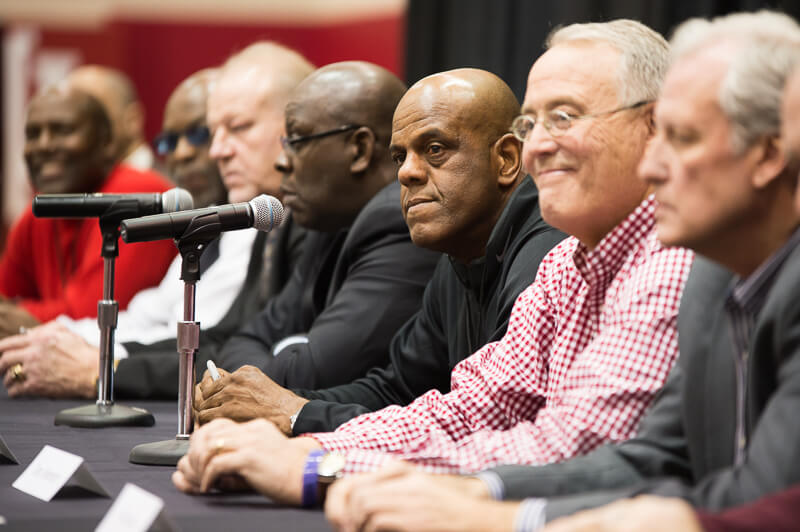 Remember, go to Inside the Hall’s Twitter account to vote on these matchups (the polls will also be embedded in this post once they go live), and you have 24 hours from when the polls go live to vote. The Knight Post-’85 era region Round of 32 will take place tomorrow. (The updated bracket can be found at the bottom of the article.)

May defeated Jim Thomas in the round of 64. May was a standout player on some of the best teams in Indiana history. The forward was an integral part of the 1976 undefeated Indiana team which won the title after going 32-0, and he was recognized handsomely for his contributions. May averaged 23.5 points per game, 7.7 rebounds per game and shot 52.7 percent from the field during that championship season. He was named the NABC, Naismith, AP, Helms Foundation, Rupp and Sporting News national player of the year that season. A consensus All-American in both 1975 and 1976, May finished his IU career with 1,593 points (13th in IU history) and was drafted second overall in 1976 by the Chicago Bulls. He also won a gold medal with the United States in the 1976 Summer Olympics.

Wittman defeated Bobby Wilkerson in the round of 64. A three-year starter at guard for the Hoosiers, Wittman averaged better than 23 points per game and won three Big Ten titles with Indiana, including the 1981 national championship. Another former Indiana player in both the Indiana Basketball Hall of Fame and the Indiana University Athletics Hall of Fame, Wittman was named on three occasions as a first team All-Big Ten player who, at the time of graduation, ranked eighth on the career scoring list (1,549), second on the career assists list (432) and third on the career steals list (128). Wittman was drafted in the first round of the 1983 NBA Draft and also enjoyed a long coaching career in the NBA.

Woodson defeated John Laskowski in the round of 64. A high school All-American at Broad Ripple High School in Indianapolis, Woodson remains the fifth-leading scorer in Indiana history with 2,061 points. A NIT all-tournament team selection, a gold medalist at the Pan American Games, a Big Ten MVP and a two-time collegiate All-American during his college career, Woodson averaged nearly 20 points per game across 104 appearances for the Hoosiers. A career 50.5 percent shooter from the field, Woodson made the 1979 All-Big Ten team but never truly got to display his skills on the NCAA tournament stage, going 2-2 in the Big Dance across two appearances. A first-round NBA draft pick, Woodson also had a healthy coaching career in the NBA from 1996 to 2018.

Buckner defeated Tom Abernethy in the Round of 64. Buckner had a colorful athletic career in Bloomington, playing both basketball and football and getting drafted professionally in both sports. But it’s his contributions to the 1976 title team on the hardwood that is most remembered. He made an immediate impact as a freshman, averaging 10.8 points and nearly five rebounds per game as the Hoosiers reached the Final Four. He turned into a facilitator for his sophomore campaign, averaging 5.4 assists per game, and his junior season saw the best collegiate stats of his career as Buckner averaged 11.8 points, 3.8 rebounds and 5.5 assists per game. Buckner brought a strong sense of defense to the title-winning team, but also finished as IU’s fourth-leading scorer on that team with 8.9 points per game. He owns the rare distinction of winning a high school state title (in Illinois), a college title (at IU), an Olympic gold medal (with the United States) and an NBA title (with the Boston Celtics).

Tolbert defeated Steve Green in the round of 64. Tolbert was Indiana’s starting center every year that he played. Standing at 6-foot-9, Tolbert helped IU secure two Big Ten championships and the National Championship in 1981. He was also a gold medalist on the U.S. 1979 Pan American team. Tolbert was the 1981 Big Ten, as well as IU, MVP. As the leading team rebounder in all four of his seasons with the Hoosiers, he still ranks in the top 20 on IU’s career scoring list with 1,427 points and sixth in rebounds with 874.

Thomas defeated Uwe Blab in the round of 64. The catalyst for Indiana’s 1981 national title and eventual No. 2 overall pick in the NBA Draft and 12-time NBA All-Star, Thomas made the most of his two seasons in Bloomington. As a freshman Thomas led Indiana in scoring (423 points), assists (159) and steals (62) while becoming the first freshman to be named to the AP All-Big Ten team. He was a captain of the 1980-81 team as a sophomore, improving his final statistical averages to 15.4 points per game, 5.7 assists per game and 3.5 rebounds per game as the Hoosiers went 26-9 and defeated North Carolina for the college championship. Thomas went on to win two NBA titles with the Detroit Pistons and spent time as the coach of the Indiana Pacers.

Downing defeated Ted Kitchel in the round of 64. A first-round draft pick in the 1973 NBA draft, Downing remains one of the most athletic centers to ever wear the cream and crimson. His all-time statistics of 1,220 points (36th in program history) and 889 rebounds (5th in program history) have stood the test of time. He was an All-American in 1973, the same season in which Indiana reached the Final Four, and Downing was also the choice for Big Ten MVP in 1973. Downing averaged better than 17 points and 10 rebounds per game for his final two seasons and is a member of the Indiana High School Basketball and Indiana University Athletic halls of fame.

Benson defeated Landon Turner in the round of 64. Recent health problems have plagued the 6-foot-10 Benson, who will be forever remembered for his role on the 1975-1976 title-winning Hoosiers. Benson arrived at IU after a storied career at New Castle High School, where he scored nearly 1,500 points, had almost 1,600 rebounds and was named Indiana’s Mr. Basketball in 1973. As a sophomore, Benson and the 1974-1975 Hoosiers reached the Elite Eight, and one year later Benson was an All-American and was named the Most Outstanding Player of the Final Four when the Hoosiers won the NCAA title (Benson scored 25 points in the championship game). He ended his IU career with 1,740 points, still ninth in school history, and was the No. 1 overall pick in the 1977 NBA Draft. 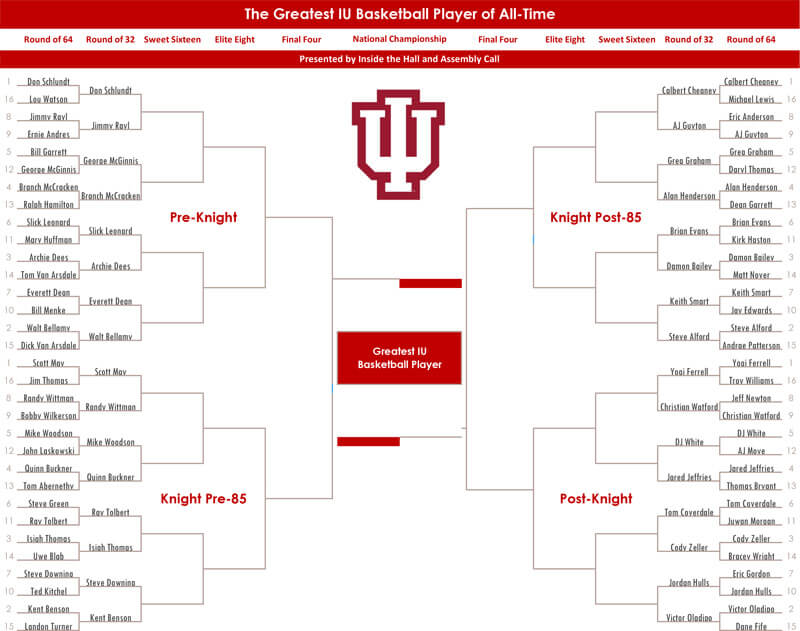