The Greatest IU Basketball Player of All-Time Bracket: Knight-Post ’85 Round of 64 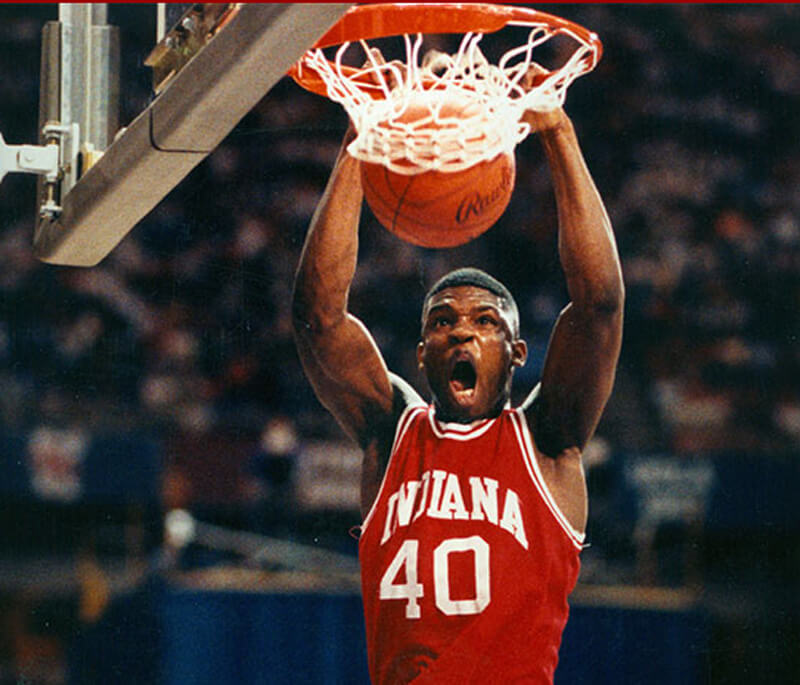 Remember, go to Inside the Hall’s Twitter account to vote on these matchups (the polls will also be embedded in this post once they go live), and you have 24 hours from when the polls go live to vote. The Round of 64 for the Post-Knight era region will take place tomorrow. (The updated bracket can be found at the bottom of the article.)

Cheaney’s legacy precedes him. He’s still the Big Ten’s all-time leading scorer, and therefore the leading scorer in IU history, with 2,613 career points and was a three-time All-American under Bob Knight. Postseason accolades flooded Cheaney during his IU career, as he won the Wooden and Naismith awards for National Player of the Year and was the Big Ten Player of the Year in 1993. The small forward from Evansville, Indiana, was also named to IU’s All-Century first team and was inducted last year into the National Collegiate Basketball Hall of Fame. A career 56 percent shooter from the field, Cheaney also shot 44 percent from 3-point range and scored 30 or more points an astounding 13 times. Indiana won 105 games during Cheaney’s four years as a Hoosier.

Lewis defeated Pat Graham in the play-in game. He was one of the final point guards to play for Bob Knight at Indiana, and closed his IU career by topping the Big Ten during the 1999-2000 season in average assists per game (5.3) and true shooting percentage (63.5 percent). The Jasper, Indiana, native led the Hoosiers in assists for three consecutive seasons from 1998 to 2000, and at the end of his career he owned the IU record for career assists with 545 (he has since been passed by Yogi Ferrell). Lewis is tied with Keith Smart for the most assists in a single game for IU (15) and he remains the program leader in career assists in Big Ten games (325).

A power forward from Chicago, Anderson (who died in 2018) was the 1989 Big Ten freshman of the year and a 1991 first-team All-Big Ten selection. He was inducted posthumously into the IU Athletics Hall of Fame in 2019. Anderson won a pair of Big Ten titles in 1989 and 1991 with the Hoosiers, and reached two Sweet Sixteens and a Final Four. Anderson led the Hoosiers in rebounding in each of his final three seasons, and finished his career with 826 rebounds overall (eighth in IU history) and 466 rebounds in Big Ten games (fifth in IU history). Anderson’s 1,715 career points are 11th all-time on IU’s scoring list.

In Guyton’s first season at Indiana, he became just the second Hoosier freshman to collect at least 400 points, 100 assists and 100 steals. The only other IU freshman to do that was Isiah Thomas. He was a four-year starter and played in every game for the cream and crimson. When he left Indiana, he was the Hoosiers’ all-time leader in 3-point makes with 283, fourth in all-time scoring with 2,100 points, eighth in assists with 403 and tenth in steals with 128. His senior season, he averaged 19.7 points per game and once said, “I felt back then I couldn’t be guarded.” Guyton was inducted into the IU Athletics Hall of Fame in 2014.

A guard for Indiana who was a key part of the 1992 Final Four team, Graham totaled nearly 1,600 points during his college career. Most of Graham’s accolades came during his senior season, in which he was named first-team All-Big Ten, the Big Ten defensive player of the year and an NCAA tournament All-Region selection. Graham won a pair of Big Ten titles at Indiana, and grew to be an effective 3-point shooter (career 43.9 percent shooter from distance) who is also fourth in IU history with 151 career steals. Graham was taken in the first round of the 1993 NBA Draft by the Charlotte Hornets.

Thomas was a starter under coach Knight for all four years he competed in the cream and crimson. He scored 1,095 career points during his time with the Hoosiers, but it was one play that potentially defined Thomas’ career. He was co-captain on IU when the Hoosiers won the title in 1987, and he scored 20 points in that championship game. But it was his pass to Keith Smart at the end of the game that allowed Smart to hit a buzzer-beating 3-pointer to defeat Syracuse by one. Knight called Thomas’ pass, “the greatest single play I ever had a kid make.”

Another prolific scorer from the early ’90s, the 6-foot-9 Henderson finished his Hoosier career with 1,979 career points, still seventh all-time on IU’s scoring charts. Henderson’s 23.5 points per game as a senior in the 1994-95 season represents the highest single-season per game scoring total from Bob Knight’s time as head coach. Among IU players since 1971, Henderson has the most single-season points in Big Ten play (416 points during that 1994-95 campaign). All four of Henderson’s Hoosier teams reached the NCAA tournament, and the 1992-93 squad won the Big Ten and was the last IU team to win more than 30 games in a season. Henderson averaged a double-double during his final two seasons at Indiana.

Garrett played at the Community College of San Francisco before getting offered a scholarship by Bob Knight to join Indiana. In his first season with the Hoosiers, they went to the national championship and defeated Syracuse in 1987. Garrett was named Big Ten rookie of the year that season after averaging 11.4 points and 8.5 rebounds per game. In his second and final season at IU, he averaged 16.1 points per game and was awarded as a first team All-Big Ten selection. He ranked first in the conference in total rebounds with 246 and total blocks with 99. For his Indiana career, Garret ranks 16th in the conference in career blocks with 192.

A 6-foot-8 power forward who was recently inducted into the Indiana Basketball Hall of Fame in 2018, Evans shined in Bloomington, especially at the end of his career. He was a third-team All-American and the Big Ten player of the year in 1996 after averaging 21.2 points per game as a senior. Evans ended his Indiana career with 1,701 points and 750 rebounds, as he recorded at least 138 rebounds in all four of his seasons. Evans was a bit shortchanged in terms of NCAA tournament runs at the end of his career though, as the Hoosiers lost in the first round of both the 1995 and 1996 NCAA tournaments.

Haston played under Bob Knight to begin his career and then Mike Davis to end his career. Haston led the Big Ten in scoring during his final season at Indiana, averaging 19 points per game that season. Haston’s Hoosier career is probably most remembered for his buzzer-beating 3-point shot that beat defending champion and top-ranked Michigan State 59-58 in Assembly Hall in 2001. Ironically enough, Haston had only attempted two 3-point shots during his first two years at IU. Then in his final season, he went 26-for-71 from beyond the arc, including that momentous game-winner to knock off the Spartans.

The fanfare surrounding Bailey’s arrival at Indiana was unprecedented and he lived up to the hype in college as well. After scoring 3,134 points at Bedford North Lawrence High School (still the boys’ high school basketball record in Indiana), he scored 1,741 points with the Hoosiers (eighth all-time on the IU scoring charts). An Indiana Basketball Hall of Fame member, Bailey was named the 1991 Big Ten freshman of the year after averaging 11.4 points per game and as a senior he received third-team All-American honors after averaging 19.6 points per game. Indiana made it to at least the Sweet Sixteen in each of Bailey’s four seasons, and Indiana won two Big Ten titles during the same period.

Nover saw a steady increase in production during his career at Indiana. He went from averaging 5.3 points and 3.4 rebounds during his freshman season to 11 points and 5.9 rebounds in his senior season. As a 6-foot-9 big man from Chesterton, Indiana, Nover helped the Hoosiers make deep postseason runs each season. This included reaching a Sweet Sixteen in 1991, a Final Four in 1992 and an Elite Eight in 1993.

Few players are connected to a single moment in Indiana athletics history as Smart is to “The Shot.” His winning jumper to lift IU past Syracuse in the 1987 NCAA title game is an indelible moment for all Hoosier fans, but it’s important to remember Smart was a skilled player throughout his two years at Indiana. Smart transferred to IU from Garden City Community College in Kansas, and averaged more than 11 points and three assists per game in both of his seasons at Indiana, and he shot better than 84 percent from the foul line in both seasons as well. Smart parlayed this success into becoming a second round pick in the 1988 NBA Draft by the Golden State Warriors, and he later was the head coach of the Sacramento Kings.

Coming out of high school in Marion, Indiana, Edwards shared the Indiana Mr. Basketball Award with future IU teammate Lyndon Jones. In high school, he was given the nickname “Silk” for his smooth jump shot, and it carried over to IU. Edwards was the Big Ten freshman of the year in 1988, and in his sophomore year, he averaged 20 points per game as Indiana won the Big Ten title. He was an All-American in 1989 and once held the school record for 20 consecutive games with a 3-pointer. Edwards continues to hold the NCAA freshman single-season record for 3-point field goal shooting percentage at 53.6.

A 6-foot-2 guard, Alford’s 2,438 career points set an Indiana school record at his time of graduation. While he now must settle for second all-time on the IU scoring charts, there’s little Alford didn’t accomplish during his college career. He was part of Indiana’s last NCAA title team in 1987, the same season in which he was named a consensus first-team All-American (for the second time), a first-team All-Big Ten member (for the third time), the Big Ten player of the year (for the second time) and the Big Ten MVP. This all came after a prestigious high school career at New Castle in Indiana (Alford was the 1983 Indiana Mr. Basketball) and after he won the gold medal with the United States in the 1984 Olympics. Alford also has the IU record for career steals in Big Ten games (99).

Patterson helped Indiana reach the NCAA tournament all four years he played for the cream and crimson. Unfortunately, the Hoosiers never advanced past the first round in his first three seasons, and they got to the round of 32 in Patterson’s final year. Patterson averaged over 10 points per game in three of his four seasons at IU. Patterson has some incredible individual performances that Indiana fans will remember for a long time, including a buzzer-beater to defeat Evansville in the semifinals of the preseason NIT. Then, two days later, he scored 39 points on Duke to give IU the NIT title. 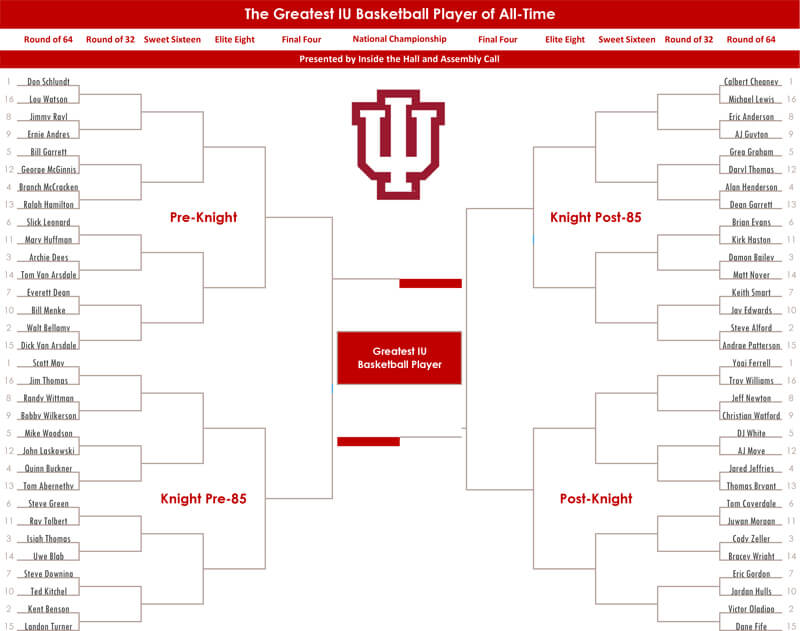