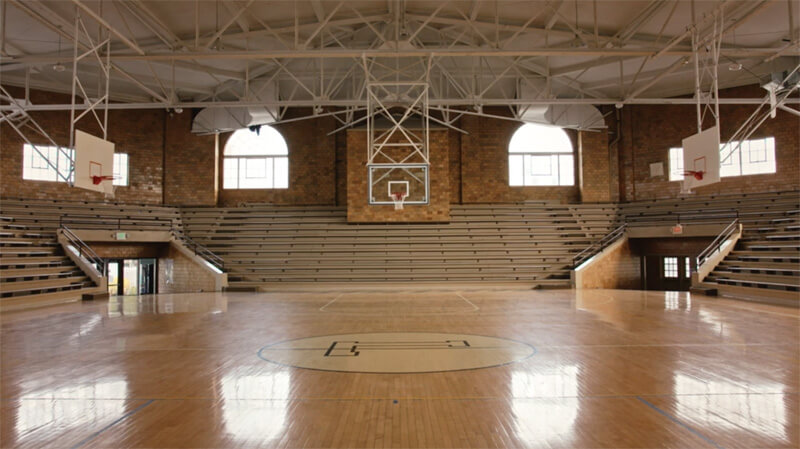 Kurtis Crabtree knows how to get the perfect Instagram picture.

As a property manager at The Flats of Lebanon luxury apartment complex in Lebanon, he has access to the gym after hours.

Friday nights offer a prime chance for him to display his photography skills.

He turns off most of the lights, only leaving on the ones that shine on the mural adorning the wall at one end of the gym, the end with “INDIANA” written across the baseline.

Crabtree bends low, capturing a “sanctuary-looking shot” of the painting.

Memory Hall in Lebanon has changed hands plenty of times over the years, from being part of a senior housing complex to a brief stint as a fitness center.

All the while, the gym offered reminders of what it once was, especially to those like Crabtree who once played inside it.

“I would just remember like early-morning games and stuff, the sun coming in (through) these huge pane windows on both sides,” Crabtree said. “Sunrise and sunset you get that opposite light coming in, so that’s just one thing that kinda stuck with me is the lighting.”

“When you walk in, it’s almost like walking into a church.”

The first came with the inception of the official high school game in Indiana.

Lebanon made the first state title game in 1911, losing 24-17 to Crawfordsville. The Tigers won the title the next year, topping Franklin by 40 points in the championship game.

In fact, the first eight Indiana boys’ basketball state champions all came from within a three-county, 30-mile radius of Lebanon, with Lebanon High School itself winning the state title in 1912, 1917 and 1918.

The result of this success was a new gym.

Memory Hall was built in 1931, and served the Tigers as their high school home until 1968.

Then known as Memorial Gymnasium, the 2,200 seat facility lasted long enough to host the renaissance of Lebanon basketball, a rebirth brought on by Rick “The Rocket” Mount.

Stories about Mount are legendary, and sometimes seem to supersede belief.

Mount was named Indiana Mr. Basketball as a senior, and also received the honor of being named the USA Basketball Yearbook Player of the Year.

His main claim to fame, the one that still outweighs his three All-American honors at Purdue and his career in the American Basketball Association, remains being the first high school athlete on the cover of Sports Illustrated in February 1966.

The gym was witness to it all: Mount’s meteoric rise and the accompanying attention placed on the city.

Soon after Mount’s departure for college, it was ensured that a player like him would never touch the Memorial Gymnasium court again.

The high school changed locations in 1968, and with that came another new gym.

“Like most towns, we just grew,” Crabtree, who was born in Lebanon, graduated from the high school and returned to the city after graduating from college, said.

“Basketball in Lebanon is just… when the basketball team is going, there’s no place like it.”

When the high school games left, the property remained under the ownership of the city. Maintenance costs eventually took their toll after some use by the Lebanon Parks and Recreation Department and the local YMCA.

The building was vacated in 1988, remaining empty until it was purchased by an Indianapolis developer who converted the classroom component of it into apartments intended for senior citizens.

Now known as Memory Hall, the gym was still the property of the city, but it was also leased to the developer for just $1 a year.

By 2012 the building was acquired by Fannie Mae after financial difficulties befell the developer.

Now the Flats of Lebanon exist, marketed as “exclusive luxury apartments” in the downtown part of the city.

The gym, of course, is still there.

Throughout the ownership changes, it remained culturally relevant.

The gym stood in for the Jasper gym in the film, and was the site for the imagined Regional Final between Hickory and Linton, in which the Hickory manager Ollie makes two underhand free throws to send the Huskers to the state finals.

This moment in movie history is a frequent talking point for Crabtree when he gives potential tenants a tour of the gym.

“When I show the apartments now, I always mention that (the Hoosiers connection) if they have any interest in sports at all,” Crabtreee said. “Down in the basement where you can get in the gym, the backway by the old locker rooms, there’s some stills of the movie ‘Hoosiers’ from that regional game. It gets brought up all the time and that’s one of the claims to fame for it.”

Crabtree holds his own personal memories of the gym, ones created not from past anecdotes but rather his own blood and sweat.

He began playing inside Memory Hall in middle school, back when it was known as Lebanon Sports and Fitness, around the turn of the century. Soon enough he was playing AAU games in the building, getting a taste for the atmosphere that used to surround Lebanon games.

“When I started this job as an apartment manager, it just kind of brought back all those memories,” Crabtree said. “When I walked in and just the smell, it smelled like suicide (drills) to be honest.”

There were still chances for Memory Hall to rekindle the magic of years’ past.

Lebanon began having its annual Black and Gold scrimmage before the season inside the gym. Crabtree remembers these games being “packed.”

Throwback games were also played, including in February 2012 between Lebanon and Rossville.

But now the activity inside it is largely recreational. Requests for commercials to be shot inside Memory Hall are common, as are students asking to take senior pictures in front of the mural.

Opportunities to educate the public about the gym still come through these endeavors.

“Everybody should know the historical importance of this and protect it,” Crabtree said. “I think in Lebanon with how important basketball is, I think that’s something parents do instinctively, is pass down stories and there’s just that great importance of it to the town.”

The pale-brick interior walls will continue to encase basketball history, the kind only found in Indiana.

“I think here as Hoosiers, we take pride in basketball (being) from Indiana,” Crabtree said. “(The) University of Kansas, they can try to lay claim to it, or New York can say it’s the home of basketball.

‘I don’t think in any other part of the country there’s anything more important, as far as basketball, as it is here.”

Memory Hall is featured once in the 2019-20 Indiana men’s basketball introduction video at the 0:44 mark. The video can be seen here.