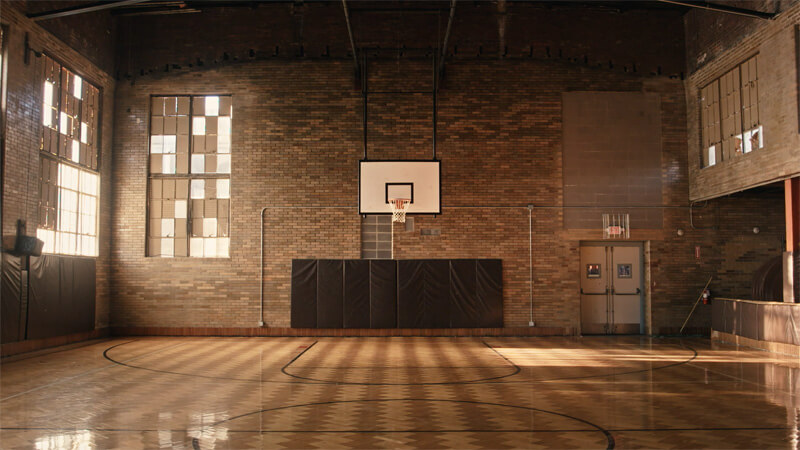 The mission of the Harrison Center, located squarely in between the Old Northside and Herron Morton neighborhoods in Indianapolis, is straightforward.

According to Molly Kelley, a staff member who joined the Harrison Center last summer, the center tries to get those who pass through its doors, and consequently its art galleries and events, to engage with the Indianapolis art scene in a non-intimidating way.

But of late, it’s the building’s gym which has allowed more people to note the purpose of the organization.

The building the Harrison Center is housed within on North Delaware Street was built in 1903. It was built by The First Presbyterian Congregation, and former President Benjamin Harrison was a Sunday school teacher in the church.

Fast-forward 24 years and a space for gathering and recreation was needed, so a gym was constructed. Community groups like the Boy Scouts met in the space too, and various other community services were located in the building, even after the congregation dissolved during the 1970s.

The presence of other church groups still failed to keep the building up to code, though. Neglected maintenance had taken its toll, and by the late 1990s the building had fallen into disrepair.

The space was cleaned up and tenants like the Herron School of Art and the Redeemer Presbyterian Church moved in.

There are six art galleries in the building, space for more than 30 artist studios and three different organizations currently call the building home.

The gym sees plenty of use as well.

Herron High School (opened in fall 2006 in the building’s basement before moving two blocks away in fall 2007) and the aforementioned Redeemer Presbyterian Church both use the gym for activities.

Community basketball events are also organized in the historic gym, which features a herringbone flooring pattern on the court.

Plenty of Harrison Center events, like the Independent Music + Art Festival, as well as weddings, also take place inside the gym.

As the Harrison Center’s largest event space, the gym finds itself as a versatile area, especially given the hardwood floor space offered by the basketball court and the wooden bleachers that can be used for seating.

This versatility is reflected in the history of what the gym has housed.

Wedding receptions and birthday parties have taken place along with bicycle polo matches and fashion shows.

Of course, basketball games are also a part of the 1920s-era gym’s legacy.

The Harrison Center even had a rap recorded to chronicle the gym’s history in December 2016.

Kelley said historic elements from the gym have been preserved to retain the facility’s “nostalgic and vintage look.” This is what makes it an appealing destination for videos and photoshoots, including ones done by the Indianapolis Motor Speedway, the Indiana Pacers and the Indianapolis Colts.

The Indiana men’s basketball program’s choice to feature the Harrison Center gym in this year’s introduction video added to that tradition.

The gym appears twice in the video.

First there’s a close-up of the herringbone floor with a crisp black line cutting through it.

Second there’s a wide shot of the gym. Light filtering in from the outside reflects off the alternating light and dark wood in the herringbone flooring, and a light brick wall in the background further intensifies the glow.

The differing events held in the gym, as well as the way light can be manipulated as it passes through its windows, lends an artistic quality to the gym.

Even the bleachers, located on only one side and painted orange and blue with orange pillars behind a short brick wall, reflect a creative pop of color in an otherwise uniform tan environment.

It’s something that fits what Kelley said was the hopeful impact of the gym’s inclusion in the video: To promote state culture and to increase interest in the arts.

The Harrison Center is featured twice in the 2019-20 Indiana men’s basketball introduction video at the 0:32 (flooring) and 0:39 (court and wall) marks. The video can be seen here.

Filed to: State of Basketball, The Harrison Center