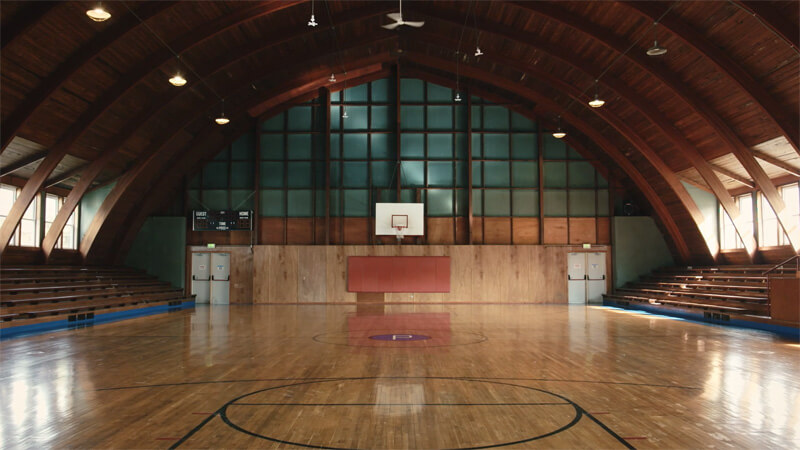 When a first-time visitor walks onto the court at the Pleasantville Gym in Pleasantville, Indiana, Lonnie Todd knows exactly what they’ll do.

Like everyone else, his favorite part of the gym, which was built in 1954, is the ceiling.

High-arching, dark wooden trusses soar into the sky, creating a distinct environment for the quaint facility, which has just five rows of bleachers running alongside each sideline.

As such, when Todd sees people walk through the door and onto the gym floor, he knows exactly where their eyes will move and what they’ll say.

“A hundred percent of the time, you can see this glare on the floor, it looks really nice,” Todd explained. “The next thing they (visitors) do is look up. If I’ve heard it once, I’ve heard it a thousand times. ‘I love this ceiling, it’s really cool.’”

From the outside, the Pleasantville Gym appears nondescript.

The exterior is entirely white, with the slope of the dome only disturbed by a few rows of windows. Even the gravel parking lot outside seems unremarkable.

But all of this represents progress, the kind that saves structures and strengthens small communities like Pleasantville (an unincorporated community 45 miles south of Terre Haute).

Todd can easily list all of the gym’s shortcomings from six years ago, when he took over as Jefferson Township Trustee and therefore gained control of the gym.

Back doors were missing. Motorcycle tracks were found on the gym floor. Part of the arched roof had rotted out, allowing daylight to flow inside. Conversely, a 10-foot hole was located underneath the north end basket because the floor had rotted through. The lights didn’t work.

And for all the more noticeable warts, the simple fact that there weren’t nets on the rims inside the Pleasantville Gym ate at the core of what the place used to be.

“It was in dire need of some tender love and care,” Todd said.

The gym hosted its first game on Feb. 11, 1955. It was built as a replacement for Pleasantville High School’s former gym, which was located in the basement of the school built in 1916.

For 10 years this new gym housed the Pleasantville High School Blue Streaks, before the high school closed in 1965 and was consolidated into Union High School in Dugger.

Reasons for the school’s closing are simple enough: Enrollment for the 1964-65 school year was just 47 students, making Pleasantville the smallest school in the state.

Even so, that final Blue Streak basketball team won 14 games, a mark Pleasantville reached in each of its final two seasons in existence.

Once the school ceased operations and before the facility became community-focused, it was home to a number of independent basketball teams.

Both Todd and his father, who graduated from Pleasantville, played independent basketball in the gym until the early 1990s.

Once Todd returned and took control of the gym in 2014, work began to restore the gym to a usable state.

Everyone put money into the project to recover the Pleasantville Gym.

Todd did. His friends did. Members of the community did.

First came a $25,000 check from Bear Run Coal Mine, also located in Sullivan County, to put a new metal roof on the gym. Then money slowly trickled in, with community members handing Todd checks for $50 here and $100 there for whatever improvements were next.

The township itself was “broke,” so donations and small fundraisers like 3 v. 3 basketball tournaments and dinners helped pay the way for continued upgrades.

“You can’t imagine how many people came in to help out in the community,” Todd said. “It was a pretty hard road for the first couple of years, but it just seemed like every time we ran out of money, here comes somebody else.”

The gym was back in operational shape by late November 2014, and a celebration took place to mark the occasion.

Todd said official high school games in the gym take place only a couple of times each year.

The event usually sees Dugger Union wear retro jerseys, white with a blue thunderbolt on the front and “P-VILLE” written across the chest, while cheerleaders also dress in Pleasantville-themed attire and lead Pleasantville chants.

“There are all these people coming from the Class of ’65, ’62, ’63, all those, coming to see those Pleasantville uniforms… (to see) the Pleasantville Blue streaks play ball again,” Todd said.

“It was overwhelming,” Todd recounted. “They had me walk out on the center floor with that place packed. I’m not a public speaker…I don’t like crowds to be honest, and I ended up walking out on the center of the floor…I didn’t know what to say. It was amazing.”

Bear Run Coal Mine built a new gravel parking lot for the gym a few years ago. Use of the gym was becoming so frequent, and the crowds so large, that there weren’t enough spots to park.

Todd said there are three basketball leagues that use the gym, keeping it occupied three days a week. In addition, the gym is used by Dugger Union for practices and Todd rents use of the gym to kids from Linton.

He never charges those from Hutsonville, located just 30 miles away across the Wabash River in Illinois, for use of the gym though. Todd said a lot of township residents go to school there, and Hutsonville brought a lot of fans to the gym for the most recent high school game that took place in it between Hutsonville and Dugger Union.

“They want to come back after seeing the gym,” Todd said.

Despite being so instrumental to the present existence of the gym, Todd isn’t concerned about its future.

He remembers growing up right behind the gym and helping clean it as a seven-year old, just so he would be allowed to play on the court on the weekends.

That same connection is being forged now.

“I have third graders coming in there practicing basketball. I have fourth graders, fifth graders, I have all ages of kids coming in here and they’re going to be just like me,” Todd said. “I think somebody will step forward and take care of it.”

He says this out of admiration for the gym and the pride he has for the work done to restore it. But this sentiment also comes from the knowledge that there isn’t much else in Pleasantville left to save.

“All the grocery stores, all the…well everything. There’s nothing here anymore,” Todd said. “It’s just a small town and (the gym) is kinda the last thing standing and all these people who have graduated from the school, they’re still alive and don’t want to see it go.”

Perhaps that’s why being included in this year’s Indiana basketball introduction video meant so much.

“Everybody’s talking about it around town,” Todd said of the Pleasantville gym’s inclusion in the video. “There’s a ton of IU fans around here in this community. Everyone is wearing an IU hat, so for our old gym to be in there, it’s pretty cool.”

It’s been a chance for those in Pleasantville to share what they had already come to cherish.

“Indiana is basketball. That’s us,” Todd said. “Everybody’s forgot about these old gyms. Without the video, without the newspapers coming down and interviewing me, without the Hall of Fame guys, nobody would know it’s there anymore.”

“They forget about it. We brought it back and the publicity has brought everybody to see it.”