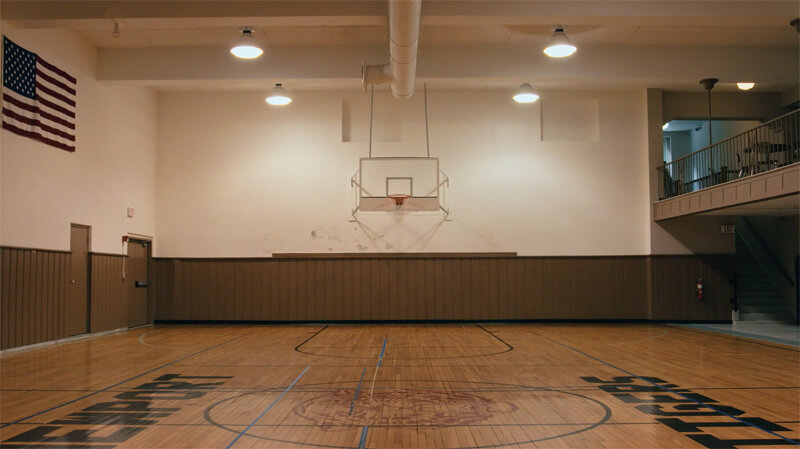 NEWPORT, Ind. — Inside the Vermillion County Public Library, thousands of items are swapped with the thousands of patrons who visit each year.

Most are normal to the environment: Children’s books and DVDs are exchanged and returned, editions of “Moby Dick” and “Don Quixote” are in circulation and residents of the four Vermillion County townships served by the library have a vast collection of literature available.

But amongst the hardback and paperback books are basketballs, ready as the rest to be used by visitors.

The library is on the building’s second floor. Classrooms and storage space can be found on the first floor.

The bottom floor is home to the building’s distinguishing element, a basketball court with a red curtain-clad stage along one of its sides.

Newport High School existed inside the building from the early 1920s until 1964, and all the while the Newport Tigers played on that court.

A snarling, red tiger logo still adorns midcourt in between block letters spelling “NEWPORT” and “TIGERS” although blue and black tape now criss-crosses the hardwood, marking parameters on the floor for pickleball and volleyball games.

It’s been more than 55 years since the gym hosted a high school game, and likely longer since it saw a winning team given Newport’s substandard history in the sport.

The building and gym remain not only intact but connected, an intentional choice by people like Misty Bishop, the director of the library, to retain the essence of the town.

“You get that historic feel in Newport when you’re here,” Bishop said. “The community is so involved with the building and keeping the history.

Although the blueprints have been lost to time, the consensus is that Newport High School spent its final four decades inside the building now housing the library. Newport consolidated into North Vermillion High School in 1964, and for a period after that the old building sat vacant.

It was briefly an elementary school then a community center, but neither occupied the space for very long.

In 2003, the library gained control and moved into the building.

Renovations were done twice in the ensuing 11 years. First there was a million-dollar project to get the building up to code by installing an elevator, a new HVAC system and a new security system, then an additional renovation in 2014 freshened the place up with new carpet and paint.

The structure of the old Newport High School remained the same, a red-brick exterior with plenty of windows, as did the presence of the gym found below ground.

“The gym has been a huge focal point for the library in the past couple years,” Bishop explained.

With a wooden backboard affixed to one of the walls and modern-day glass backboards held in place by stanchions, one has the tools to compare the gym’s past to its present.

But the tape markings on the court act as a constant reminder of the clientele served.

Home plates are outlined in bright yellow tape. A haphazardly drawn 3-point line appears in teal. Random patches of red tape could mean nothing and everything at once.

On a given day the court is a playspace for whoever wants it.

This could mean a chance to shoot hoops, conduct a summer reading seminar, entertain Newport alumni at an annual reunion dinner or host hundreds of people for an indoor easter egg hunt.

The beauty of the gymnasium is in its versatility. Newport’s is no different.

“We try to make it so that when (people) come to the library it’s more of an experience,” Bishop said. “It makes coming to the library a place you want to stay once you’re there.”

Bishop’s desire in this regard is based on logistics as much as anything else.

Vermillion County, established in 1824, is long and narrow, a sliver of land pressed against the Indiana state border with Illinois.

About 40 miles long and 10 miles wide, some county residents must drive 30 minutes to reach the library (the county’s other library is a township library in Clinton).

As such, Bishop uses this as incentive to “hype up” the best things the library can offer those who must travel to the county seat of Newport.

Since becoming the library’s director in June 2011, Bishop has grown the library turnout tenfold, from roughly 1,000 people annually when she started to the nearly 10,000 people who visited in 2019 (a Vermillion County Soil and Water Conservation District office is also located in the building).

“They’re the people who are ultimately paying for the library, so it’s like, ‘What do you want downstairs?'” Bishop said. “‘Oh, you want basketballs so you can go down and practice?’ Sure, we can do that.”

Even prior to her time in charge of one of the few library-gym combinations in existence (gyms in Ancient Greece often had libraries attached), Bishop was a part of the rich basketball tradition in the state.

She’s originally from Hope, Indiana, and played basketball at Hauser High School in Hope from the seventh grade through her senior year.

“It kind of brings back all the joys of basketball,” she said. “Even though I don’t do it all the time, it’s like, ‘Oh yeah, that’s part of who I am.'”

Attention concerning the old Newport gym came not only with its inclusion in this season’s Indiana basketball introduction video, but also last year when members of The Hoosier Hardwood Photo Project came to town to photograph the gym.

Bishop said some of those photos are now in the Indiana Basketball Hall of Fame, helping bring further awareness to an area not usually in the spotlight.

“It’s exciting for me because a lot of people don’t know the library is here,” Bishop said. “Vermillion County doesn’t have a lot of publicity…we always like to say we’re the best kept secret in Vermillion County because we’re kind of hidden down here.”

Based on basketball pedigree, and athletic success in general, Newport’s home court should no longer exist.

The Tigers, a member of the Vermillion County Conference (VCC), took part in the state tournament each year from 1915 to 1964, failing to win even a sectional title (Of the VCC’s eight members, seven of them left via consolidation. Only Clinton, which won 12 sectionals in its 21 years in the VCC, left as its own school).

There is no record of Newport winning a state championship in any sport, and any trace of the school’s athletic involvement has been reduced to old IHSAA handbooks and surviving copies of the school yearbook “The Flashlight.”

You can’t read much about Newport’s past. But you can stare at it, dribble on it and survive with it into the future.

North Vermillion Elementary School, located in nearby Cayuga, uses the court for practices.

The annual Newport Antique Auto Hill Climb (in which thousands of people gather to drive cars up an 1,800-foot-long, 140-foot-tall hill) in Newport acts as an event naturally funneling people to town, where they visit the library and see the gym and wonder about the stories that took place within its baselines.

Long-term plans for the library don’t necessarily involve the gym, because it’s always been there and will continue to be.

Bishop wants to make the library more mobile and find a way to take its programming on the road. The library has also gone “fines free,” eliminating fines and late fees (except those for damaged or lost books) for patrons to encourage people to continue to make use of the resource.

Bishop has also dealt with people stealing basketballs from the library after checking them out, something that can only be described as a stereotypically Indiana problem.

It’s one she will have to continue to monitor as well.

As a concept, the library is one of the last great community cornerstones in this country. It delivers what those who use it request.

In Indiana, that is a basketball and a gym to play in.

The Vermillion County Public Library is featured once in the 2019-20 Indiana men’s basketball introduction video at the 0:40 mark. The video can be seen here.