After the Hoosiers grabbed a three-point advantage (28-25) at the 3:47 mark of the first half, they allowed Purdue a 29-10 run over the next 10:48 of game action. What was one a three-point cushion became a 16-point deficit, a 19-point swing that proved to be the deciding sequence in Indiana’s fourth straight loss.

So what what wrong? While Indiana turned the ball over some during this stretch, the Hoosiers also had trouble containing Purdue’s left wing handoff and ball screen action. The Boilermakers continued to out-execute Indiana, gaining an advantage off the perimeter and picking apart Indiana’s defense from there. After allowing 1.13 points per possession to Purdue on Saturday, the Hoosiers are now 10th in the Big Ten conference in terms of defensive efficiency (1.04). They’re also allowing conference opponents to hit from distance at a 35 percent clip, which ranks 11th.

A look at Indiana’s defensive issues during Purdue’s run in the latest edition of Film Session:

Down three and starting their 29-10 run, Trevion Williams dribbles to the left wing. Jahaad Proctor cuts out of the left corner, aided by a bit of a down screen from Aaron Wheeler: 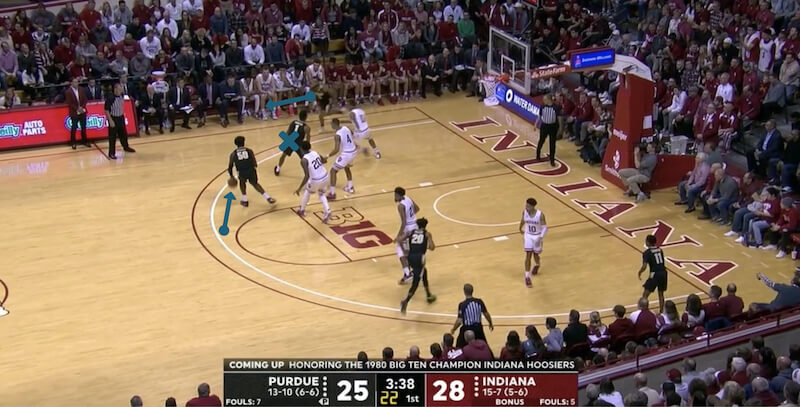 Williams hands off to Proctor. Trayce Jackson-Davis points to De’Ron Davis to hedge on Proctor as he’ll snag Williams on the roll and impede his progress: 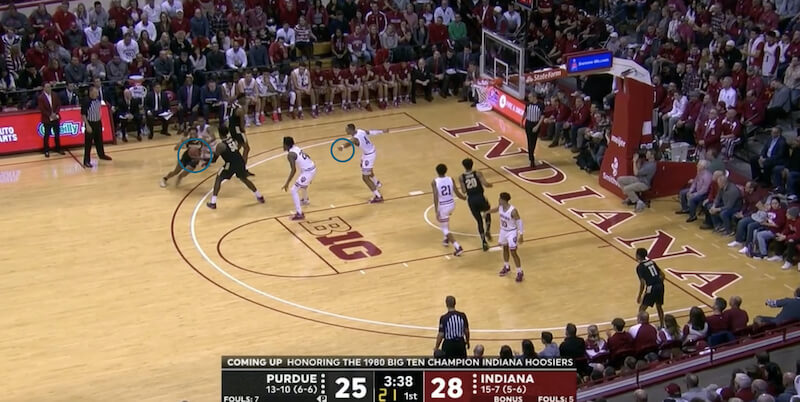 Proctor gets downhill to the paint as Davis and Devonte Green chase. Jackson-Davis jams up Williams. But this leaves Wheeler space on the perimeter: 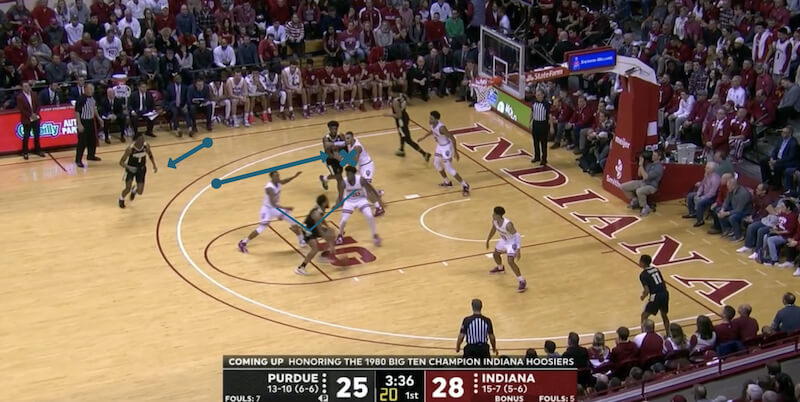 Jackson-Davis first moves to rotate back out to Wheeler, but this allows Williams space towards the basket as Proctor picks up his dribble: 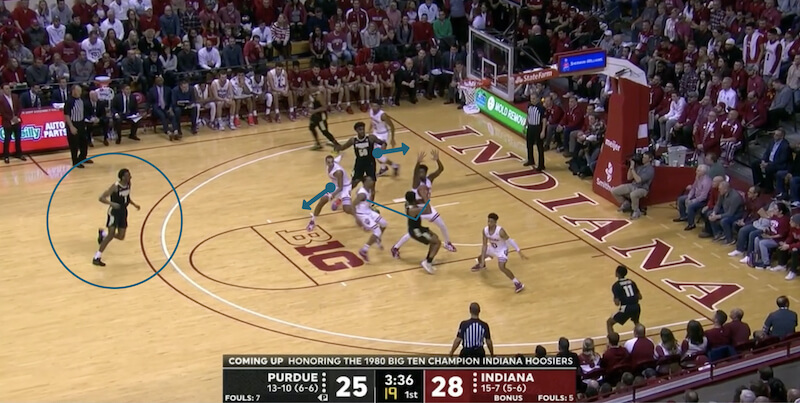 Proctor zips the pass around Davis and this means Jackson-Davis will stay in the paint: 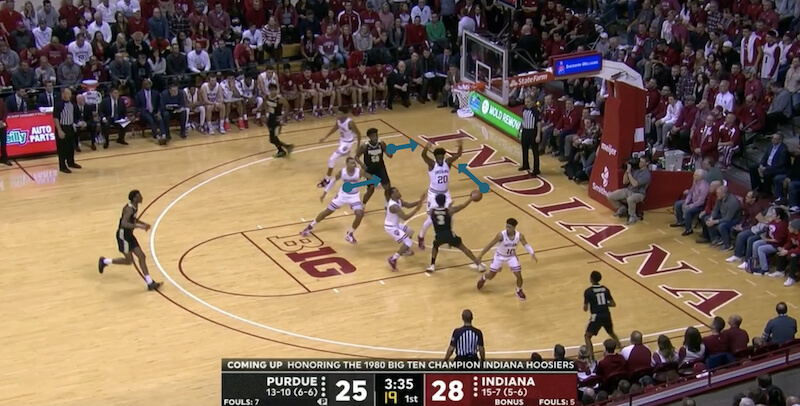 Jackson-Davis impedes a shot from Williams. But that means Wheeler is still free at the top of the key: 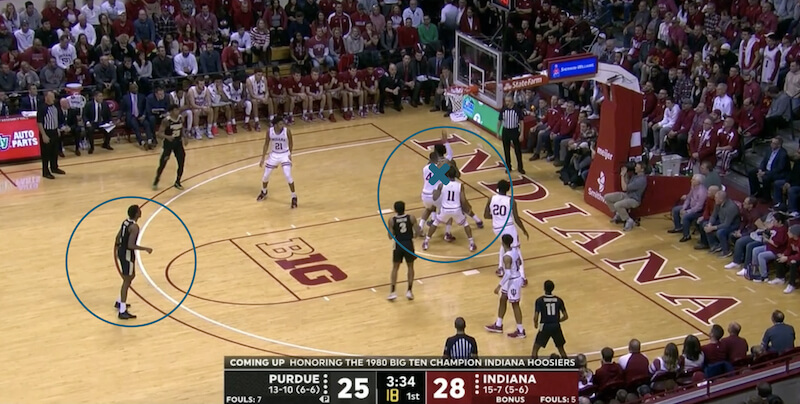 Williams whips the pass up top: 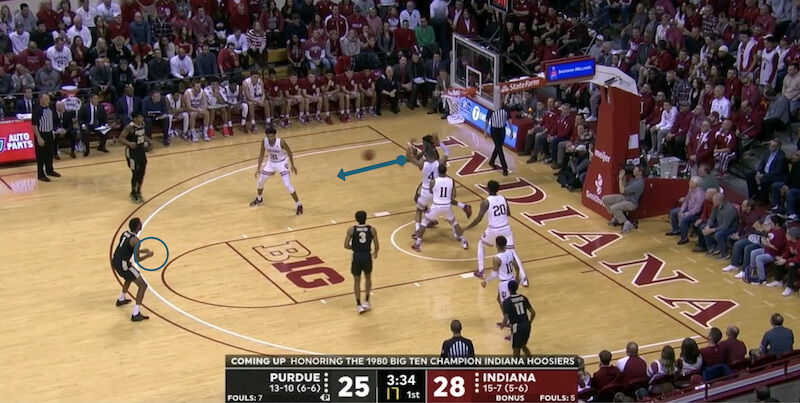 Wheeler is able to get the shot off and hit as Green’s closeout isn’t anywhere close: 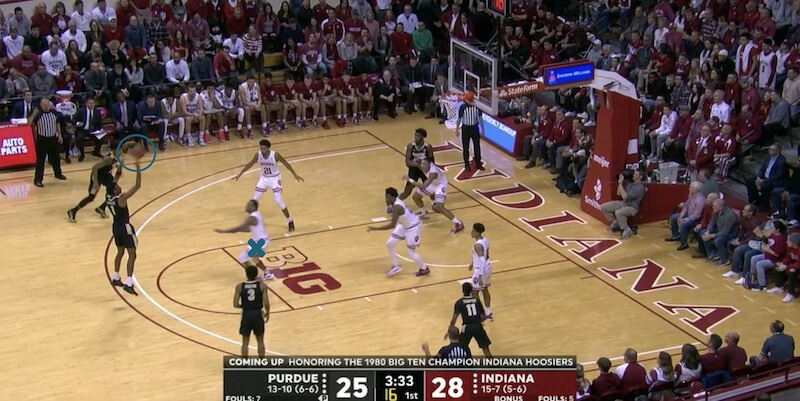 With Davis sticking with the ball handler hard all the way down to the paint as Green trailed, it gave Jackson-Davis no opportunity to rotate back out to Wheeler, lest he leave Williams open at the rim. And with Green deciding to double twice in the paint, it gave Wheeler plenty of space to catch and shoot as Williams made the quick, smart pass out to him.