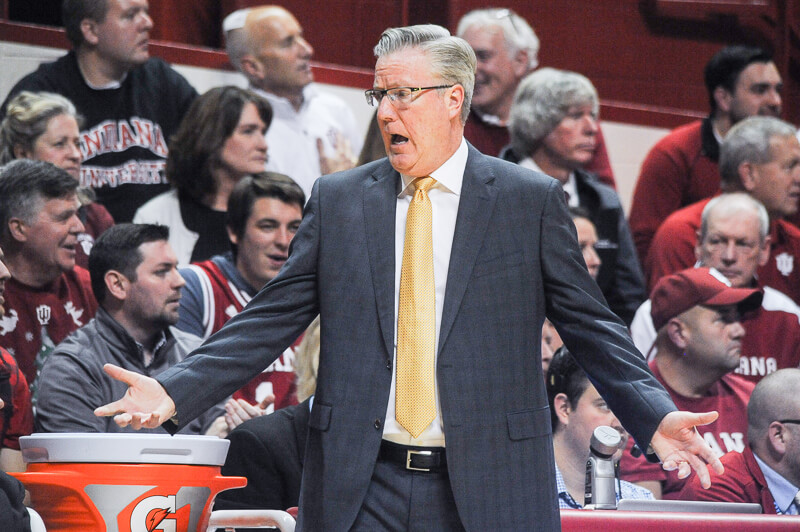 With the start of college basketball season on the horizon, we’ll be taking a long look at the conference at large as well as Indiana’s roster over the next month. Today, our Big Ten team previews continue with a look at Iowa. (Previously: Rutgers, Minnesota, Northwestern, Illinois, Penn State)

After reaching the NCAA tournament for three straight seasons from 2014 to 2016, Iowa has fallen back into the bottom half of the Big Ten the past two seasons.

Some regression in Iowa City was expected after graduating Jarrod Uthoff, Anthony Clemmons, Adam Woodbury and Mike Gesell in 2016, but the Hawkeyes made the NIT in 2017 and missed the postseason completely last season.

Despite those struggles, a contract buyout of $9 million ensures Fran McCaffery will be at the helm for the foreseeable future. Given that he returns every notable piece from last season’s roster, this season will be an interesting case study of McCaffery’s coaching ability.

The clear leaders of this Iowa’s team are juniors Jordan Bohannon and Tyler Cook. Bohannon is one of the league’s best point guards while Cook has NBA potential in the frontcourt.

Bohannon is coming off of a sophomore season in which he averaged 13.5 points and 5.4 assists in 31.8 minutes per game. He shot an efficient 43 percent on 3s and 90.4 percent from the free throw line.

The 6-foot-9 Cook was the league’s ninth best offensive rebounder and the 11th best defensive rebounder. He averaged a team-high 15.3 points and 6.8 rebounds per game. Cook tested the NBA draft process before opting to return to school.

The Hawkeyes return two other double figure scorers in redshirt junior Isaiah Moss and sophomore Luka Garza. Like Cook, Moss tested the NBA draft process, but got little traction. He was seventh in league play in 3-point shooting last season (42.1 percent) and averaged 11.1 points per game.

Garza was one of the Big Ten’s best freshmen a season ago as he averaged 12.1 points and 6.4 rebounds per game. He was the league’s fourth best offensive rebounder and finished close to 59 percent of his 2s in conference play. He had offseason surgery to remove a benign cyst in his abdomen, but is expected to be ready for the start of the season.

Evansville native Jack Nunge, a sophomore, also showed flashes of potential as a freshman. A 6-foot-11 forward who prefers to play on the perimeter, Nunge started 14 of Iowa’s 33 games last season.

As has frequently been the case under McCaffery, the Iowa rotation will be deep again this season. In the backcourt, freshmen C.J. Fredrick and Joe Wieskamp both arrive to join returnee Maishe Dailey. McCaffery’s son, Connor, is also expected to be a part of the rotation and play some point guard. Wieskamp was the Gatorade player of the year in Iowa last season and can play in the backcourt or on the wing.

Up front, do-everything forward Nicolas Baer is back for his senior season and post options Cordell Pemsl and Ryan Kriener also return.

Offensively, Iowa should be one of the Big Ten’s best teams again. The Hawkeyes had the nation’s 19th best offensive last season and were fifth in league play in points per possession.

Defense, however, will tell the final story of the 2018-2019 Hawkeyes. Iowa was the Big Ten’s worst defensive team last season by a significant margin and if that doesn’t improve, the inconsistent results are likely to continue. Iowa allowed 1.19 points per trip last season in Big Ten games, which is the second worst defense for a conference team ever in the Ken Pomeroy era.

Bottom Line: With two of the Big Ten’s top 15 players, Iowa has a chance to be a dangerous team in a league that appears to be wide open. But unless the defense improves significantly, the Hawkeyes are unlikely to crack the top half of the league standings. McCaffery and the Iowa players will say all of the right things in the preseason about the program’s defensive improvements in the offseason, but until tangible evidence is presented, skepticism about the Hawkeyes is warranted.

Quotable: “He’s been great. Tyler’s been showing great leadership. I’m excited about that … Now, he realizes being our leading returning scorer and rebounder — he’ll get help from Nicholas Baer, Jordan Bohannon and others, but Tyler has kind of accepted that role — kind of what Pete (Jok) was a couple years ago.” – McCaffery back in August on Tyler Cook.