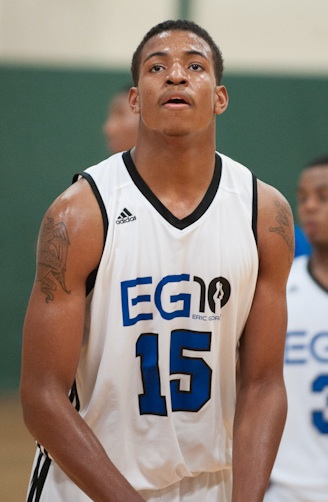 “Freshman Focus” is an Inside the Hall series on each of Indiana’s six incoming freshman. Over the last week and a half, we’ve examined the impact each freshman can have for the Hoosiers next season. Today, our series concludes with Devin Davis.

When Devin Davis’ high school season ended at Warren Central in February, he didn’t wait long to get back to work and begin preparing for his freshman season at Indiana. Davis took about a week off to rest, then got right back to work.

“His dad said [Devin] will call him at odd hours and say, ‘Dad, I wanna get in the gym,'” said Matt Green, Davis’ AAU coach with the Eric  Gordon All-Stars. “You used to have to tell him to go work out. It’s not that way anymore.”

When Indiana’s basketball season begins next winter, Davis won’t be relied upon to score many points or take many shots. The offense won’t be run through him.

But that doesn’t mean Davis, who was the first in the 2013 class to sign with Indiana, won’t make an impact for the Hoosiers as a freshman next season.

“One of the areas he fits in is being that high energy guy off the bench that can come in and maybe provide that spark,” Green said. “He can defend different positions, rebound the basketball. There’s always time for those types of guys.”

Davis, a 6-foot-6 forward who is unranked by ESPN.com, will arrive on campus on Sunday to begin working out with his new teammates and preparing for his collegiate career. During the offseason, Davis has spent time working with Eric Gordon Sr. on ways to get by his man and score at the rim, along with a number  of other areas of his game.

“He’s worked on his ball handling, just different ways to score the basketball, being able to attack the basket,” Green said. “He’s definitely been working on his jump shot, trying to extend his range and how his form is so he can shoot it at a high level.”

Davis has struggled with his perimeter jump shot throughout his high school career, but he continues to work on it and has developed a fairly reliable mid-range game. He also handles the ball well for his size and is an above-average rebounder.

Davis averaged 17 points and eight rebounds per game in his senior season at Warren Central.

“Rebounding’s more of an instinctual thing as to knowing where the ball is going to come off and having the willingness and the drive,” Green said. “It’s just effort. His drive and effort to want to get the basketball off the missed shot is greater than most people’s.”

Stanford Robinson — “He doesn’t need somebody to drag him up there [to the weight room]. I don’t think he’s a buddy workout guy.”

Collin Hartman — “He’s always gonna find a place to get shots up. That’s never gonna be a problem.”

Luke Fischer — “Once he seals, it’s over, he’s gonna score.”

Noah Vonleh — “Have you shaken his hand yet? Go shake his hand. It’s as hard as a catcher’s mitt.”

Troy Williams — “He has no illusions of being one and done like a lot of kids.”