In the second half of Indiana’s win over Stetson, the Hoosiers stacked up three alley-oops by sneaking behind the Hatters’ 2-3 zone defense. A look at how it was accomplished in the latest edition of Film Session. 1) CODY ZELLER ...

Sandwiched between last Wednesday’s come-from-behind win at N.C. State and a meeting with No. 1 Kentucky, Sunday’s meeting with Stetson produced arguably the worst first half of the season to date for Indiana. The Hoosiers went to the locker room ... 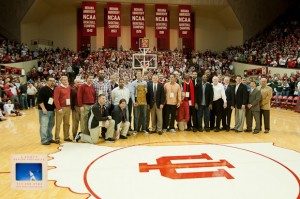 Check out 21 photos by Jamie Owens from Indiana’s 84-50 win over Stetson at Assembly Hall, as well as the 1987 NCAA Championship’s reunion, in the embedded photo gallery after the jump.

Watch and listen to Indiana coach Tom Crean react to the Hoosiers’ 84-50 win over Stetson on Sunday at Assembly Hall in high-definition video in the embedded media player below:

Watch and listen to Daniel Moore, Verdell Jones and Victor Oladipo react to Indiana’s 84-50 win over Stetson on Sunday at Assembly Hall in high-definition video in the embedded media player below:

Note: This game will only be broadcast live on BTN.com. It will be replayed on Monday, Dec. 5 at 7PM on the Big Ten Network. Indiana vs. Stetson

Oladipo: Hulls is our leader

The Hoosiers needed a basket. They were ahead just 76-75 after an N.C. State basket Wednesday night, and the shot clock was running down. Somebody had to step up. Jordan Hulls did. The junior point guard hit a dagger 3-pointer ...

What to Expect: Stetson

After a stern test in Raleigh, the Hoosiers return to Assembly Hall for a Sunday matinee with the Stetson Hatters out of the Atlantic Sun conference. The game will be shown on BTN.com and broadcast on the IU radio network ...