At the start of the game on Wednesday night, Princeton threw a defensive counter at the Hoosiers. Instead of letting Indiana’s bigs get comfortable on their way to quick buckets or fouls, the Tigers threw double teams at Indiana’s bigs. ...

What is your prediction for IU-UNC? Shooting struggles for Jalen Hood-Schifino Some thoughts from CoachSS after Wednesday's win 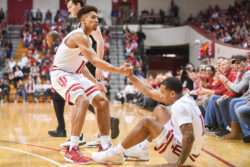 Indiana moved to 5-0 this season with a comfortable 79-54 win over Princeton on Wednesday night at Simon Skjodt Assembly Hall. Here’s a look at five takeaways from the win over the Tigers: · Devonte the playmaker: In only his ...

What has Indiana done from 3-point range on offense and defense this season? 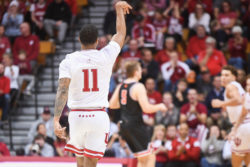 Devonte Green stepped back, swished the shot and sealed it all with a kiss. As part of a 9-0 scoring run late in the second half of Wednesday night’s win over Princeton, Indiana’s senior guard splashed in his second 3-pointer ...

The Minute After: Princeton 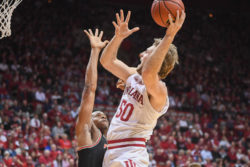 Thoughts on a 79-54 win against the Tigers: Entering tonight’s game, Indiana’s offense has imposed its will on the opponent. The Hoosiers want to get the ball up the court quick for easy points. Involve the bigs. Draw fouls. They’ve ... 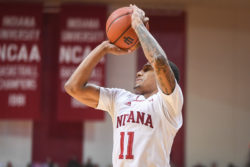 Joey Brunk and Devonte Green met with the media following Indiana’s 79-54 win over Princeton on Wednesday at Simon Skjodt Assembly Hall. Watch their postgame comments below:

What to expect: Princeton

Indiana will look for its fifth straight win on Wednesday night when it hosts Princeton at Simon Skjodt Assembly Hall. The Tigers are 0-3 with losses to Duquesne, San Francisco and Lafayette. The game will be broadcast at 7 p.m. ...