The Minute After: Princeton 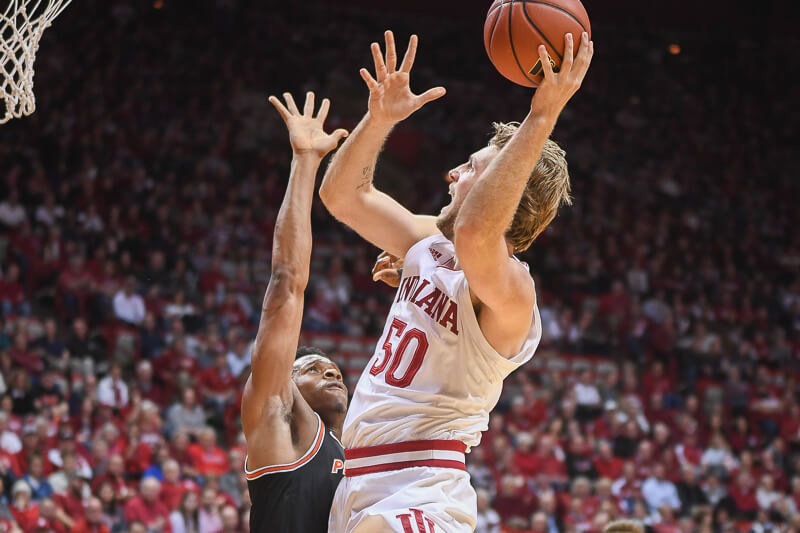 Entering tonight’s game, Indiana’s offense has imposed its will on the opponent. The Hoosiers want to get the ball up the court quick for easy points. Involve the bigs. Draw fouls. They’ve largely succeeded in this endeavor. Through four games, Indiana had amassed the fifth highest free throw rate in the country. And when shots haven’t fallen, Indiana’s cleaned up on the offensive glass. Its offensive rebounding percentage ranked ninth in the country before tonight’s contest.

On down the line, Indiana’s offensive profile through four games has been strong. The Hoosiers are shooting 60.5 percent on 2s (13th in the country) and have an effective field goal percentage of 58.7 (20th in country). They’re making their free throws (74.6 percent) and not turning it over much (15.7 turnover percentage).

But Princeton came in with a gameplan tonight that threw the Hoosiers off course on offense. The Tigers doubled the post and the points didn’t come so easy for Indiana’s bigs. They also didn’t put Indiana to the line until the 11:49 mark of the first half, a huge departure from the last couple of games where the Hoosiers got to the line immediately and established themselves. Princeton likes a slower pace and the Hoosiers were lulled into it at times. For the first time this season, Indiana’s opponent successfully took away its first option and what it likes to do.

Indiana was able to get some good shots in the flow of its offense regardless, but they weren’t all falling. And after the good shots weren’t falling, the Hoosiers then settled on being an ill-advised jump shooting team for a stretch, taking early shots from the mid-range instead of continuing to work the ball.

Indiana indeed adjusted and responded in a big way in the second half. Instead of passing it into the post and having to work out of the double team, the Hoosiers started having their bigs set ball screens on the wing, freeing them up to roll to the rim for better looks and less defenders to worry about. It worked. Devonte Green started the second half in place of Armaan Franklin and he made things go. Green’s floor vision was stellar in the second half. He knew what to do and when to do it. Green pumped in 10 points after the break, including a 3-of-3 mark from the line and a nasty stepback 3-pointer. He also dished out two assists.

Indiana’s defense also turned things up after the break. Princeton shot it relatively well in the first half (12-of-26), but after the break shot just 7-of-25, including a dismal 2-of-13 mark from distance. Princeton center Richmond Aririguzoh, a big point of focus for the IU defense coming into this one, scored just four points for the game after coming in averaging 17.3.

In the end, it’s Indiana’s fourth win by 20 or more points on the season, another win against a weak opponent. But Princeton’s defense gave the Hoosiers a look that made them a bit uncomfortable to start the game. And that’s probably a good thing.

Because Indiana’s bound to have a better opponent do the same thing at some point. Maybe soon. And tonight’s game gave the Hoosiers an opportunity to work through it and figure things out.