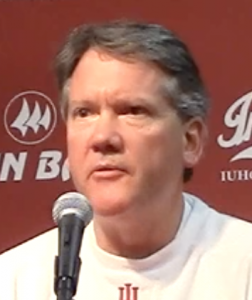 Tom Crean, athletics director Fred Glass and vice president of capital planning and facilities Tom Morrison met with the media on Tuesday evening to discuss the decision to postgame IU’s game with Iowa after a piece of metal fell into ...

Indiana’s game with No. 15 Iowa scheduled for tonight in Assembly Hall has been postponed, the university has announced, after a piece of metal fell from the roof of the building at roughly 2:30 p.m. and damaged seating. Here are ...

A perfect match: Everyone emerges as a winner in Assembly Hall renovation

One by one on Thursday afternoon they spoke, smiles abundant. It was a joyous day on the floor of Assembly Hall and one that will change the course of history for the building. In a 25-minute ceremony that included speeches ...

Indiana athletics director Fred Glass met with the media on Thursday afternoon to discuss $40 million in renovations coming to Assembly Hall that will be completed by 2016. Watch the press conference in the media player below:

Check out four renderings from IU’s plans for a renovated Assembly Hall in the embedded photo gallery after the jump, courtesy of IU Athletics.

Indiana to rename Assembly Hall to Simon Skjodt Assembly Hall, $40 million in renovations to be completed by 2016

Update: Per a pair of tweets from Bob Kravitz, Assembly Hall will be renamed Simon Skjodt Assembly Hall in 2016 after $40 million in renovations to the building are complete. — Indiana University president Michael McRobbie will make a “major ...

Fred Glass knows how the script goes. From growing up in the Indianapolis area, to now as Indiana's athletics director, Glass would watch the same scene play out over and over, year after year: Opponents would enter Assembly Hall optimistic, maybe even confident, and then after looking up at the wall of 17,400-plus fans clad in cream and crimson "going absolutely crazy," they cringe. They unravel. In a world of college basketball that has become increasingly known for its games being played in multi-purpose arenas, Indiana's Assembly Hall is becoming the anomaly. Since the 1971-1972 season, the building has been home to three national champions. The tradition, the history, even the angle of the building's seating in relation to the court, is exactly what makes Assembly Hall different from any other college basketball venue. And for Glass, being far from the norm is exactly what he wants. "When the lights come on, Gus Johnson doesn’t need to say you’re in Assembly Hall," Glass told Inside the Hall in an interview in his office at Memorial Stadium earlier this week. "You know you’re in Assembly Hall." But for a building that has been around for more than 40 years, it has flaws. The steps are at different lengths. Not all the seating is considered "premier." A segment of fans want the building torn down and replaced with a new, state-of-the-art arena. That's not happening, Glass said. But he is quick to admit Assembly Hall needs renovations, especially to make it more "fan-friendly." He is ready to lead that effort.

Tradition is a huge part of what makes Assembly Hall so special to Indiana fans. So perhaps that’s why today’s revelation that the Big Ten logo has been added to Branch McCracken Court will take some getting used to. Via ...

At the suggestion of one of our readers, we’d like to give you a chance to sound off on our current poll question. If you haven’t checked the results, the response has been one-sided to this point: 88% of you ...

I’ve already said my piece on attendance at Assembly Hall this year, but since then and the addition of the $5 tickets in the balcony, attendance hasn’t been too shabby. If you make it cheaper, they will come. Sunday against ...

And now, we shall discuss the low attendance inside Assembly Hall

It’s no secret that attendance INSIDE THE HALL this season has not been very good, at least in terms of what we’ve come to expect. We’ve come to expect sellouts or near sellouts, so when that doesn’t happen, it becomes ...