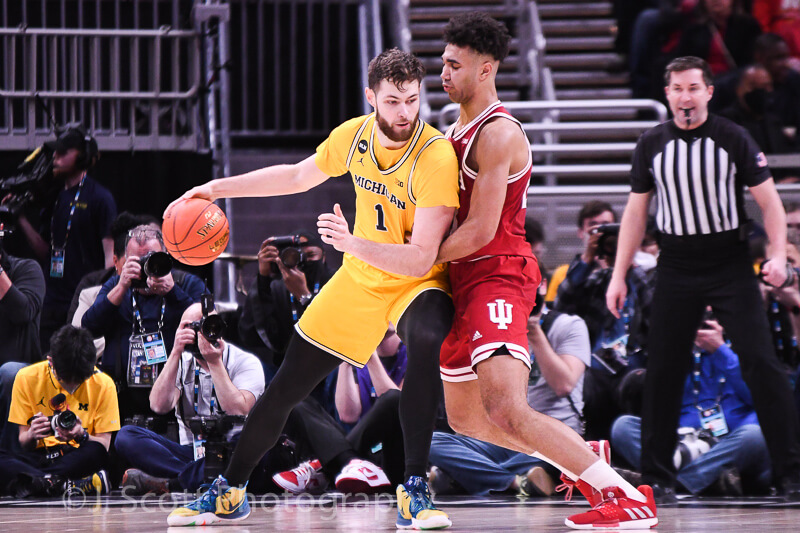 The Big Ten advanced only two teams to the second weekend of the 2022 NCAA tournament and has a 9-7 record through 16 games.

No. 3 seed Purdue is the highest-seeded Big Ten team remaining followed by No. 11 seed Michigan. In the preseason, the Boilermakers and Wolverines were picked to finish at the top of the league standings.

Here’s a look at the Big Ten matchups in the NCAA tournament Sweet Sixteen:

It’s been a roller coaster season for Juwan Howard and Michigan, but the Wolverines are one of the most talented teams in the conference and have proven to be a difficult out in March. After falling 74-69 to Indiana in the Big Ten tournament, Michigan had a week off before it knocked off Colorado State at Gainbridge Fieldhouse in Indianapolis. The Wolverines trailed by as many as 15 in the first half before pulling away from the Rams late for a 75-63 victory.

Michigan then got dominating performances from Hunter Dickinson (27 points, 11 rebounds) and Eli Brooks (23 points) in a 76-68 victory over No. 3 seed Tennessee to advance to the Sweet Sixteen for a fifth straight season.

The Wolverines will be an underdog on Thursday when it travels south to San Antonio to take on Villanova. The Wildcats have won seven straight games and appear to be peaking at the right time. Villanova has the nation’s eighth-best offense, according to KenPom, and the 30th best defense.

How Villanova defends Dickinson will be an interesting storyline in the game. The Wildcats don’t have a big with comparable size and will have to send help to defend the Michigan center. The flip side to that, however, is that Villanova’s smaller frontcourt should be able to effectively space the floor and force Dickinson to defend away from the basket. That is not his strong suit. Given its postseason pedigree and the fact that it has an All-American point guard in Collin Gillespie, it’s no surprise that Villanova is the favorite to advance to the Elite Eight.

The Boilermakers had a comfortable win over Yale to open the NCAA tournament and then beat Texas by 10 to advance to the Sweet Sixteen.

The storyline in this game, however, is the unlikely opponent for Purdue. Saint Peter’s, the champions of the Metro Atlantic Athletic Conference, are the story of the NCAA tournament thus far.

In the opening round, the Peacocks stunned the college basketball world with an upset of No. 2 seed Kentucky in Indianapolis. Saint Peter’s followed that up with a 70-60 win over Murray State to advance to the Sweet Sixteen. Remarkably, Saint Peter’s won two NCAA tournament games and is ranked just 226th nationally in adjusted offensive efficiency, per KenPom.

What does Saint Peter’s have left in the tank? We’ll find out on Friday evening. On paper, this looks like a mismatch in favor of Purdue. Jaden Ivey is playing as well as any guard in college basketball and the duo of Zach Edey and Trevion Williams is tough for any team to cover. For a team with the limited size of Saint Peter’s, it’s an even tougher task.

With Kentucky and Baylor already eliminated from the bracket, this is a golden opportunity for Purdue to reach the Final Four for the first time since 1980 and for just the third time in program history. If the Boilermakers can knock off Cinderella, a Sunday matchup against the winner of UCLA-North Carolina awaits. Unsurprisingly, Purdue is a double-digit favorite against Saint Peter’s on Friday with the Vegas line currently sitting at Purdue -12.5.